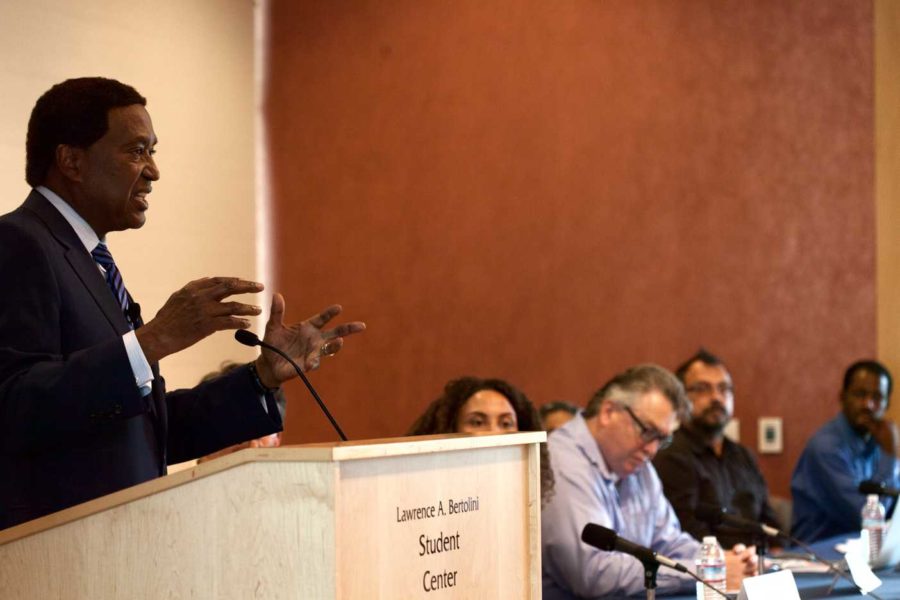 The seven panel members, including Burris, unanimously agreed that recent national and local accounts demonstrate an undercurrent of police brutality, a double standard of policing and an implicit bias inherent within the criminal justice system.

“Racial profiling essentially means that you substitute race with probable cause,” Burris said.

He cited that African-American and Hispanic males are arrested at a rate six to eight times greater than those in white communities, despite similar frequencies of marijuana use.

Burris urged the audience to consider the fine line between legitimate law enforcement and police brutality. “An officer has the right to react in certain situations and the information that may cause him to stop a particular person,” he said.

“You might think it’s police brutality, but the police think they’re doing their job.”

For example, Sonoma County sheriff’s deputy Erick Gelhaus shot 13-year-old Andy Lopez because he thought Lopez had a gun, only to be proven wrong.

“The police have a right to be safe, but that doesn’t mean that in order to be safe, [they] get to shoot whenever [they] want to shoot,” Burris said.

Burris said the use of video footage in the Rodney King case was revolutionary, encouraging the audience to use video cameras vigilantly in public.

“Before 1991, you could not have police brutality cases of that kind because people would not believe it, because they don’t want to believe that the police would engage in this level of brutality,” he said. Burris added that video clips serve as evidence that can trump police statements.

“We’ve had, for a number of years, some severe dysfunction in the Junior College’s police department,” he said. “There are many accusations, which at this point are not proven, but that demonstrate some level of dysfunction that’s been ongoing.”

Santa Rosa Copwatch activist Raquel Mack stressed the lack of access to constitutional protections for black and brown youth, the most vulnerable of American citizens.

“The loss of black and brown life at the hands of police without any real accountability, justice or policy change must stop,” she said. “It’s our responsibility as American citizens, as descendants of those who gave the ultimate sacrifice to demand that our rights be protected, that our judicial system is transparent, and that our humanity is restored.”

Hale said he developed a sense of survivor’s guilt as a white male who went to college after growing up in a multicultural neighborhood in Los Angeles.

“Many of the people that I grew up around didn’t make it out. They were in prison, or they were shot. In the riots they had M16s pointed right at their heads,” he said. “I understand very clearly that while I did many of the foolish things that a lot of young people did, I was not subject to the same levels of brutality, the same levels of harassment, the same levels of being basically over-policed and underprotected.”

Dr. Hale said it is important for young people to become activists and intellectuals, despite the easy trap of nihilism. “How do we not just ignore the crises that are going around us? I see it all around me, this sort of total checking out into escape. How do we avoid that? How do we avoid the trap of fear, paranoia and hatred?” he asked.

“Students have good hearts and good minds,” Hale said. He encouraged professors to support students who are processing feelings of rage and confusion. “Allow their good hearts and allow a space for that pain, that fear and that rage to get transformed into sorting out those ideas, figuring where they stand within these issues and joining national conversations,” he said.

Women’s Justice Center advocate Taylor Anderson-Stevenson brought up the absence of women in law enforcement. She cited a Los Angeles Police Department study that revealed that an increased number of female officers decreased the level of excessive force.

“It’s an abuse predominantly committed by male officers,” she said. “I think if we increase the number of women in policing to 50 percent or more, you will see a dramatic drop in excessive force and police brutality.”

While other speakers addressed specific aspects of police brutality, Damion Square, co-founder of the SRJC Black Student Union, implored the audience to recognize the covert root of racism. He said the fear of white genetic annihilation drives the incarcerations of millions of black men to remove their genetic material from the population.

Square said African-Americans must remain calm, serious and focused to raise awareness to this systemic problem.

“We have the opportunity as the first predominantly white college to come out publicly and take an affirmative stance against white supremacy,” Square said.

In a follow-up interview, Burris said he was not surprised by the police department’s absence at the event, stating that they are unlikely to be in an environment where they will be criticized.

Burris said open discussions between the police and the community are needed to resolve the longstanding issue.