Ambassador issues a passport to the world 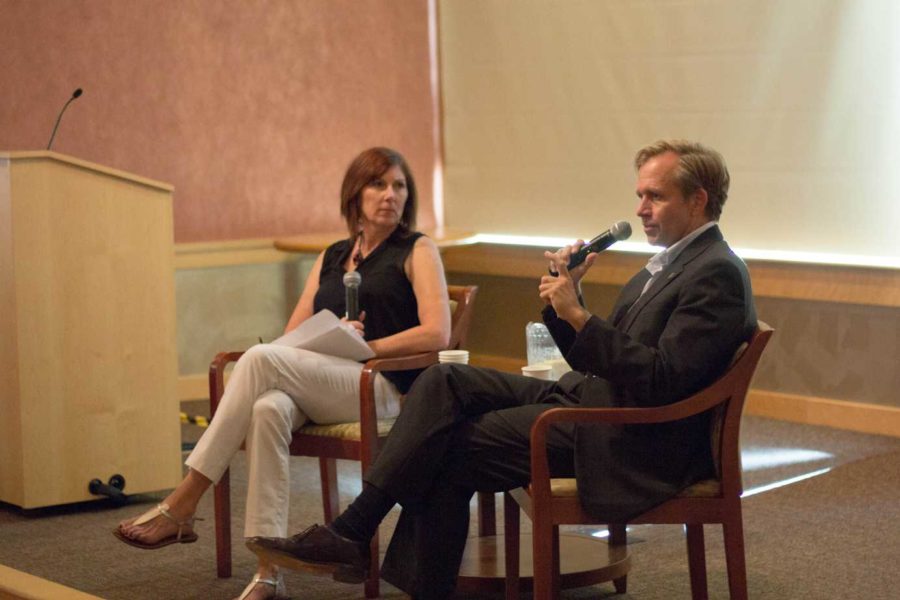 U.S. Ambassador Lewis Lukens explained how the State Department addresses global threats, shared his experiences abroad, promoted the importance of becoming a global citizen and  encouraged a career in the Foreign Service during “Passport to the World,” a Q-and-A session noon Sept. 15 in the SRJC Bertolini Student Center.

“This is a world in which other people in other societies will inevitably have their own realities, not always identical to ours; it does not mean we have to accept those perspectives or agree with them or indulge them — but it does mean that understanding them is the starting point for sensible policy,” Ambassador Lukens said. “It’s a world in which there’s no substitute for careful priorities in the application of American power and purpose, but it’s also a world in which the power of our example and our generosity of spirit can open the door to profound advances.”

Huy Pham, president of the SRJC International Club, worked closely with  Dr. Brian Phifer, multicultural events chair and assistant director of student affairs, to contact Ambassador Lukens in July while he was still in Washington, D.C.
“I wanted to do something really special to elevate the reputation of our campus,” Pham said. “His appearance can be an emphasis on both our school’s international programs to earn support from the community.”

Pham asked SRJC political science instructor Jeanette Ben Farhat to moderate the Q-and-A session with the Ambassador. “Having a moderator who understands politics is very helpful in narrowing down questions [from the] audience for the Ambassador,” he said.

Many questions from audience members concerned timely issues, such as the Islamic State of Iraq and the Levant (ISIL) and the recent Ebola outbreak, or were related to Lukens’ post in Senegal and Guinea-Bissau.
Ben Farhat said she was pleased by Ambassador Lukens’ extensive experience and ability to distinguish the challenges facing developing countries like Senegal and Guinea-Bissau and countries struggling to transition to democracy like Senegal and Iraq.

“The challenge of building strong states and sustainable economies, especially in former colonies, is an issue I discuss at length in my International Relations class,” she said.

“We really believe that by encouraging trade, economic development and economic connections, we can help grow the middle class in these countries that will then spur local economic growth.”
Lukens stressed the importance of staying engaged in the world, whether through trade promotion or the aid approach, despite our own domestic challenges.

“One of the greatest challenges of advocating for human rights, especially LGBT rights, as U.S. ambassador, comes from encountering criticisms of highly controversial U.S. policies, such as the death penalty,”  Lukens said.

He also emphasized the importance of a civil society and free media as essential foundations for a democracy. “You need a civil society as a counterbalance to the government, and you need free, independent press that can report to the people what’s happening, without fear of imprisonment or worse,” he said.

Lukens recognized that many countries struggle with democracy as a result of the historical borders built by colonial powers.

Lukens went on to say the State Department recruits people from a wide variety of backgrounds to reflect the diversity of the U.S. and represent American values to audiences across the world.

“I was heartened to learn that women were well-represented in postings all over the world and could advance to the highest levels of the service,” Ben Farhat said. “I was actually a little shocked to learn that past policy was to remove women from their foreign postings if they got married.”

Working in the U.S. Foreign Service to service the American people is one of the most rewarding careers,  Lukens said. “Being ambassador is a huge honor and privilege. To serve as the President’s personal representative in a country is really an incredible experience, a once-in-a-lifetime experience,” he said. “I encourage all of you to seize the opportunity to travel, work and study overseas.”

He said students interested in working for the Foreign Service should take international relations classes and learn as many languages as possible. “If you don’t speak a foreign language, we can teach you,” he said. The State Department has many intensive language programs of varying durations depending on the language. For example, German usually takes two months, whereas Mandarin takes two years.

Ben Farhat said, “Many students ask me about about the Foreign Service exam and how to prepare for it, so I was glad to see that the State Department has made the exam process more transparent and that Diplomats in Residence like Ambassador Lukens are reaching out to encourage students to explore careers in the State Department.”

“He definitely understands all aspects of international education to share with students,” Pham said.

Elton Largoba, a student from Guinea-Bissau was happy to come to the event and greet Ambassador Lukens.

Pham added that international students who couldn’t attend still closely followed up with the event. Other members enthusiastic about international politics and foreign services came to see federal officials and asked questions about the U.S position in current international affairs.

“Most importantly, I ask you to remember that no matter where you are or what you do, you can make a huge difference in your communities in the world,” Ambassador Lukens said. “This is a world with no shortage of troubles, but plenty of opportunities for creative and determined American leadership.”