Grant brings the world to SRJC 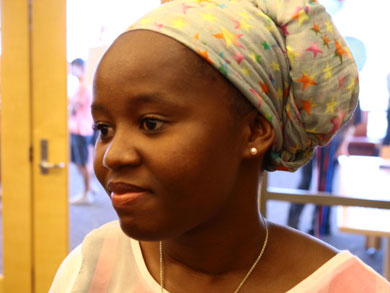 The U.S. Department of State’s Bureau of Educational and Cultural Affairs (ECA) led the initiative, which promotes intercultural exchange by sponsoring foreign students to study in American community colleges.

CCI aims to train students from developing nations to return to their home countries as global citizens with the knowledge and skills to build a better future for themselves and their respective countries, according to the ECA.

The 13 students come from Colombia, Ghana, India, Indonesia, Kenya, Pakistan, South Africa and Turkey. They share a desire to contribute to their countries by acquiring skills necessary for success.

CCI business student Kwena Eunice Motsoko, 24, said, “I would like to be my own boss and create job opportunities for the youth.”

Unlike most SRJC international students, CCI students work toward obtaining certificates in agriculture, automotive technology, business or child development instead of transferring to a four-year university.

“We had never gotten a grant like this before,” said Ganesan Srinivasan, co-writer of the grant proposal and dean of SRJC agriculture, natural resources and culinary arts department.

The benefits of CCI are both academic and cultural, Saragina said. The students will bring home a new perspective on the U.S. in addition to an education.

SRJC hopes to expand its international program. This year 127 international students are attending SRJC, an increase from 88 in 2013-2014, according to the student program’s office.

“I see these international students in the quad, and it changes the culture of the college, the complexion of the college, which is a good thing,” said SRJC President Dr. Frank Chong.

“We want you to be successful at SRJC because we are proud of you and we want you to represent yourself and your countries well,” Rudolph said.

Both Rudolph and Navarrete said it is an opportunity for international and local students to learn about each other’s cultures.