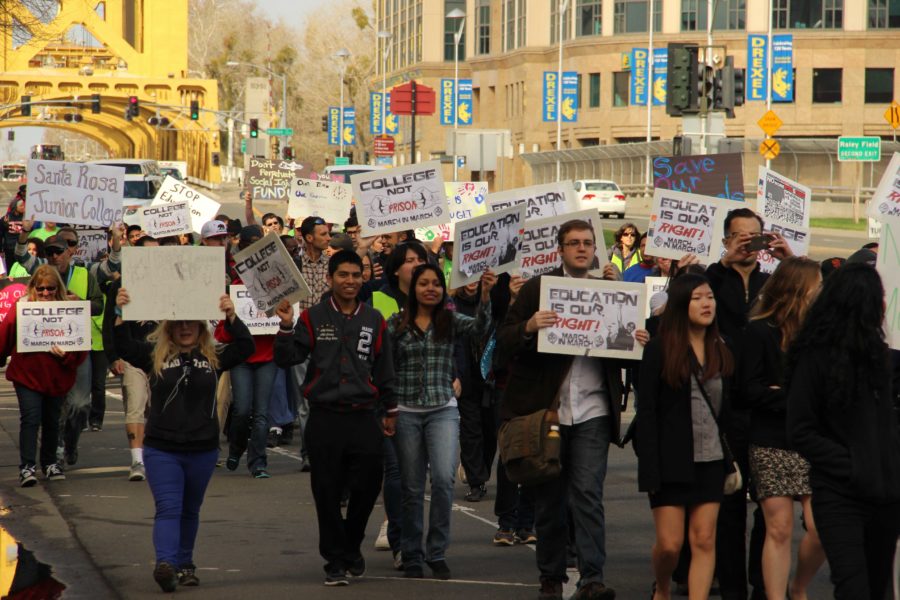 Nearly 3000 California students gathered in front of the Capitol building in Sacramento to protest student rights during March in March.

Approximately 50 Santa Rosa Junior College students, staff and faculty members joined the crowd March 4 to raise awareness that the incoming classes and funds Proposition 30 provided won’t be enough to offset the tremendous budget and class cuts suffered by California colleges across the state from the past several years.

March in March began as a sanctioned protest day to give students the opportunity to exercise their First Amendment right to assemble and collectively protest for whatever students believe is wrong or needed in today’s collegiate program. March in March serves as an appropriate place to voice concerns over budget and class cuts. California community colleges, California State University and University of California programs all suffered from the coagulation of school funding, and March in March became a centerpiece to yell these concerns to state legislators in the capitol.

SRJC President Dr. Frank Chong walked the first March in March while serving at City College of San Francisco. Since then, Chong has been an avid supporter of March in March. “The first one was the largest. There were some cuts and people were upset. But because this one wasn’t as large, that doesn’t make it any less important. They [community colleges] are such an important part of the state economy and SRJC has a huge impact on the well-being of our community,” he said.

In Sacramento, Chong met with various state legislators to discuss options to help bolster California college budgets. Chong and board of trustee member Don Edgar talked to state Assemblyman Marc Levine and state Senator Noreen Evans after the rally dispersed. “We took a look at governor Brown’s proposed 90-credit system and the future of online classes. They said they would take it under advisement,” Chong said.

Proposition 30, passed in the November 2012 election, slightly increased the California sales tax to 7.5 percent from 7.25 percent. The proposition also introduced higher tax rates in brackets for citizens earning more than $1 million in taxable revenue. Based on California Franchise Tax Board data for 2009, the additional income tax is imposed on the top 3 percent of California taxpayers. This infusion of tax revenue helps the state recover from the slurry of cuts forced upon them since the period from 2008-12, now being known as the “Great Recession.”

While Proposition 30 hopes to offset the balance between budget cuts and bonus funds, it’s not enough to prepare California universities for the rapid rise of incoming students. “Prop. 30 is like having a finger in the dyke,” said Dean of Arts and Humanities Tyra Benoit. “It’s going to slow down the bleeding, but it won’t stop it. We [SRJC] absolutely need to keep marching. I think it’s very important to understand that just because Proposition 30 passed, there are still a lot of issues we need to bring to our legislators.”

Student Advisor of Student Affairs Hilleary Izard organized SRJC’s participation for March in March. Izard helped register students in the weeks leading up to the protest and provided meals and transportation for everyone on both Santa Rosa and Petaluma campuses that day. Izard lead the SRJC protesters in chants throughout the day.

All students met outside Raley Field to a sanguine reception. According to California state law, all protest signs cannot have any length of wood attached to it, which presented a problem to every SRJC student. Directly after disembarking the bus, every student toiled hard to affix wooden sticks to each and every sign of protest. After much grumbling from the protesters, all potential firewood lay piled in the corner of the field, its hopes and dreams of holding aloft signs dashed in one fell swoop.

The protesters milled around the field for nearly an hour before the go-ahead sounded throughout the field.

Students marched one mile from the field to the Capitol with signs held high, chanting, “They say cut back, we say fight back!” among other pleas for saving class budgets and promoting the student presence in Sacramento. Police on foot, car and horseback patrolled the sides of the protest, herding wayward students back on the street. The procession to the capitol occurred without major incident.

At the Capitol, speakers from the California Community Colleges took the podium to speak about their experiences in college becoming more and more financially desperate until they felt the only course to reverse the budget cuts is through protest.

Because Proposition 30 notes a gradual shift from cutting to refunding California universities, colleges begin to consider March in March as a symbolic movement rather than an actual one. “This year it was much harder to get everyone riled up and make this march. Now that we have Proposition 30 that passed, and some new legislation from the Student Success Act, it’s going to change access, and us marching the street is more of a symbolic gesture,” Jones said.