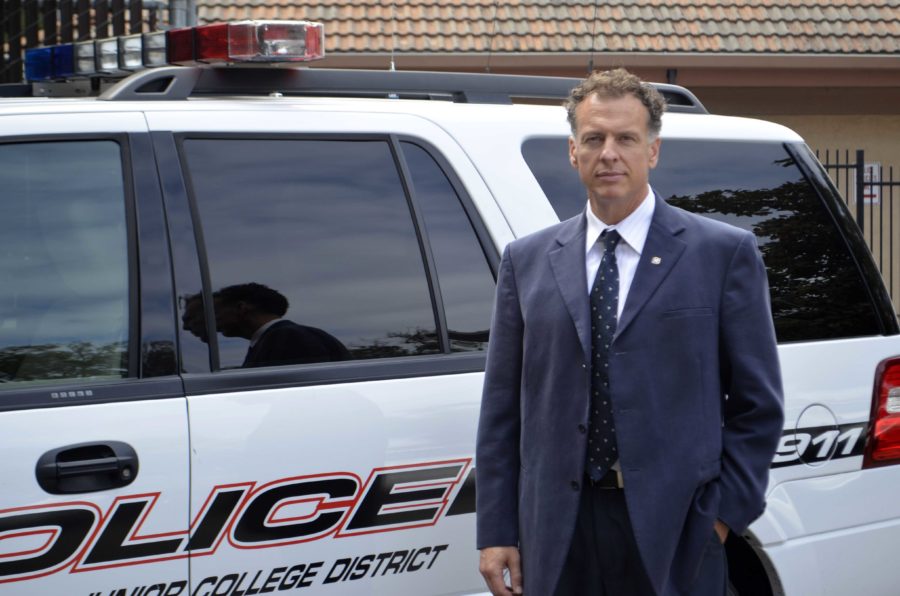 SRJC President Dr. Frank Chong recently selected Matthew McCaffrey as the new chief of police. McCaffrey’s appointment is pending approval by the SRJC Board of Trustees.

McCaffrey has 29 years of experience under his belt at the Sonoma County Sherriff’s Office, where he was the Captain of the field service and special services sections. He said he took the position at SRJC because he was coming to the end of his career with the Sheriff’s Office, and the position allows him to stay in Santa Rosa and work in a unique setting where people really care about the place they work. He is excited to dive into his new position.

“This is an amazing and really unique opportunity,” McCaffrey said. “I’m looking forward to working with the dedicated people at the junior college police department and getting to know JC staff and students.”

Former SRJC Police Chief Christopher Wilkinson resigned in February of 2011, after a hostile work environment complaint had been filed. Police sources said they felt that under Chief Wilkinson, they were operating in a “climate of fear.”

Chief McCaffrey said that before making changes to the department, one of his priorities would be getting feedback from staff about where they think the department has been and where it is going. He said changes will not be made without their feedback and buy in.

McCaffrey has three high school age daughters. He said he hopes they will go to SRJC but that ultimately he will support their choices.

“I’m delighted to announce that Matt McCaffrey agreed to join SRJC as the new police chief. I look forward to him leading one of the best public safety programs at
community colleges statewide,” Chong said.

McCaffrey studied criminal justice at SRJC in 1980. He earned advanced, supervisor and management certificates from the Commission on Peace Officers Standards and Training of California and graduated from the FBI National Academy in Quantico, Va. in 2008.

“He’s great,” SRJC District Police Office Joe Richards said. “He’s got 30 years of experience with the Sonoma County Sheriff’s office. He’s done just about everything you can do in law enforcement so everyone’s excited to have him aboard. I think he’s going to do a lot of good things for the police department and the JC community as a whole.”

Sgt. Rob Brownlee agreed. “I’m hopeful for the future of the department,” he said. “What I’m seeing is encouraging.”