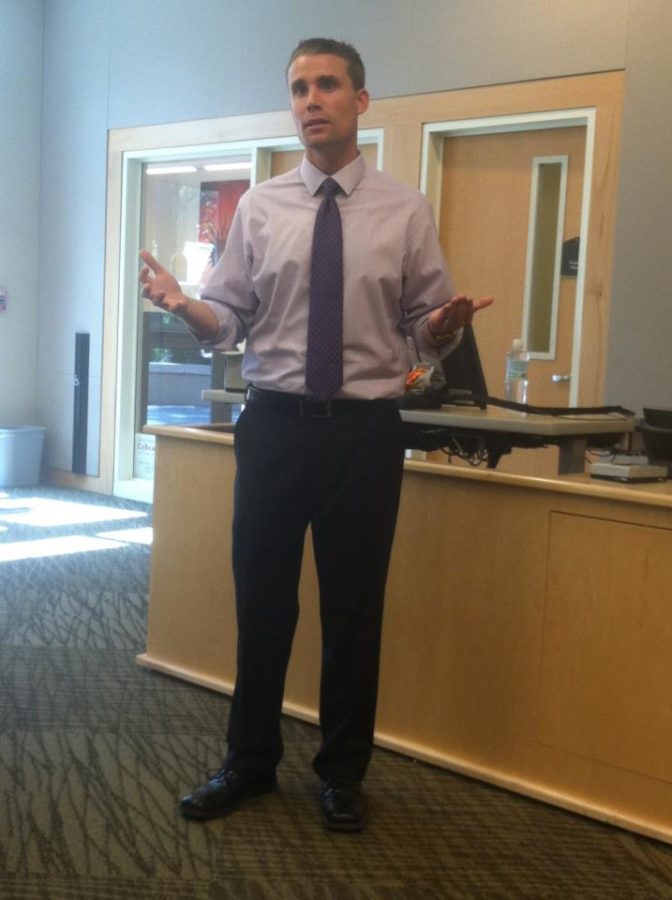 Supervisor Mike McGuire stopped by SRJC Sept. 26 to discuss his plans for the future of Sonoma County and express support for student participation and political leadership.

McGuire started the discussion by giving a short speech on his history, describing how his mother struggled to raise him by herself in Alexander Valley. He credited his grandmotherfor contributing to his upbringing and teaching him the importance of family values at a young age.

He began his discussion on politics by informing the audience about the lack of state and local funding for education. McGuire supports Prop. 30, which could save community colleges across California from having to slash their budgets again in 2013. He said that if Californians don’t pass the proposition, it “will show where our priorities aren’t.“

McGuire said he wasn’t sure how he would vote on Proposition 37, which would mandate labeling for all products sold in California containing genetically modified organisms.

The discussion quickly turned to county priorities as the supervisor reminded the audience about the current financial reality. The county has already cut 650 positions and $100 million off a $1.2 billion budget, and will need to continue making cuts.

The board is launching a plan to create new jobs. Under the plan, the board intends to expand local businesses by streamlining the county’s permit process and drawing in more companies.

There are plans to lengthen the runway at the Sonoma County Airport to lure in flights from United Airlines and allow for better access to the county for tourism.

Also, the SMART train is moving its main station to Airport Boulevard. The idea is to provide better accessibility to the airport for residents and tourists. The station is expected to create 100 living-wage jobs.

McGuire saved the best news for last, revealing that the cost of expanding highway 101 is $100 million less than anticipated. The extra money will be used to buildmore roads and overpasses.

Although McGuire supports legalizing and regulating marijuana, he said growers who act outside of law in this county are a problem. This is one reason why the board will expand the law enforcement budget in 2013.