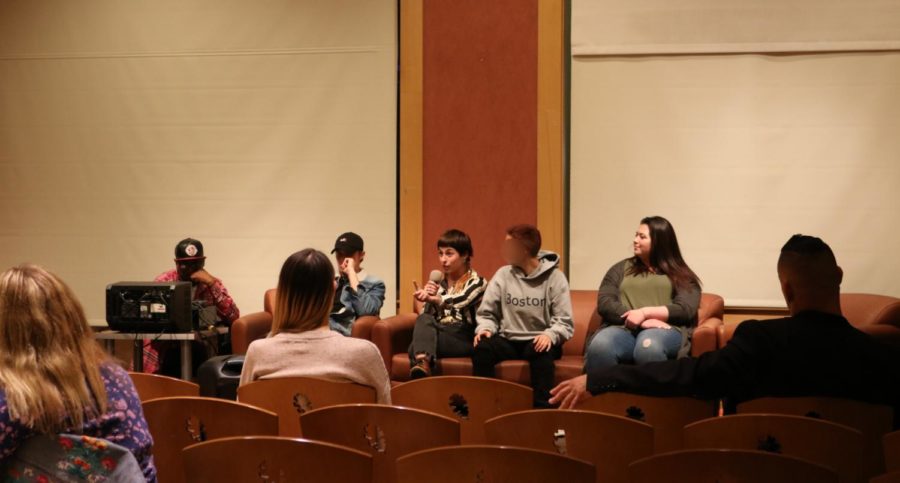 She recovered from drugs. She wanted to recover from being average. She is still recovering from herself. At 24, Nicolette Gottuso, a speaker at Santa Rosa Junior College’s Recovery Night, is nine years sober and was recently accepted into a graduate program at Pacifica Graduate Institute after spending her teen years toiling in drug addiction.

Gottuso’s journey into drug use began at 11 years old when she grew tired of being average, and how average wasn’t good enough. She joked about not even winning the award of “most improved” student. “If I do [drugs], I will be the best at being the worst.”

A panel of recovering addicts shared their journeys at the semesterly event on April 19 in the Bertolini Student Center. The Students for Recovery club, or S4R, hosted the event, which promotes ending the negative stigma surrounding recovery issues.

According to Gottuso, the route to recovery can mean healing from addiction to drugs, a person or yourself. Reaching for high goals, rather than being high, has led recovered addicts to gain a foothold in new achievements.

Speakers discussed the negative responses from the authorities regarding drug issues as a common hurdle in the path to recovery and commended SRJC’s non-discriminating and supportive culture towards those struggling with addictions or mental health issues.

“This is what community college is about. It’s about redemption,” SRJC President Dr. Frank Chong said.

At age 5, Burcina took care of her little sister when her mother was away struggling with addiction herself.

“I saw my mom do [drugs]. If I act her age, then I’m old enough to do it too,” said Burcina, 18, a speaker who started drug use in sixth grade. As a recovered addict of three months, she holds a 4.0 GPA and became senior class president.

Cox is a recovered addict who discovered music and spirituality as a different and healthier form of escape. “Spirituality gave a structure to my life,” Cox said.

The speakers began their drug use at age 11 or 12.

The youngest member of the panel, a 16-year-old high school student Gottuso sponsors in a 12 Step program, said, “Through being clean, I’ve learned how to function and be a good member of society.”

The speaker, whose name is being withheld due to her age and the sensitivity of the subject, is a recovered addict of two years and is on track to graduate a year early from high school.

She is one of eight siblings, but felt alone growing up. After losing a brother and struggling to connect with others, drugs numbed life’s troubles.

The speakers advocated for finding a support system to assist through the steps of recovery. The support system can be a sponsor, a group or a belief.

They advocated for stimulating activities such as meditation, academics or music.

Gottuso mentioned the common saying for recovery programs being, “The program saved our life, but the steps changed our life.”

The event provided resources like financial aid services and Second Chance Club to assist those who want pursue recovery from drug addiction at the JC. Surviving the Odds Project is a youth-empowering program based in Marin, and provided music at the event.

S4R meets at 1:30 p.m. every Thursday at Center for Student Leadership in Bertolini Hall.