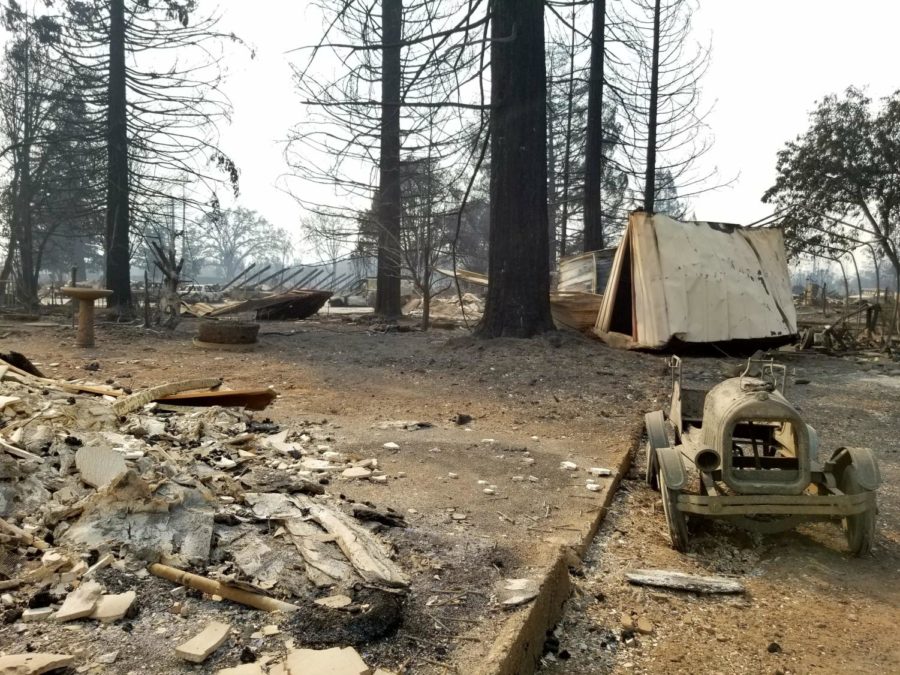 A fire-ravaged neighborhood in Santa Rosa.

Two months. For most of us, our lives remain the same over the course of two months. For victims of the North Bay Wildfires, their lives are forever changed from what they resembled two months ago, prior to an unprecedented blaze that engulfed much of Sonoma County. The flames held an entire population hostage, crippling them with high anxiety and even higher devastation.

The immediate danger of the crisis that was and is the North Bay Wildfires is finally extinguished. Now, two months later, with more than 5,000 homes lost and more than 245,000 acres of land burned, the majority of Sonoma County is held hostage by a different crisis: housing.

For three members of the Santa Rosa Junior College family, adjusting to their new lives, post-fire, may prove to be more difficult than surviving the fires themselves.

Former SRJC dean and adjunct instructor, Ty Benoit, 68, lost her 2,400-square-foot, three-bedroom, two-bathroom, Wikiup home in the wildfires. She and her husband, Bob, now live in a 600-square-foot, one-bedroom condo in Healdsburg.

“We don’t have anything in terms of furniture, but it’s lovely,” Benoit said. “I’ve become a real minimalist since the fire. I almost don’t want to have what I had before.”

Although Benoit is adjusting to the downsized version of her new life, she can’t help but be reminded of what her life once was. “The hardest part has been saying goodbye to the memories. Something happens every day that reminds me of our house and something in it,” she said.

The Benoits’ efforts to find a home were thwarted by the increased volume of competition and the skyrocketing prices.

“We thought we had a rental at least three times, but they all fell through,” Benoit said. “One was in escrow, but because the fires were not contained, her lender could not finish escrow, so it fell out of escrow. So, another person came in with cash and paid the seller more than $30,000 over the asking price.”

Benoit and her husband are in the process of rebuilding their home, grappling with what the insurance company is prepared to give and what the cost of rebuilding will be.

The cost to rebuild and how that process will play out exactly is something Benoit does not know. One thing she does know after surviving the fires, “As the buddhists say, ‘nothing is permanent. You lose everything at some point,’” she said.

On the night of the fires, Leonard and his friends were engaged in “Shadowrun,” a science-fiction, fantasy role-playing game at their home on Hopper Avenue.

“I’m going to start paying rent once I get a job, but I had to ask to stay with an old friend because I was going to be homeless again if I didn’t,” Leonard said.

Following the fires, Leonard was forced to drop all classes and now has no idea of how to pay the fees. SRJC established the Fire Relief Fund as a way to raise financial aid for students, staff and faculty members displaced by the fires. However, Leonard was unable to take advantage of this support.

“I heard about the Fire Relief Fund, but after the fire I was just too paralyzed to do anything,” he said. Returning to school is something Leonard looks forward too, but given the circumstances, it’s also something that remains questionable.

“I have to take a moment and get everything in order. I was diagnosed with PTSD before the fire and my symptoms have gotten much worse since,” Leonard said.

As of now, his efforts are focused on finding a job to pay the rent and stabilize a living situation to prevent from being homeless.

“I was told that FEMA couldn’t help me because I had no way to prove that I was in the fire since I wasn’t renting. So, I was denied federal assistance,” Leonard said. “There’s this whole notion that those who were homeless before the fires are trying to take resources from ‘real fire victims.’ It’s harmful to everyone because it creates an environment where all fire victims have to undergo interrogation to determine whether they were ‘real fire victims’ who are deserving of aid, by whatever standards.”

SRJC student and wildfire evacuee, Alex Simms, 21, believes that affected or not, everyone living in Sonoma County during the time of the fires is a victim.

“We’re all suffering from it in one way or another,” she said. “You don’t have to have lost your home to be affected.”

Simms and her family lost their Santa Rosa home in the Upper Brush Creek neighborhood. The Simms family was forced to trade in their 2,400-square-foot, three-bedroom, two-bathroom, ranch-style home for a 1,650-square-foot townhouse in Healdsburg. It took them a month to find the home.

“I come from a financially secure family; for the cost of rentals to be high–even for us–was crazy to think about,” Simms said.

The Simms family will stay in Santa Rosa and take on the challenge of rebuilding a home in a community looking to do the same. For many wildfire victims, rebuilding and starting over is a therapeutic source of hope in the face of such loss and despair.

Simms won’t have that opportunity, “Everybody tells me to look forward to rebuilding. I go off to college in six months, so I’m not going to be a part of the rebuilding process,” she said. “I understand people saying ‘hope for the better and rebuild,’ but not being here to help my family deal with it is really difficult.”

Simms is thankful for the amount of love and support from the SRJC community and the dance class she teaches in Novato. All but one of Simms’ instructors had “an overwhelming will to help.” Her dance class contributed clothing not only to her, but her entire family.

However, despite being two months removed from the tumultuous events of the wildfires, Simms is struggling mentally. “I’m suffering with PTSD and having a really hard time with memory. Maybe my brain doesn’t want to remember,” she said.

There is one thing Simms is sure never to forget from all of this. “You will never not know your neighbors’ names again. The empathy for one another has really changed the vibe in Sonoma County.”