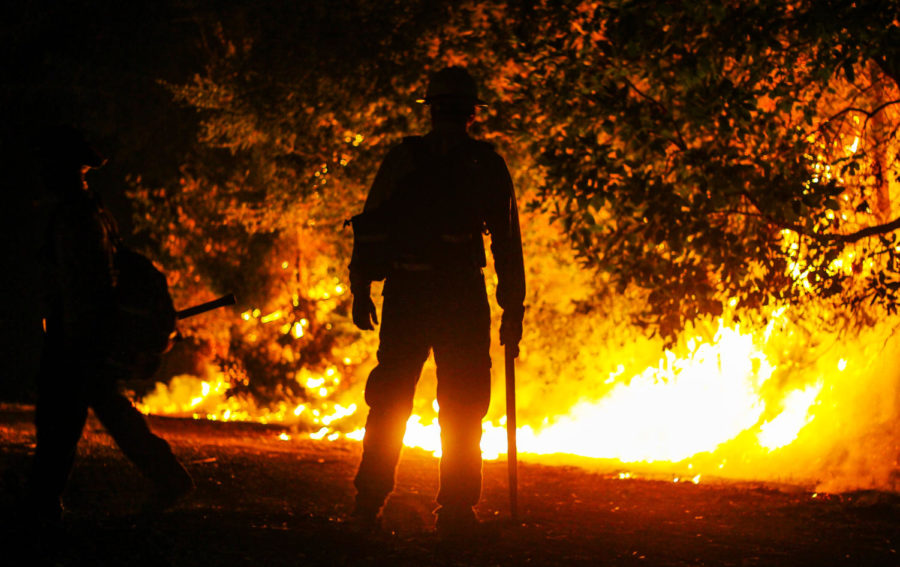 A firefighter watches a controlled burn outside the juvenile correctional facility near Kenwood.

As she drove home, she saw the fires of hell rage in the distance.

Meliza Bustos, a Santa Rosa Junior College nursing student who works at a health clinic, did not know how to process the whole scene. Heading home to Rohnert Park from San Francisco during the onset of the fires, she witnessed the hills near the Cotati exit glowing. A shocking red and orange glow illuminated the black midnight sky. She could barely go to sleep thinking about the distant fire in the mountains. It was when she came to work that she realized the impact of the fire was not so far away after all.

“It was very emotional to see patients coming in, and it was very sad,” Bustos said. “The vibe of the whole week was depressing.”

While sick patients and families flowed into the Petaluma Health Center with masks draped over the lower half of their faces, Bustos and her co-workers did not let the overwhelming empathy and sadness for the victims affect what they needed to do. They needed to help these patients.

Or maybe it was the overwhelming empathy for these families and patients that empowered Bustos and her co-workers to keep going and keep helping.

SRJC students like Bustos in surrounding communities not as affected by the fires provided support in many ways. Bustos helped by taking care of transferred patients from Santa Rosa clinics.

Isaiah Isaac, an SRJC sophomore who lives in Petaluma, used his free time to be a volunteer security guard at New Life Church-turned evacuation center in Novato.

When he first heard and saw the fire, he was baffled. A sudden empathy came over him. He was not going to sit around and do nothing.

The church’s closets and spare rooms became inundated with donated food, toiletries and clothing. While many evacuees arrived throughout the night, Isaac worked security during the night shift from 10 p.m. to 5 a.m. to maintain organization and prevent looting.

“I definitely needed the coffee,” Isaac said. “But it was worth it to help those affected. Relying on each other can open up hearts.”

SRJC student Sam Le opened the window of his Novato home because it was getting too hot on the night of Oct. 8. Little did he know that the warm temperatures were because of the fires that sprang up north. Smoke rushed in and invaded the inside of his house.

Concerned, Le called his sister, whose house in Sonoma was in the middle of two fires. Le wasn’t going to let his sister get out of there by herself. He jumped into his car and headed straight to Sonoma. With power outages throughout the north, the blazing rage of fires provided all the light he needed.

Driving north to Sonoma was the easier part of the trip. Driving back down south to Marin was chaotic.

“Everyone panicked,” Le bluntly said. The panic translated into a traffic nightmare on the back roads and 101 freeway. Long lines at gas stations made it more stressful. But the most important thing was that he helped his sister evacuate safely.

SRJC student Enrique Acosta had to be evacuated from northern Rohnert Park, yet he still stepped up for others.

Acosta runs his own clothing line website. He donated 40 percent of all profit from mid-October to mid-November to fire relief organizations. He also helped managed the clothing and shoe donations and distributed them to those in need at Fleet Feet in Santa Rosa.

“Everyone was very empowering and were motivating each other,” said Acosta. “The community really persevered through this.”

While the fire may not have directly affected these ordinary heroes, overwhelming empathy may have been a factor in doing more than sit and let time pass.

Acosta, a psychology major, said that empathy, “fueled people to help one another in need. It helped one another relate and pitch in on helping each other.”

As for Bustos, the Petaluma Health Clinic was packed and busy as can be.

She works in the referral department, which means she has to make and take constant phone calls to refer patients to other departments for their health needs. With many patients from Santa Rosa clinics and hospitals forced out and transferred to nearby health centers, the Petaluma Health Center phone lines had no break.

Some employees lost their homes and could not come into work, so Bustos and others had to take on multiple roles within the clinic. As of today, the clinic remains busy with the task of transferred patients’ medical records and authorizations.

However, Bustos understands why her job has been so stressful. Empathy for the victims of the fires puts everything into perspective.

“Everytime I feel stressed or overwhelmed, I just tell myself how much this doesn’t compare to the stress those families felt or are feeling as they lost their homes,” Bustos said.

So no matter how busy the clinic gets, she’ll continue to help others, because that’s what ordinary heroes do.