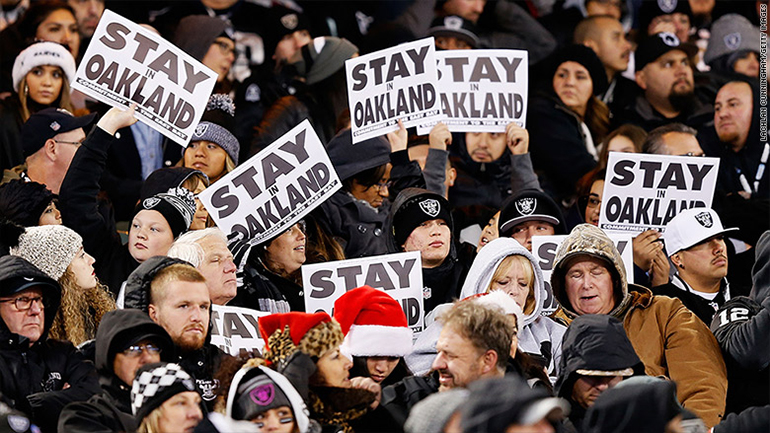 Although the Oakland Raiders are moving to Las Vegas local fans still have two years to cheer on the Super Bowl contenders.

As sports fans, we often forget that the teams we love and support are private entities and do not act as public enterprises. The owners of these teams are billionaire business owners, many of whom have gotten to where they are through shrewd business decisions. These powerful individuals have achieved economic success though decisions that are best for them, not for anyone else. Thus, when an opportunity arises that allows team ownership to increase the value of their franchise; they are going to do everything they can to take advantage.

In the Bay Area, Oakland Raiders fans are feeling the heartbreak of knowing their beloved team is about to leave Oakland for the second time. In an era in which public money for private projects has dried up in California, the state of Nevada pledged over $750 million dollars of taxpayer money to build a state-of-the-art football stadium in Las Vegas.

Naturally, Raiders owner Mark Davis jumped at the chance to increase the value of his investment through the use of public money. The Raiders will move into their new Las Vegas stadium prior to the 2019 season.

The Raiders will continue to play at the Oakland Coliseum for the next two seasons before moving, leaving many heartbroken fans unsure of what to do.

My advice to Raiders fans is to fill the Coliseum for each and every home game over the next two seasons, and to passionately support the team like they always have. On the field, the Raiders are a Super Bowl contender, a team filled with skilled young players on both sides of the ball.

quarterback in franchise history, having thrown for nearly 12,000 yards in just three seasons inthe NFL, while orchestrating comeback after comeback.

Raiders fan should savor the next two seasons with a team that is fully capable of hoistingthe Lombardi Trophy before leaving to Las Vegas.

Boycotting the team, and jumping off the bandwagon hurts no one but Raiders fans themselves, and these fans have waited a long time to root for a team good enough to be the last one standing.