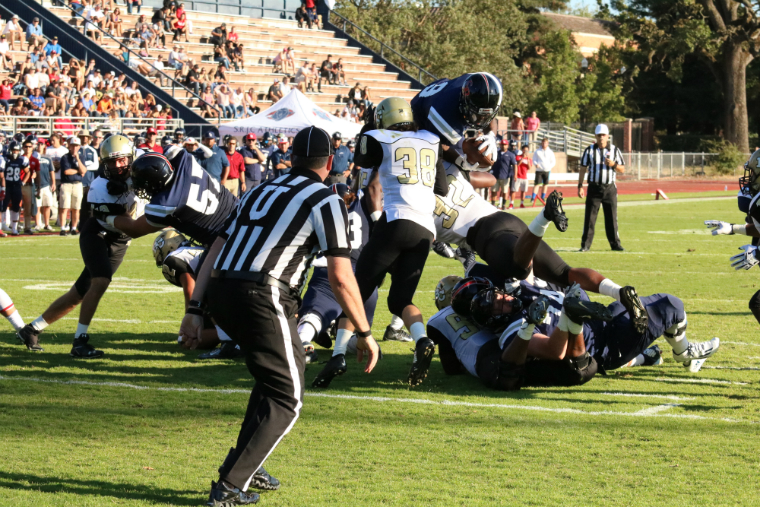 SRJC's Jay Ferguson leaps over the pile at the goal line to score a touchdown on a one yard run at Bailey Field.

After losing their first game of the season the Bear Cubs came back strong and beat Diablo Valley College 44-3 Oct. 29 at Bailey Field.

Coming off a tough loss to San Francisco City College, where six turnovers cost them the game, SRJC was looking to get an easy win over Diablo Valley.

“It’s just like having a bad taste in your mouth for seven days,” said head coach Lenny Wagner. “It feels really good to get the win.”

Poor field conditions played to SRJC’s advantage as the Bear Cubs thrived on the slippery field while the Diablo Valley players struggled to stay upright.

“Our guys like to play in the mud apparently,” Wagner said. “Both [Contra Costa College and Diablo Valley] looked terrible in the mud and we looked really good.”

SRJC played well on all sides of the ball and most importantly didn’t turn the ball over once.

“We had what we consider a complete game,” said sophomore running back Ja’Narrick James. “We put up points, we shut them down and we limited the turnovers. I don’t think we had any actually.”

The Bear Cubs’ defense once again shut down their opponent, allowing 192 yards of offense including only seven yards rushing on 28 attempts. The three points SRJC allowed came from a Diablo Valley offensive series field goal where the Bear Cubs committed a personal foul that kept the drive alive.

“The team played great,” said sophomore defensive back Keilan Benjamin. “We gotta cut down in penalties though, we had like two personal fouls. So we gotta limit that, that’s not the type of team we are.”

Benjamin matched up against one of the best receivers in the state, Marquese Surrell, but held him to zero catches.

“They have the No. 2 receiver in the state but they didn’t throw the ball once at me,” Benjamin said.

SRJC’s punting from Dalton Mullins, and punt returns from James gave the team great field position all night. So, although the Bear Cubs put up a lot of points they did not need a ton of production from the offense, gaining only 246 through the air and 117 on the ground, including 54 yards on 10 carries from James.

Because SRJC beat Diablo Valley College and College of San Mateo beat San Francisco on Saturday, the Bear Cubs next game, which is against San Mateo, will be the deciding game for the Bay 6 Conference Championship.

“We’re going to go get a Bay 6 Championship and bring it back to Santa Rosa,” James said.

The Bear Cubs will face College of San Mateo in the Bay 6 Conference Championship Nov. 5 at Bailey Field.