Elephant wars: Dissenting ranks threaten to dismantle the GOP in the 2016 presidential election 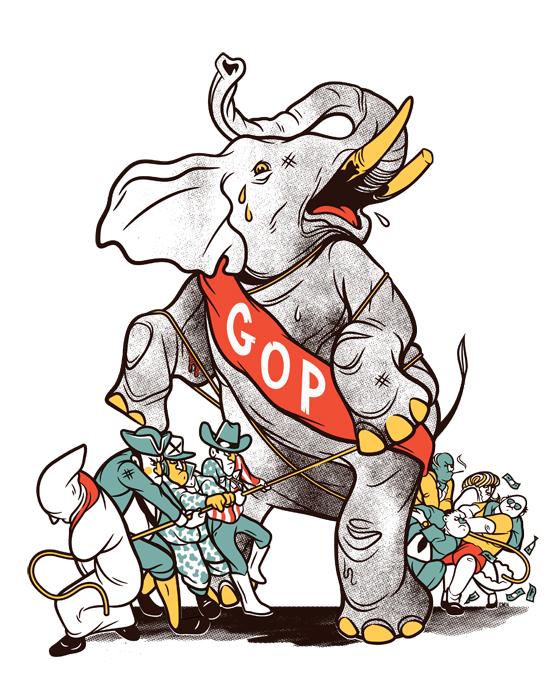 Rival factions of the GOP fight for the future, aiming to control the party.

The 2016 Republican National Convention is still more than a year away, but the primary campaign is already in motion with a myriad of camps vying for the coveted presidential nomination. Players across the spectrum of the fragmented party seek to define the GOP and reclaim the White House.

Student loan policy and college affordability are key platforms for 2016. These issues personally affect college students throughout the country and will strongly influence the youth vote. The GOP’s voice that prevails from the primaries, stance on these issues will be a consequential factor in youth voting

The GOP is confronting an identity crisis threatening the party’s adhesiveness. The rank and file of the Republican establishment has given way to dissent and ideological contention reigns.

The main schism within the GOP rests between the center-right fiscal conservatives hailing from the establishment tradition of tax cuts and business friendly policies, and the grass-roots Tea Party/Libertarian sympathizers, yearning for more extreme changes in Washington like extensive government reduction and drastic recline of private sector regulations.

Reeling from two consecutive presidential defeats, the GOP licked its wounds and took both chambers of Congress in 2014. They hope their momentum will continue victory in 2016.

While the GOP has the advantage of opposing the incumbent party, since the White House historically ping-pongs between parties, they suffer a potentially disastrous leadership and unity problem.

The Tea Party/Libertarian candidates are less viable for the popular vote because they are fringe politicians. They represent far right values such as stripping citizens of federal safety nets and allowing unfettered business autonomy, which a centralist voting populous tends to reject.

Prominent Tea Party candidates like Texas Senator Ted Cruz, who advocate securing the Mexican border with a gargantuan fence and introducing an increasingly non-progressive tax code, don’t appeal to a majority of the American people.

The Tea Party does however sway many conservative voters frustrated with the political establishment. The Tea Party community sees government as overgrown, corrupt and the source of America’s problems. They perceive their own party as too close to Wall Street and too accommodating of big government. By this attraction they gained significant Congressional shares, obtaining seats in both houses.

Of the current front-runners, Governor Chris Christie of New Jersey and former Governor Jeb Bush of Florida are the most promising. With Romney retracting his bid, they are the competing heirs apparent of the GOP establishment. Scott Walker, Wisconsin’s sitting governor, is another establishment candidate

Cultural conservatives, identifying with traditional values and evangelical ideals, such as opposing gay marriage and forwarding a crime and punishment justice system, have two front-running tribunes in the race; former governor of Arkansas and Fox News contributor Mike Huckabee, and former governor of Texas Rick Perry. Both have relative popularity in their respective turfs, but they lack the mass accessibility and resources of Bush or Christie.

Helming the Libertarian sect is Rand Paul, inheriting his leadership from his father Ron, who ran in 2012. Paul, like his father, is a peculiar breed of conservative. He champions the argument for small government and state rights, yet supports an isolationist foreign policy and ending the drug war. Paul attracts voters from both sides of the aisle but may be too eccentric and anti-establishment for his party’s nomination.

Other candidates like Louisiana Gov. Bobby Jindal and Florida Senator Marco Rubio may also have a claim to the nomination.

Realistically, a winning GOP candidate has to mobilize the conservative base, pander to the party’s big donors and convince the American people they are more centralist and pro-America than their Democratic opponent.

None of the GOP candidates want to repeat the errors of John McCain and Mitt Romney, neither of which bridged the gender gap or brought enough minorities into the fold. Obama beat McCain with women 56 to 43 percent and Romney 55 to 44 percent, according to the Roper Center. Minorities and young people also overwhelmingly favored Obama. The 2016 GOP nominee will have to be marginally more accessible and attentive to these quintessential voting groups.

Conservatives of all colors will compete in a bloody contest of cajolery, finesse and appeasement to conform the Executive Branch’s agenda to their political dogma. In-house ideological debate is healthy, but in the case of a Presidential race, warring factions enervate party strength. The GOP will have to unify behind a single standard and eventually a single candidate. If they don’t their splintering ranks will empower the Democratic nominee.