The Oak Leaf • May 16, 2019 • https://www.theoakleafnews.com/magazine/2019/05/16/step-into-the-daylight-and-let-it-go-title-ix-sheds-light-on-the-realities-for-sexual-assault-survivors/

Step into the daylight and let it go: Title IX sheds light on the realities for sexual assault survivors 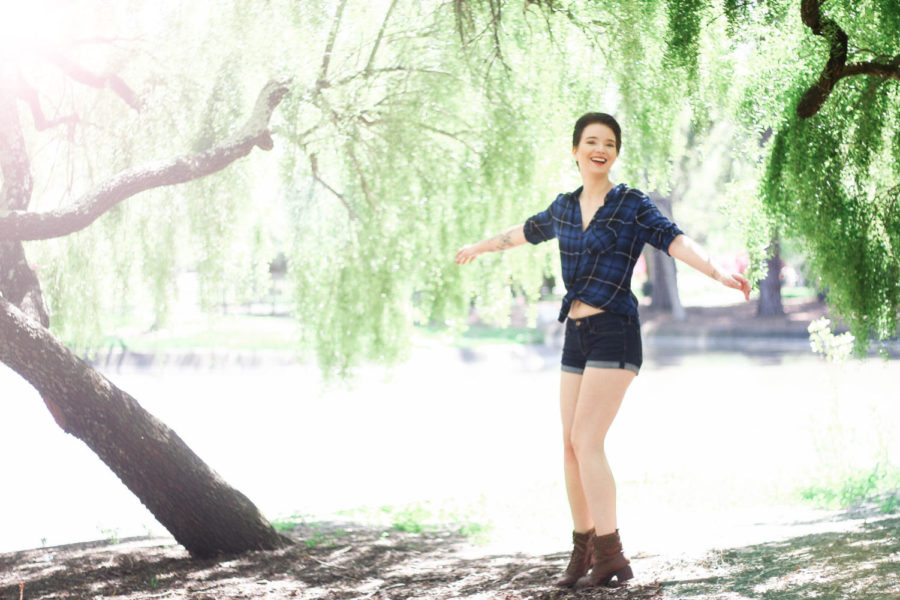 Silence blankets a packed Spreckels Performing Arts Center in Rohnert Park. Backstage, a nervous Rhiannon Jones prepares to recite her platform statement for the Miss Sonoma County competition. She stands, closes her eyes and collects her thoughts. The click-clack of her heels echoes as she approaches the podium.

A panel of judges awaits, pens in hand, eyes glued to their scorecards. When they look up, they make eye contact with Jones. She composes herself, pauses, then takes a deep breath.

When she speaks, her words are atypical of a beauty pageant contestant’s platform. But she says them anyway.

What Jones experienced isn’t uncommon for college students her age. She is one of thousands of people sexually assaulted annually on college campuses in the U.S.

In 1990, Congress passed the Clery Act, federal legislation that provides transparency for campus crime policy and statistics. The Clery Act outlines multiple categories of crime on college campuses, including sexual assault. While campus crime logs are published monthly, the Clery Act also requires colleges to compile a three-year summary of all crimes on campuses, providing an annual analysis of crimes.

No definitive statistics collected nationally illustrate the number of sexual assaults annually, but organizations like the Rape, Abuse and Incest National Network (RAINN) state that college students are two times more likely to be sexually assaulted than young adults of the same age who don’t attend a university.

Additionally, while there is no definitive data repository, the FBI’s Uniform Crime Reporting system allows precincts to self-report data; but not every county, state or city reports its information.

Jones had multiple alternatives when choosing to report her assault.

“I originally wasn’t going to report it at all because there wasn’t enough evidence for my case,” she says. “But I didn’t even know Title IX was an option since it occurred off campus.”

According to The American Association of University Women (AAUW), Title IX is a comprehensive federal civil rights law that prohibits sex discrimination in education. Both sexual harassment and sexual violence are forms of sex discrimination covered under Title IX.

The law protects students from sexual harassment and violence that occurs in the course of a school’s education programs and activities. Once a school knows of or reasonably should have known about sexual harassment or sexual assault on campus, Title IX requires the school to promptly investigate the complaint and take steps to protect its students.

Jones ultimately pursued a criminal case, but she is in the minority of victims. The American Civil Liberties Union (ACLU) states 95% of college sexual assaults go unreported, with the top three reasons being fear of retaliation, belief there wasn’t enough proof or simply not knowing how to report.

SRJC District Police Lt. Robert Brownlee has an opinion on why reports have increased on Sonoma County campuses.

“With Title IX, the #MeToo movement and help from local law enforcement, I think what we’re seeing is it’s easier for survivors to report. There are more resources and an easier and better way to interact with law enforcement [with Title IX],” Brownlee says.

“I think we’re not necessarily seeing an increase in sexual assaults; I think they’ve always been out there on a fairly steady level, but…people are reporting them more and shining a light on the issue.”

After Title IX was refined during President Barack Obama’s first term, SRJC created a position to oversee Title IX reporting and processing on campus. Stephanie Jarrett, manager of training and compliance at SRJC, oversees the decisions made in Title IX reports. Jarrett’s position was created to improve SRJC’s approach to sexual misconduct and inform students on campus.

Because of Jarrett’s work, students and faculty are required to take online training on sexual misconduct.

“We’re really trying to promote awareness  with the social climate now. There is so much more of an empowerment, and that’s why we’re receiving more reports,” she says.

Like Brownlee, Jarrett also thinks the increase of Title IX reports stems from the #MeToo movement.

“People now feel empowered that others will believe them if they report. When I see an increase in reports, I actually think that’s a positive sign, that people are now saying ‘Hey, this is not OK and we need this to stop.’ I think with more reports we can really address the larger issue,” Jarrett says.

“Survivors sometimes come forward after presentations because I explain what constitutes sexual assault or misconduct,” Jarrett says. “They have these ‘aha’ moments because I give them language to identify the situation.”

Jones says the #MeToo movement inspired her to come forward.

“It originally helped me come to terms with a previous assault,” she says. “Just seeing that I wasn’t alone and admitting to myself and others that ‘yeah, this happened to me, too’ was very relieving.”

But before she felt empowered, Jones was devastated. The night of her assault is seared into her memory.

“Even though I was drunk, I remember everything,” Jones says.

It was Dec. 23. She had driven to a coworker’s house to spend time together after a shift. They stayed up late drinking and talking, and decided to have sex; both were drunk. As it progressed, Jones became uncomfortable and said their safe word, “camp.”

She repeated the safe word over and over, but he wasn’t listening.

Later in the night, while her perpetrator slept, an unnerved Jones quickly collected herself and left his apartment complex.

She sprinted to her car, fearful her perpetrator was following her, but too afraid to check.

She called a friend to pick her up. While she waited, she lay in the back of her car swaddled in a blanket, replaying the assault but desperately trying to forget.

“I wish I had blacked out because then I wouldn’t have to remember everything,” Jones says. “Even though it would suck not knowing, at least it wouldn’t be so vivid for me.”

The next day, on Christmas Eve, she took a hot shower before calling Verity, a sexual assault and rape crisis center in Santa Rosa. Then she went to work and found herself sobbing uncontrollably. She decided to tell her manager.

Her manager dismissed her so she could go to the hospital, where staff administered a medical rape kit, various injections for sexually transmitted infections (STI) and a Plan B pill.

Later that day, Jones reported the assault to Rohnert Park police. She did not report through Title IX, unlike an increasing number of college students.

Although Title IX is an efficient process for some survivors, not all walk away satisfied with their experience. Amoura Deering, an SRJC alumna, felt the process was too invasive.

At one point, her Title IX processor wanted to examine Deering’s phone to acquire more proof for her case. Deering felt the request was an invasion of privacy, one that was as traumatic as the assault.

However, her perspective of the Title IX process changed when she transferred to University of Nevada, Reno. Deering was at a local bar when two men attempted to kidnap and sexually assault her. When she reported through Title IX, she was met with compassion and comfort, something she believes was lacking at SRJC.

“Whenever there’s another incident on campus, they always call me to make sure I’m safe, and I’m OK,” Deering says.

Both Jones and Deering felt the huge range of emotions that follow reporting an assault.

Feelings of doubt, insecurity and, on occasion, fear plagued Jones through her reporting process. At one point she contemplated dropping out of the Miss Sonoma County competition, but realized in the wake of her trauma, she wanted to win more than anything.

“It’s a hard thing to face. Dr. [Christine Blasey] Ford had her name dragged through the mud, and I was fearful of the same thing happening to me,” Jones recalled of the Brett Kavanaugh hearing. “I’ve learned though that there is always someone who favors your perpetrator, but it’s inspiring to me to have the confidence I do in the face of it all.”

As Jones finished her platform statement, she walks out of the judges’ room nervous, but more confident than before. Her heart racing, she joins the other contestants on stage. As she stood side by side with the other girls, hand in hand, all she hears is the thud of her heart against her chest.

“Please be me,” she thought to herself, “Please let it be me.”

The audience is silent. Jones holds her breath, waiting for the judges to announce their choice. “Your 2019 Miss Sonoma County is Rhiannon Jones.”

She exhales and hears the roar of the crowd before her.

Yes, this is a proud moment for her, but it isn’t the crown that satisfies her most.

Instead it’s the realization she can accomplish anything in the face of adversity.