In the dugout with Amy 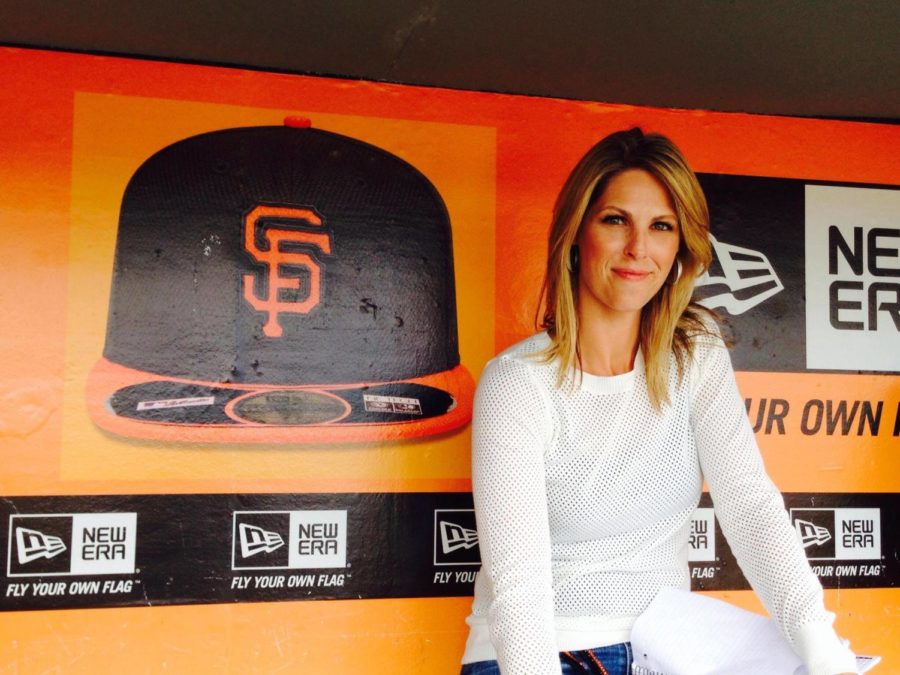 Amy Gutierrez, the San Francisco Giants sideline reporter and a native of Sonoma County, always knew she wanted to be on television, but never thought she would become a sports journalist.

“As a kid, my mom said I would always pretend to be a news anchor,” the 45-year-old Gutierrez said.

A Casa Grande High School alumna, Gutierrez grew up in Petaluma and vividly recalls how she first got into TV.

She had to create a volleyball tape for her high school and got taken to the scorer’s tables. In that moment she realized TV was something she loved to do.

After high school, Gutierrez attended the University of California, Davis and majored in communications with a focus on TV. She wanted to become a hard news journalist.

“I definitely didn’t think about sports at all. I thought I was going to be a news reporter. I envisioned myself on the 6 o‘clock news, out in the flood reporting,” she said.

It wasn’t easy for Gutierrez to land an on-air job after college. She carved her path by writing and becoming a producer, even working in sales at a television station in Los Angeles. Gutierrez said her first gig was as a part-time producer for Santa Rosa Channel 50 KFTY.

“I think I got paid $8 an hour and had to be there at three in the morning until 8 a.m. I had to swing, like, three jobs because I couldn’t afford my rent with that job, but I loved it. I loved the job, and I was writing,” she said.

After multiple promotions, she came to work for San Francisco KRON-TV, where she produced a consumer report show but was later laid off.

“They always say you really haven’t worked in television until you’ve lost a job,” Gutierrez said.

This was the unexpected catalyst for her future career as a sports journalist. She landed a job with Fox Sports Los Angeles that lasted years.

Then she moved home to the Bay Area, began freelancing and published a feature story about the San Jose Giants. During this time she also gave birth to her first child, but in spite of this, the powers that be at Fox Sports Bay Area, known as NBC Bay Area today, believed she had what it took and put her on air.

“I just put my head down and tried to navigate uncharted waters, learning the job. It was a new job. You kind of just figure it out and I had the help of supportive co-workers, colleagues and a family,” she said.

Gutierrez has covered multiple World Series games, traveled with the team through the 2014 run and even followed players, including Javier Lopez and Hunter Pence through multiple states during the trade deadline. In the beginning, traveling with the Giants was a bit of a challenge.

“It was that time where they didn’t have places where you could breastfeed, but now they have added so many new amenities for women. Women have really reinforced the work environment because you do have to work through these things.”

Being a woman in sports media, Gutierrez knows the stereotypes many women face going into a male-dominated industry.

“Women are working together to break the stereotype of ageism and that once you hit a certain age, you can’t do something anymore. Also, everything is based on what you look like, and not what you know,” Gutierrez said.

Gutierrez has seen and experienced how women bring a different audience to sports. When she first started working with the A’s in 2006, only one or two women, including herself, were in the clubhouse.

Now there are around seven or eight female reporters, each with different backgrounds and reporting for different outlets, who work alongside her in the Giants clubhouse.

Gutierrez lives in Petaluma with her two children and her husband. She’s also the author of three books: “Smarty Marty’s Got Game” (2013), “Smarty Marty’s Official Gameday Scorebook” (2015) and “Smarty Marty Steps Up Her Game (2017).” You can catch her on the diamond, reporting for the San Francisco Giants.