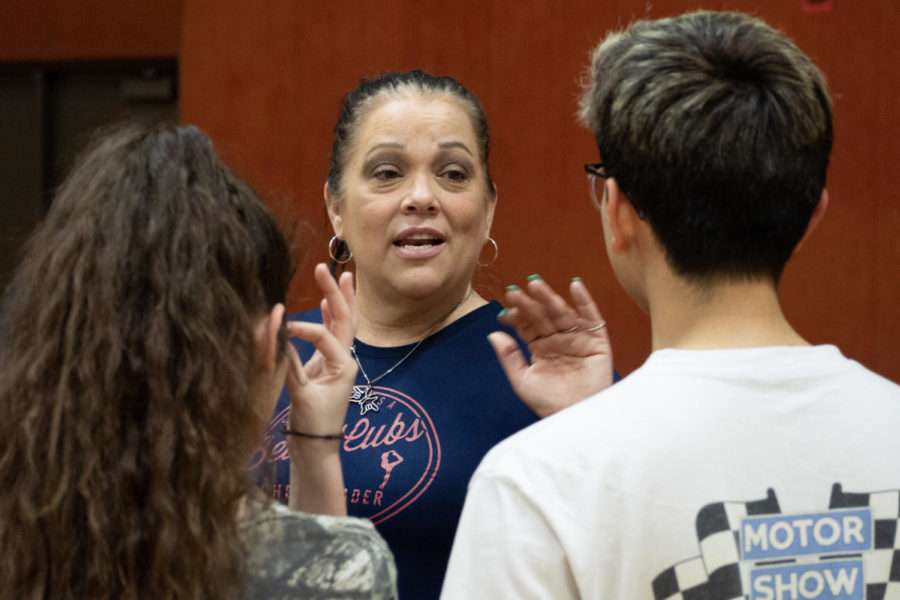 Elder is the new Bear Cubs cheer coach. She has 19 years’ coaching experience, from Pop Warner to high school teams around Sonoma County, including Analy and Casa Grande High Schools. Now she has brought her expertise to SRJC.

Cheerleading is one of the most dangerous sports, yet it continues to grow. In the U.S., more than 3.3 million cheerleaders participate in the sport.

Elder is forging a new path to success for the cheer team.

She is majoring in deaf studies and is student government’s Vice President of Clubs. When previous assistant coach Hannah Harries mentioned the cheer team had a position open for a head coach, Elder decided to add her name to the running.

Over the past four years, the SRJC cheer team has struggled with the turnover of coaches.

Elder doesn’t know why previous coaches left, but said she wants to believe it was because they came from dance backgrounds and weren’t familiar with cheerleading.

“Dance and cheer are two different sports,” Elder said. “Having someone that is dance-based and really doesn’t know cheer, is almost setting them up to fail. Just like I don’t know dance terminology; they don’t know cheer terminology.”

As with other sports, the relationship between athletes and coaches is very important, and trust plays a big role.

“If you come and try to talk ‘cheer talk’ and you’re making mistakes, cheerleaders are going to look at you and be like ‘Nope, I can’t trust you,’ especially with stunting because it’s very dangerous,” she said. “Trust is very important between a cheerleader and a coach,” Elder said.

Chazz Madereros joined the SRJC cheer team in fall 2014 and cheered for three seasons. The 23-year-old music major became co-captain during the Spring 2015 season and maintained the position through 2017.

“I think the SRJC cheer team has gone through so many coaches due to the lack of level-appropriate skills, as well as knowledge of how to manage a team, by the coaches who are being hired,” Madereros said.

He also senses a huge lack of support from the SRJC administration.

“Whether it be something as ‘complicated’ as recognizing cheer on an athletic level and making it a sport that is included among the other athletes on campus, or simpler things like the team being given a space to practice,” Madereros said.

For a new coach, integrating with and leading athletes you’ve never worked with can be difficult.

“Attitude is a big thing. It’s not just the coach’s fault; it takes two. There are young women on the team. A lot of them are right out of high school; they have attitudes,” Elder said.

Madereros said there are always some athletes on every team who cause drama.

“That’s why they’re there — just for the title of being a cheerleader and not the rigid beauty of the sport itself. That can cause a team to become unmanageable internally and then fall apart all together,” Madereros said.

“First thing I did was sit down and lay out some rules,” she said. “I run a very tight ship. I don’t play games, but I’m respectful.”

She might be tough, but Elder wants to promote a positive and welcoming environment for everyone.

Cheerleader Lili Levy knew it was a good sign when Elder announced their brand new speaker system will be arriving soon.

In addition to unclear expectations, fees can be a barrier to successful participation, too.

Elder plans to host fundraising events throughout the semester to help athletes afford their $65 monthly dues and other equipment needs.

She plans to bring her fundraising experience with high school cheer to the SRJC team by printing sponsorship shirts for athletes to sell, as well as organizing dine-and-donate events. Her goal is for each athlete to raise enough money to cover all fees.

“Their account has always been low or at zero. I want money to be in the account so when we need mats, we get mats, and when we need signs, we get signs,” she said.

Because cheer is considered a club sport, SRJC does not pay members’ expenses. Joining the team costs a new female athlete $1,720 and a male athlete $1,573, which covers costs for his or her uniform, monthly dues and cheer camp. A returning female cheerleader pays $1,373 and a male pays $1,343, reduced fees because they already own the uniform.

Taking the team to cheer camp off-site isn’t the only opportunity Elder plans to offer her athletes. She also plans to host “home camps” to promote camaraderie within the team.

“It’s very important for the team to do outdoor side activities that aren’t related to cheer, like go to the movies, [or] go camping,” she said.

One of Elder’s main goals is to attend competitions. The last time SRJC competed was in 1998 at the United Spirit Association in Anaheim. “Competition is one of the things athletes always look forward to,” she said.

She hopes to fill SRJC’s two teams this season. The “sideline” team will support SRJC athletics with 25 cheerleaders; the competitive team will offer spots for 15 to 25 athletes who will compete solely against other collegiate cheer programs.

“Dori is amazing,” Madereros said. “I believe she has the will and means to make SRJC cheerleading the collegiate cheer team it’s been longing to be. Her skills and agility as a coach are great, and it’s fantastic to see the JC administration recognizing that.”

SRJC hosted tryouts April 14, and after a five-week clinic, the remaining 29 athletes became the new SRJC cheerleading team. The new team is struggling to find a permanent location to practice.

“Because we are a club sport team, we are last priority to be in a gym,” Elder said.

Regardless, Elder and the athletes are excited for the program to progress.

“I can’t wait to see what the team has in store for the college next season,” Madereros said.