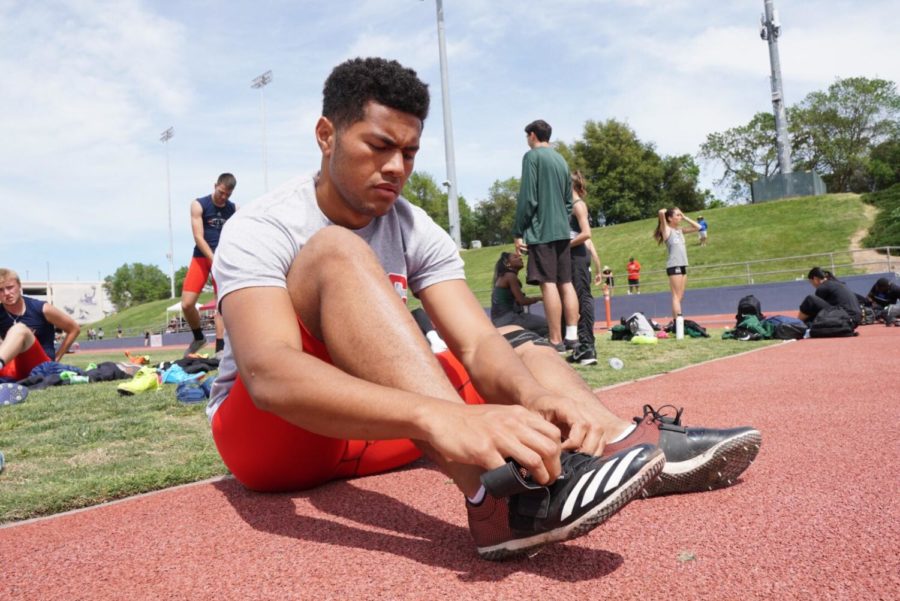 If you raise the bar, Santa Rosa Junior College freshman Waisea Jikoiono will jump over it.

The 6-foot-1 athlete is shattering the mold of your typical first-year high jumper by setting this season’s highest mark in his very first collegiate meet.

Jikoiono is driven by his faith, his love for the sport and his determination.

He set his previous personal record of 6 feet, 5 inches while jumping for Montgomery High School, but exceeded that mark for SRJC at the Jack Albiani Invitational in Modesto March 1.

Jikoiono reached this new height after being frustrated with his previous personal record and wanted to challenge himself. So the freshman set the bar 2 inches higher to 6-foot-7.5 inch, unaware this height would put him at the top of the state leaderboard.

“I was psyched!” Jikoiono said about setting this new personal best. “I had so much adrenaline, the entire high jump team was watching in the high jump pit, and they were going crazy. I didn’t know it was going to be the highest jump in the state and I didn’t know I would qualify. I was just jumping.”

Head coach David Wellman was confident in Jikoiono’s jumping ability and his willingness to compete in college.

“I half expected [him to set a new personal record] because he was jumping well in practice, but it’s always surprising when someone jumps that well that early. I was really surprised how well he competed and how focused he was,” Wellman said.

Jikoiono isn’t looking for notoriety or attention but enjoys competing to the best of his ability. He draws inspiration from multiple sources.

Former California governor, Arnold Schwarzenegger is one person who inspires him. “I remember watching a video by [him], and he was talking about his six steps to success. One of them was don’t be afraid to fail,” Jikoiono said.

“No matter how high you get, at some point you’re going to have to fail because it’s a competition between you and the bar.”

He’s also inspired by a second famous Californian, Golden State Warrior Steph Curry, and his connection between his craft and his faith. And although Jikoiono’s faith does not define him, it helps him strive to be better.

“I align myself with Stephen Curry in terms of my faith. That’s where I find my source of strength in every aspect,” Jikoiono said.

The third person who inspires Jikoiono is his mother, a national champion high jumper in their native Fiji and the reason he took up high jump in the first place.

“She would always tell me and my brothers to try high jump. None of them tried, but I remember back in eighth grade in Fiji, my coach was making everyone try something. It came down to high jump, so I tried it. It ended up working out,” Jikoiono said.

When Jikoiono is preparing for a jump, he blocks out everything. He tries to clear his head and relieve any anxiety or pressure.

“I look at the sky, not thinking about what I’m about to do,” Jikoiono said. “I find that when I think it too much I don’t perform as well, so I try to relax, breathing in and out.”

This routine that helped him hit the top mark in the state.

“Once you clear a height and you land on the mat, seeing that you’ve cleared the height, it’s such an amazing feeling,” Jikoiono said. “Most high jumpers would tell you it’s one of the best feelings in the world. It’s like hitting that game-winning shot in basketball.”

Jikoiono’s love for the event sparks a light in him; when Jikoiono is jumping, it’s as if nothing else matters.

But that’s not the case when he’s in the classroom. One of his highest priorities is to further himself academically, and high jump is an avenue toward his goal.

Jikoiono’s plans to transfer to a four-year college after his stint at SRJC. While he isn’t looking at any specific schools now, he’s willing to attend any university that allows him to both compete in track and earn his bachelor’s degree in psychology.

Until then, Jikoiono is working toward an associate degree in communications and preparing for meets that are only getting more and more competitive.

According to Coach Wellman, Jikoiono seems up for the challenge of competing against the best jumpers in the state.

“He’s a levelheaded and humble person before we even get to athlete. He’s very gracious, smart, nice and compassionate,” Wellman said.

“And when it comes to competition, he’s got another level of focus and drive. When someone clears a height before him, he gets even more excited.”

This is a good foundation for an athlete currently being scouted by his home country. The Fiji national team has already reached out to Jikoiono to join its summer program.

In the meantime, the Bear Cubs track and field team will continue to practice off campus due to renovations to Bailey Field.

But the lack of a home track has not stopped the freshman from shattering expectations.

“High jump is really all about you jumping against yourself,” Jikoiono said. “Really trying to push past your limit is one of the best things you can experience.”