A second chance at life 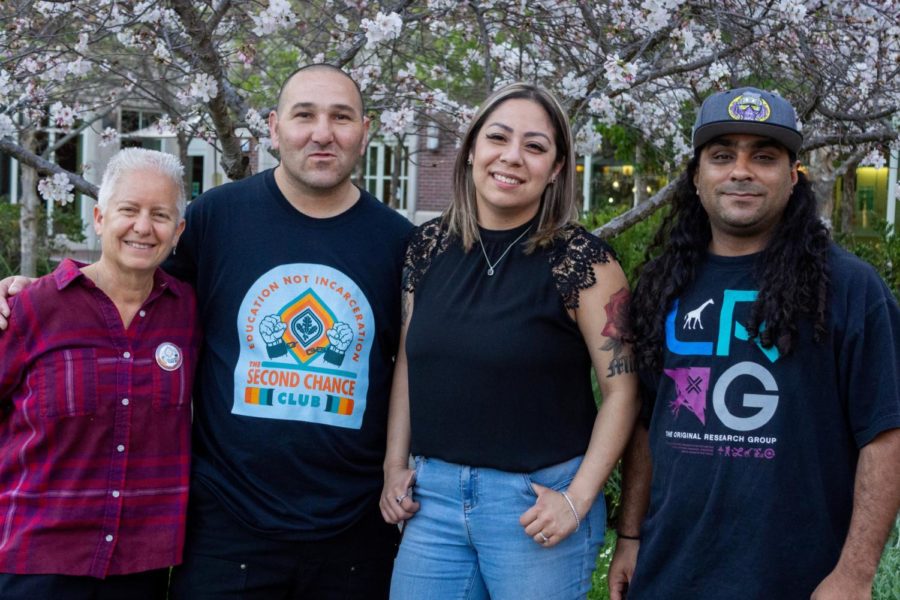 Apolinar Vega sits quietly at a table in Bertolini Student Center, listening as fellow students trickle into the conference room discussing exams, family and summer plans. One woman keeps her distance in the corner, worried the stink from her cabbage lunch concoction will offend if she gets too close. Vega and the other students are waiting for an unusual club’s meeting to begin.

Chatting about classes and using critical thinking skills is a stark contrast from a typical day in jail where the most stimulating endeavors are poker games with Top Ramen buy-ins or the unending and inexplicable selection of Danielle Steel books proliferating the communal book cart.

A year ago, the 23-year-old Vega was locked up in the Sonoma County Main Adult Detention Facility (MADF) awaiting sentencing for three felony counts of drug possession.

Vega, like many others caught in the system, was unable to afford bail and had no understanding of the law; he was forced to bide his time in custody while others decided his fate.

After a few months, the confinement overwhelmed him so much he was willing to accept any deal if it meant an early release.

“I couldn’t take it in there. I was kind of going crazy,” Vega said as he thought back to a conversation with his legal aide. “I just told him, ‘Try and get the best deal you can, and I’m going to take it.’ Now that I think about it, it was a stupid move.”

Two of the three felony charges were dropped, but Vega was convicted of felony possession of methamphetamines with intent to sell.

He narrowly avoided a prison term. After the judge considered time served, Vega was released on three-years probation, which he hopes to reduce with the support and guidance of the Second Chance Club.

Many of the warm-hearted people sitting at the table with Vega have spent time in jails and prisons throughout the U.S.; all of them have been incarcerated at some point in their lives. The Second Chance Club helps each of them navigate college after serving time.

Vega has attended regularly since his release.

As the meeting’s start time draws near, faculty adviser Rhonda Findling joins the group. It’s a picturesque, familial atmosphere as students of all ages gather to discuss the club’s plans for community outreach in Sonoma County. Many club members have already engaged with the community either as motivational speakers at local high schools or by creating workshops that feature local guest speakers.

Take Jerry Loya, for example. The 38-year-old club member spent nearly 12 years behind bars, bouncing in and out of incarceration since age 15 — until he decided to attend SRJC. Loya recently stepped down as vice president of the Second Chance Club to pursue a full-time job and help support his family.

“Just because we’ve done bad things don’t mean we’re bad people,” Loya said. “Everybody that’s in Second Chance — especially the ones going to the meetings — we’re all focused on what we want to do, and we’re all about helping people out and trying to get people to turn their lives around.”

His transition from life in the system to life in academia was not easy.

“I was still smoking crystal. I was still selling dope, running around when I was first going to school,” Loya said. “I was living in a trap house. It was crazy…, motherf*****s out there, shooting guns in the backyard.”

Loya may have served far more time than Vega, but being locked up is the same wherever you go.

Feelings of helplessness and worthlessness are prevalent, from the moment guards move you from booking and tell you to strip, bend over and cough while they watch — to be sure you’re not hiding contraband in your rectum.

“The treatment was f***ed up, man. Correctional officers, intake, everyone treats you like nothing, like you ain’t sh*t,” Vega said as he recalled his initial experiences in MADF. “Made me realize that I don’t ever want to come back in here; I’m just a number here.”

Vega, released from Sonoma County jail just prior to the 2018 “Ban the Box” law that prohibits employers from inquiring about criminal history on a job application, found it difficult to get work.

“It was tough. Everything would be going good until that felony thing at the end. ‘You’re pretty much hired, but all you gotta do is pass this background check,’” he said.

Vega also felt increasingly isolated and unsure of how to proceed or cope with his new reality. His five-year romantic relationship crumbled in the aftermath of his incarceration. Friends and family began to distance themselves. “Felon” is a label not many are willing to associate with, even indirectly.

“I went through it and I’m still going through it to this day,” he said. “I suffer a lot from depression and anxiety. I’m in the guilt phase right now. I’ve reflected on everything that I’ve done and, straight up, I messed up.”

In the absence of direction or purpose, Vega found inspiration to seek out college again in an unlikely place. He visited a friend in jail who shared the same detention unit with Logologoa Taumaloto Tevaseu, the former SRJC football coach now in jail for his involvement in a fatal car crash that killed a Sonoma State University student.

“He was locked up in that same mod as one of my friends,” Vega said, referring to Tevaseu. “He was spreading the word in there, ‘If anyone gets a chance to go to school, there’s a program called Second Chance. You guys should go, and you should go check it out.’”

Navigating the enrollment process and everything SRJC has to offer is a daunting affair for even the most dedicated of students. But for the formerly incarcerated, many of whom had no previous education prior to enrolling, the whole endeavor can seem insurmountable.

“You get [to the JC] and there’s nothing implemented or installed for you to hear about all the resources. All these resources are not advertised out there on campus,” Loya said. “There’s no guidance here for that — that’s why I like Second Chance, because we can offer those resources for somebody just getting out jail.”

As of Fall 2018, the club is also an official student services program, providing support and resources for formerly incarcerated students.

Old hands like adviser Findling and club president Elizabeth Quiroz strive to make the Second Chance Club an all-inclusive resource for those in need.

In 2005, Findling and two other staff members from the Extended Opportunity Programs & Services (EOPS), saw a need to create a support team for formerly incarcerated students.

This precursor to the club in its modern incarnation was modeled after City College of San Francisco’s Second Chance Program. SRJC’s program now serves more than 100 formerly incarcerated students, 40 of whom received grants for books this semester.

“We’re really building a jail to JC pipeline,” Findling said. “That’s why our motto is, ‘Education, not incarceration,’ because education turns people’s lives around.”

Quiroz, in addition to leading the club, is also part of Sonoma County’s Human Trafficking Task Force and assists with Woman’s Recovery Services in Santa Rosa. She is working toward her master’s degree in sociology with the singular mindset of giving back to the community.

“We have no judgment for one another and we feel like a family,” Quiroz said. “This is our family. It’s all love.”

Through Second Chance, Vega found a community he could relate to; he found people who understood what he was going through because they’re going through it as well.

While he is still trying to find his rhythm in college, Vega is content with how things have been developing since he enrolled. For the first time, he’s looking forward to what his future may bring.

“I’m just grateful for the chance of education being able to come here,” Vega said. “It’s been the best thing that I’ve ever done in my life.”