Memories: What can never be recovered will never be forgotten 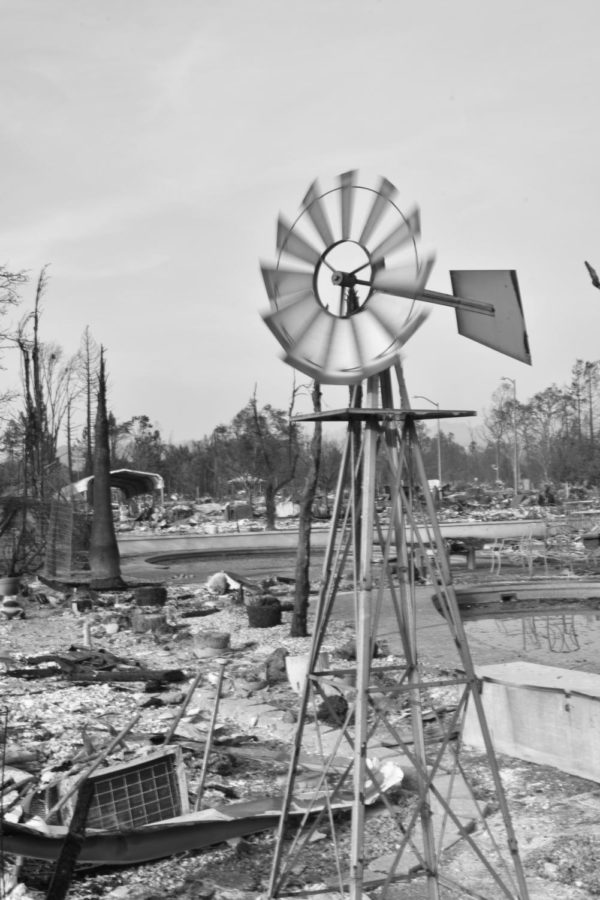 Metal, ceramic and ash are all that remain at the site of a Coffey Park lot someone once called home.

For Michelle Poggi, Santa Rosa Junior College director of student outreach, the memory of times spent in her family’s 28-year home on Astaire Court will be what she’ll miss most after the Tubbs fire claimed it, along with more than 6,000 other North Bay structures.

“The difficult thing was when my husband went into the debris and picked up our daughter’s ceramic Winnie the Pooh cup from when she was a baby. That’s when I kind of lost it,” Poggi said. “Things are just things, what we lost are the memories, but we’ll make new ones.”

On Sunday, Oct. 8, late into the night, Poggi and her husband Vincent were still awake when they sensed something awry.  “The power went out and we realized something was wrong,” Poggi said.

With no official notice, the smell of smoke told the Poggis it was time to move.

“We took our cat and I took my work laptop because I’m an employee at [SRJC], and I took a set of clothing I could change into because I thought I’d be going to work later that day,” Poggi chuckled, looking back on the foolishness of her mindset in that moment.

Her husband took nothing but the clothes on his back and as Poggi looked around, she felt there was really nothing there she couldn’t live without.

“Of course there’s things I regret not taking, like mementos of my dad who’s not here anymore, and of our children when they were babies,” Poggi said. “I have this firm belief that they are just things no matter what. As sentimental as I may be about them, we did the right thing in just leaving.”

As the Poggis left their home, they put a few things in the car, but traffic was gridlocked on their street and hadn’t moved an inch in what felt like 20 minutes.

“My husband walked around the corner to go look down Hopper Avenue and saw the flames and came back. At that point we decided we were going to walk out,” Poggi said.

They left their vehicles and walked about five miles to the Finley Center, arriving at about 5:30 a.m.

She and her husband, who are staying with her mother at a development in the Kawana Springs area, have been able to return to their destroyed home only once, for about 30 minutes, to retrieve her remaining car that was nearly untouched by the fires besides a few superficial burns.

“Compared to everything else around there, it looks pristine,” Poggi said. “It’s kind of odd that it was, for the most part, untouched.”

Not only did Poggi and her husband lose their house, but their daughters, who are in there in the early 20s, lost their childhood home. This was especially hard for their youngest, who had only moved out three months prior.

After calling Coffey Park home for nearly three decades and now seeing it reduced to nothing, Poggi said it’s challenging not to go to a dark place, but they’ve tried to remain resilient.

“We’re pretty strong, and I know we’re going to be OK,” she said. “I’m not the kind of person to curl up in a ball and give up. We’re just not like that. But it’s thinking about all those sentimental things that kind of does me in every once in awhile.”

Poggi has received support from all over, including her twin sister Marcia, but of all the support she has received, Poggi has been the most impressed by the SRJC community.

“I am so proud of our college,” Poggi said while fighting back tears. “I feel so good about the response from the college not only for the students, which has been phenomenal, but even for the staff and the faculty who’ve been affected. I feel so much of a community and I really think they did it right.”

The message Poggi wants to get out is she knows there are many with survivor’s guilt, but people need to share their joy of having a home because those who lost their homes need it.

“We need them to be the anchor in the community for us to then rebuild the neighborhoods and rebuild our community,” Poggi said. “We need them to just own that joy and share it with everybody and to not feel bad for it, because we need it so badly in this community. We need the joy.”