Healthy habits in a painful pandemic 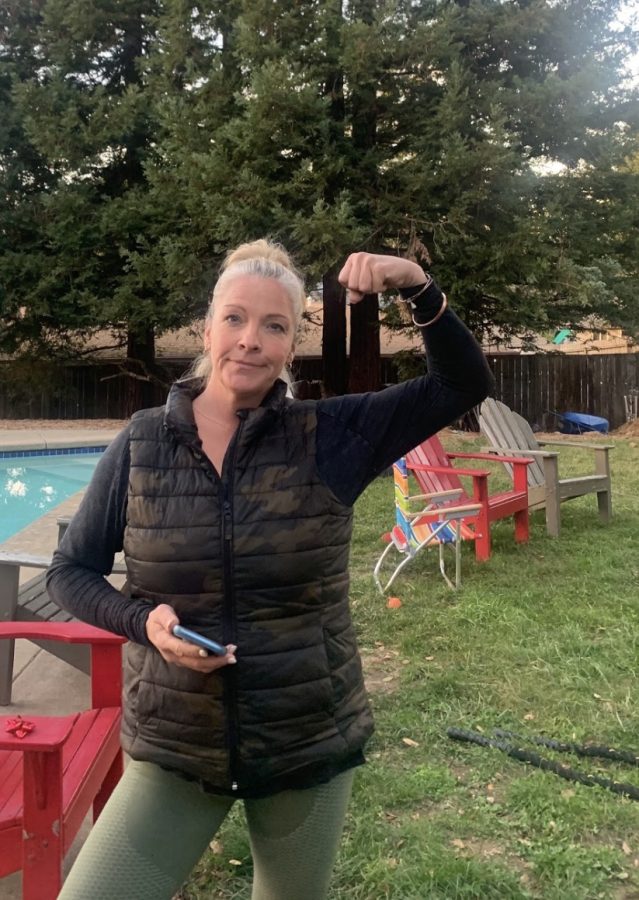 “Psychologically, taking the time to do something for yourself is really powerful and not just in a physical aspect. It makes you feel happier, more energetic and you can accomplish more ultimately,” certified personal trainer Myriah Volk says.

Exercising was the last thing SRJC student Autumn Antonson wanted to do.

“I struggled a lot, especially in the mornings, when I would have to wake up early,” Antonson said. “I would just be so exhausted and I didn’t want to even move.”

Antonson, 18, couldn’t muster the motivation to work out or keep herself healthy. “When I didn’t exercise, however, I felt really bad about myself,” she said.

Antonson felt useless and upset when she wasn’t active, which made her lose even more motivation to complete everyday tasks. Her lack of physical activity led to drastic mood swings, and that encouraged her to finally do something about it.

“I decided that I didn’t want to feel this bad anymore, which is why I started working out,” Antonson explains.

“Attending college during a pandemic made it even harder for me to find motivation,” she said. “Because I didn’t have the time or the resources to work out, I ended up feeling really bad.”

This is a problem many students can relate to, especially during recent circumstances. Students already struggle to stay on top of online work, battling motivation while attempting to stay positive during this turbulent time.

An article by Time magazine, titled “Here’s What Else Being Outside Can Do for Your Health,” shows that just being outside lowers stress and blood pressure as well as heart rate, and at the same time boosts mood and mental health.

Even just spending 20 minutes outside has been proven to greatly improve mental well-being. Even more surprising, some found that just being around the color green had a boosting effect.

The article shows physical activity is not needed to increase well-being, which means students are already receiving these benefits just by spending time outdoors.

However, physical exercise on top of being outdoors has an even greater effect. If a set workout schedule is too much for a student, then even getting out and walking for 10 minutes will do the trick.

Taking that first step to keep your body healthy can improve health, mood and motivation according to an article by ULifeline, a mental health awareness website for college students.

The article focuses on the brain’s usage of endorphins, a “feel-good” chemical that releases when you exercise.

Physical activity not only reduces anxiety and helps with self-esteem, but it also improves mental and physical health.

Gary O’Donovan, a research associate in the Exercise as Medicine program at Loughborough University in England, found that people who only exercised once or twice a week lowered their risk of death by 30% to 34%.

Antonson uses a combination of cardio exercises and ab workouts to see the physical difference that she was striving for. Her goal was to ultimately reduce belly fat and gain muscle, and she met these requirements in a short amount of time.

“The best case scenario would be that I would be able to see a noticeable difference in my stomach and waist. I didn’t do anything crazy, I just followed some workouts on YouTube and did a series of quick and simple exercises every day,” Antonson said.

“Personally, I like to follow Chloe Ting and her workouts, and I do these for an hour each day seven days a week,” she said. “Of course, it’s hard to follow that exact schedule all the time, but as long as you stick with it for the most part, you’ll get where you want to go.”.

She says her favorite part of being a personal trainer is seeing how people’s lives change for the better. “Not just physically, but mentally as well.”

Volk believes that every person is different and tries to get to know her clients personally to understand what motivates them as an individual. Volk then takes that information and uses it to her advantage.

“I encourage them to exercise on the days when we aren’t together so that they get stronger on their own in order to become more self motivated. I do like to help them along, but at the end of the day, the motivation has to come from that individual,” Volk says.

“I had a woman come to me. She wanted to lose 40-pounds because gay marriage was made legal and she finally got to marry her long-time girlfriend,” she said.

Volk’s client had recent health problems because of her weight, so she made a goal, hired Volk as her own personal trainer, and they completed her goal together. By her wedding day, her blood pressure had declined and her health issues were improving.

“She got to get married to her partner looking the way she wanted to look and feeling good,” Volk said.

Not only can exercise make a physical difference, it also makes a difference in your mood and state of mind.

For Antonson, working out made a huge difference.

“There was one night that I was feeling really depressed, and I hadn’t worked out that day,” Antonson said. “I had no interest in doing it, but I forced myself to work out for one hour, and when I was done I was genuinely shocked at how much better I felt.”

Once she started working out at home, Antonson felt a million times better about herself.

“Starting my day by getting active in the morning was better than being in my bed feeling bad. I also found that after working out, I felt much more energetic and eager to start my day,” she said.

Antonson can not only see improvement, she also feels an improvement.

“Almost immediately, I felt stronger in my body, especially in the areas I was focusing on, which felt great because it was what I was hoping to achieve. It’s different for every person, but I think it’s important to decide what you want, and to focus on that goal,” she said.

She was able to reach her physical goal, and was pleasantly surprised by an even bigger impact in her state of mind.

“It was hard to convince myself to do it because I don’t particularly like working out, but once I did, I felt happy and proud of myself about what I had achieved,” Antonson said.

As both Volk and Atonson exhibit, taking that first step can make a truly tangible difference.

For more information about Volk and her practice, visit Myriah Volk – Coaches Corner.