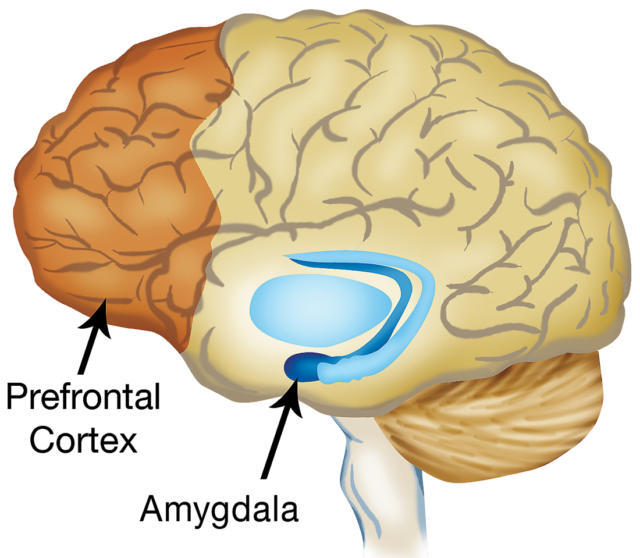 The prefrontal cortex and amygdala may be the two most important decision makers in the brain.

What happens when you drive up to a stop sign? You just want to drive right through it. You’re human. You’re not unique. Everyone wants to disregard stop signs, because everyone has an amygdala.

The amygdala is the part of the brain that processes emotions, and it’s selfish. It only cares about what makes you feel good. Stopping doesn’t feel good. When you see a stop sign, it tells you to keep going.

So why don’t we all blast through stop signs?

Because mammals are also equipped with a prefrontal cortex. The prefrontal cortex is the deep thinking, complex problem-solving part of the brain that human dominance owes its existence to. It is the executive decision maker that holds your inner, selfish desires in check so that the way you behave isn’t in conflict with everyone else.

It’s the area that says, “Wait a second. The stop sign means ‘stop,’ and if I don’t follow it, I could get in trouble or hurt somebody.”

You can satisfy both your prefrontal cortex and your amygdala if you slow down — almost to a stop — and roll through in true California fashion.

But how do these parts of your brain affect other, more important decisions beyond gaining a few seconds on the way to work?

Right now, an important decision is coming up in the form of the U.S. presidential election, and the same thought processes as listening to a stop sign play a part here as well. Most are aware that the presidential candidates have put out ads trying to gain your support, but not all know that these ads speak directly to eitheryour prefrontal cortex or amygdala.

Let’s look at some old examples of ads presidents have used on their campaign.

In this 1964 ad for Lyndon B. Johnson, it’s all amygdala. There are no facts that can be checked, and no mention of Johnson’s policy, but if you don’t vote for him, this innocent little girl is going to get nuked. This ad is designed to scare the viewer enough to not seek facts, and make an impulsive decision. This is like putting a tree in front of the stop sign so you wouldn’t notice it as you speed through the intersection.

Now here is an ad that speaks to the prefrontal cortex from Richard Nixon’s 1960 campaign. Nixon uses facts, logic and people’s understanding of money to make a case for why he is the better candidate. This gives the viewer something to think about and compare with other candidates so they can hopefully make a sound decision. This is like making a double-sized stop sign with a cop hanging out next to it. It’s still an attempt to scare you into voting for Nixon, but it’s making you take that three-second stop.

The majority of the ads out there are like Johnson’s ad, trying to get to your amygdala to choose for you. They are effective because siding with your amygdala feels good. If you let Johnson’s ad scare you, then voting for him relieves that stress. However, this choice is based on your own fear. It’s dismissing the fact there are other drivers on the road.

Fewer ads are like Nixon’s, because it’s harder to convince people with logic. The argument put forth by Nixon is something the viewer will have to think about, and in that time another candidate can bring in better facts and policies that can change your opinion. This leads to a choice that is based on information that applies to the rest of the country. It’s taking the other drivers into account.

So how do these ads compare to the ones you are seeing this year?

Here is one ad from President Donald Trump, and one from former Vice President Joe Biden. After watching these ads, ask yourself: do they provide any information? Something that can be googled? Would these ads make sense if they were used to promote someone else? Would anything have to be changed to make the ad promote someone else?

Now take a look at these campaign ads from Trump and Biden. What can be googled from these ads? How specific is the information? Is it easy to confirm or refute? Then ask what the information means and why the candidate wants you to know it.

The second set of ads takes a lot more work to understand right? They rely on information that needs to be confirmed and assessed before a decision can be made, while the first set of ads are self-contained. They invoke a feeling, and if you let it that feeling will make your decision for you.

It’s something to think about when you vote. Do you want to decide with your amygdala or prefrontal cortex?