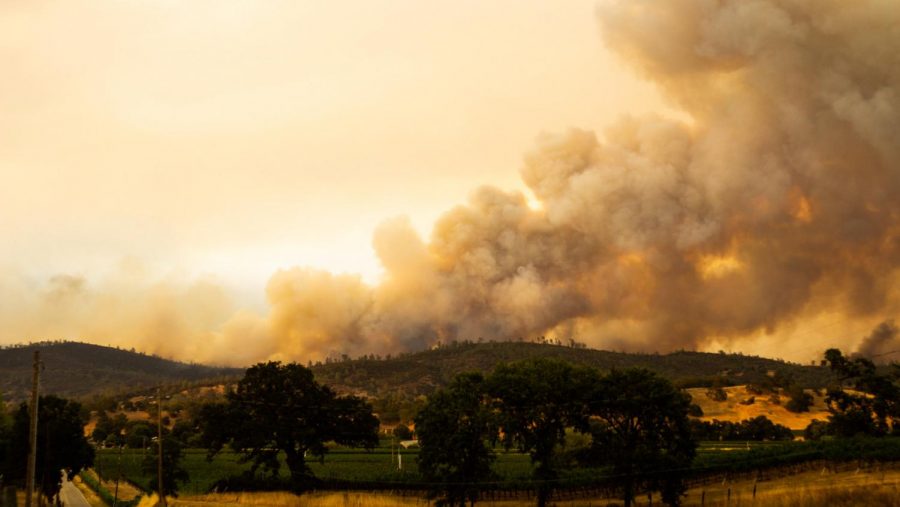 As if the global pandemic isn’t enough, Sonoma County residents wake up every day to the prospect of rolling blackouts, anxiety-inducing Nixle alerts and apocalyptic smoky orange skies, their well-being threatened not only by the invisible scourge of the coronavirus but the never-ceasing effects of climate change.

They feel those effects in the longer, hotter and drier days. In the later and later arrival of desperately needed rain. In the ease with which they can locate their N95 mask to wear under the simple cloth model they’d been sporting since March.

Sonoma County residents see the change in Northern California climate for what it is: a full-blown crisis.

According to CA.gov and California’s Fourth Climate Change assessment group, statewide annual temperatures increased 1.5 degrees in the last century. The 2012 through 2016 droughts were the most severe moisture deficits in the past 1,200 years. The Sierra Nevada snowpack is at a 1-in-500 year low. And on top of it all, temperature increases across the state will extend fire season through the region, especially in the elevated regions with depleting snow packs.

Further studies from CA.gov and the Climate Change Assessment show frightening possibilities for the state if further climate action isn’t taken; by 2100 annual daily temperature is projected to increase by 5.5-8.8 degrees Fahrenheit, water snowpack is projected to decline by two-thirds, and if greenhouse gas emissions continue to rise, the average area burned would increase by 77%.

“We’ve gotten hotter and drier summers I would have to say,” said Santa Rosa firefighter Dean Bourdage. Whether it’s global warming, naturally occurring or man-made, I don’t really know, but definitely our climate has changed and so we’re getting a much hotter, drier summer that goes for much longer than normal.”

Residents witness the changing climate not only here at home, but also when they travel. Sonoma County resident and SRJC history instructor Erik Bruce has seen changes within his community and across the nation.

“I’m an avid skier and have skied over the country in the last few years, and climate change is real,” Bruce said. “There’s just not as much snow. I think that humans like to put their hands on something, and if you’re not someone who’s not in the environment all the time it becomes easier to deny it.”

But a hotter, drier climate alone isn’t enough to spawn devastating fire. For that to happen, fires need fuel, and California’s forests are full of it.

After Indigenous people had their native lands stolen due to colonization and state power, the ecosystem began to suffer. Prescribed fires, also known as controlled burns, were a frequent practice of Indigenous communities but as native tribes were forced from their land, different methods of forest preservation have been implemented.

Many communities and homes have been built in fire-prone areas, making it almost impossible to do  prescribed burns for the sake of protecting residents. Without prescribed burns, the fires that break out cultivate massive amounts of fuel, which leads to more prolonged and deadlier fires.

California has 33 million forested acres in the state and 57% are federally owned. The remaining 43% of land is not regulated; 13.3 millions acres or 40% of that is owned, and the remaining 3 percent is owned by local agencies which also includes land trust.

This creates an inability for California to manage 100% of its forests and is complicated further by sprawling development that bumps up against wildlands.

Homes located near or on the outskirts of forest areas are proving to be a challenge when dealing with prescribed burns and forest management. Areas around Armstrong Woods, Del Rio Woods and Westminster Woods all pose problems when it comes to the protection of forests while maintaining the safety of nearby residences.

“We all used to think of fires in California being things that occurred in the Sierras or national forests, not something that occurred close to Sonoma County. Because of climate change and just the way we’ve managed fires, that paradigm has shifted in its entirety,” Bruce said.

And it’s not like the fires are spread across the county; in fact, there are four areas where fire seems to recur: The Tubbs area, Geyser Valley, Sonoma Valley and Guerneville.

According to  Sonoma Valley Conservation Action, the Tubbs area overlapped with the Hanly fire of 1964, the Porter Creek fire of 1996, the Morrison fire of 1960 and finally the Silverado fire of 1980.

In the Geyser Valley area, there have been two fires, the first in 2004 and the second in 2019 with the Kincade.

2020 is breaking all records with an earlier fire season that has already seen some of the largest fires in California history, and damage is still increasing with the recent Glass Incident Fire, Shady Fire and the LNU Complex Fire. Currently some 8,136 fires have burned 3,754,729 acres, destroyed 7874 structures and caused 28 deaths, with many fires still raging across the state.

All of these factors point to a climate crisis that forces county residents, and SRJC students in particular, to adjust.

“One of the biggest things that this has caused when you’re talking about fires themselves and smoke closures and power outages and COVID-19, it’s really just forced education for both administrators, instructors and students too, to be extremely flexible,” said Erin Bricker, SRJC director of district and community relations. “We can’t take anything for granted with regards to how instruction is going to happen and how class is going to happen.”

SRJC President Dr. Frank Chong also sees how the fires affect students but looks at it from a different perspective, one that positions the college as an important part of the community fire response.

“The only classes that are being offered in person [due to the coronavirus restrictions] are police and fire programs up in Windsor at our public health training center because it’s essential that we have firefighters and police trained,” Dr. Chong said. “But many of those classes are not the number we need in order to fulfill the demand; it’s very tough doing it safely.”

And while it might be comforting to some to know SRJC is preparing a new generation of first responders who will protect their homes and towns from the next firestorm, Burke can’t help but evaluate this fire season through a different lens, or a different mask, if you will.

“I think it’s just forced all of us to pivot based on ‘What’s the next thing?’,” he said.