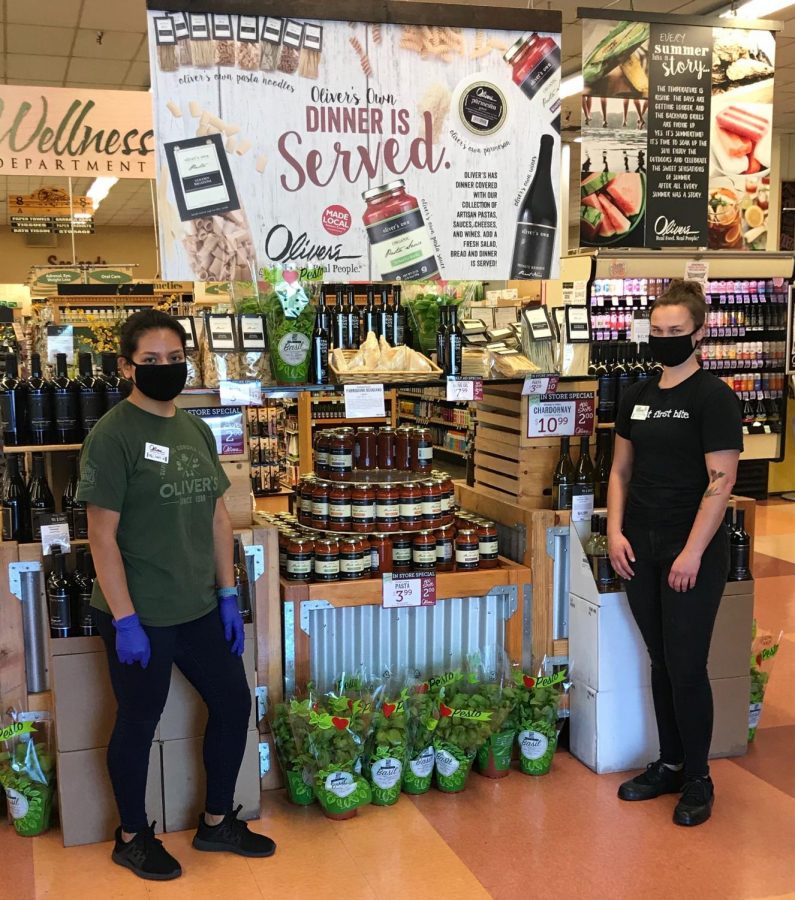 It was a normal day at work for Maiya Newsome until she was approached by two customers who were arguing about masks. The man was irritated with the woman for not wearing a mask in the store.

“Hey, I don’t feel comfortable. You need to put your mask on. It’s an ordinance,” he said, but she didn’t care.

“If you don’t put your mask on, I’m going to punch you in the f*cking face,” he said as he chased the maskless woman around Oliver’s Market.

Newsome froze at that moment and gave her coworkers a look that meant she needed help.

Newsome, 23, an SRJC fashion studies student, proceeded to watch over the two customers while they ran around the store to make sure the situation didn’t get out of hand as one of her coworkers ran off and called one of the managers. Management removed both customers immediately after they were informed.

Since the beginning of the Pandemic, Newsome dons a face mask and endures 40 hours a week working eight-hour busy shifts in the deli and produce department at Oliver’s Market in Windsor. She describes her situation with the face masks and the difficulty of getting used to wearing them in a fast-paced environment. “There was not a point where I wasn’t moving,” she said. “My coworkers and I had to step outside to get some fresh air because we felt like we were going to pass out.”

It’s grocery workers like Newsome who struggle at times with wearing masks for full eight-hour shifts, yet they understand the significance of following these precautions and try to enforce the mandatory regulations.

Employees from Oliver’s Market, Trader Joe’s, Smart and Final and Safeway discussed with The Oak Leaf face mask rules for both employees and customers at their stores and how they deal with noncompliant customers, fondly called “maskholes.”

“Everyone entering the store, working and/or shopping in the store must have a face covering that covers their mouth and nose at all times,” said Carolyn Borr, an 11-year front end customer service manager at Cotati’s Oliver’s Market.

Borr recalls a moment when mask disobedience led to police involvement. “I’ve had to confront numerous people, but one woman that stands out was refusing to put a mask on and she refused to leave the store,” Borr said. “She said that she was going to call the police, and we happened to have the police here working on something different. So I had security bring the police to her and they escorted her out. If you need shopping done, we’re happy to do it for you, but you can’t be in the store without a mask on.”

Ellendril Johnsen, 42, a front end lead at Oliver’s Market in Cotati said, “Some people have called to ask, ‘Well what are you going to do to me if I don’t wear a mask in the store?’ trying to figure out whether or not we would get Cotati Police Department involved.”

Workers feel like customers who refuse to wear a mask are inconsiderate. “How dare you? How disrespectful can you be, you know? I’m here trying my best to do this and I don’t get a chance to walk away and take my mask off,” Newsome said.

Mason Medley, who’s worked for Trader Joe’s for three years, said, “When I see a customer not wearing a mask, I get slightly annoyed by their selfishness and lack of consideration for their fellow customers and the people who are providing them a service that keeps them and their families fed.”

Even if they begrudgingly don a mask, people might remain inconsiderate at heart. Richard G., a 54-year-old SRJC computer science and networking major, has worked as a butcher at Smart and Final for about three years and said, “We can’t teach people to care about others if all they do is care about themselves.”

When dealing with tough customers and scenarios, Newsome tries to remind herself, “We’re all in this together.” She elaborated, “I’ve had small instances with individuals where they’ll be wearing it half on or maybe not at all. They sort of go ‘Oh whatever, fine.’ They turn into a grump or a snob, but I haven’t had anyone attack me.”

Customers may not realize the reality grocery workers face everyday. “It’s just 10 minutes of your time with the mask on to our eight to nine hours,” Borr said. “I don’t think people realize how hard it is for grocery workers to be here nine hours a day with our mask on with people calling us names and treating us poorly if we ask them to cover their mouth and nose because it’s our policy.”

Newsome reiterated Borr’s time comparison. “The amount of whining and complaining from people who are not even in our store long, God knows maybe 20-40 minutes,” Newsome said.

In the end, these grocery store employees know the risks of coming into work. As the pandemic develops and policies change, these employees respect the rules so that they have a smaller chance of getting COVID-19.

“I had a family member that got COVID from a casual conversation. It was a short interaction and she ended up getting very, very sick, so anything that protects people, I’m all for,” Borr said.

When asked about her support for masks, Monica Singh, 19, a second-year Sonoma State student and Trader Joe’s employee, said, “I believe it is our moral obligation. They are certainly effective when used appropriately and even more so when sticking to social distancing guidelines of 6 feet apart.”

All county grocery stores mandate masks for both customers and employees. However, some differ in their rules for when and where employees can remove their masks.

Nicoas Pagan, 18, a first-year SRJC student and multipurpose clerk at Windor’s Safeway, said employees were provided masks when the pandemic began and are expected to wear them in the store.

“During my full eight-hour shifts, the only time I can take off my mask is when I use the restroom, am on a break or at lunch,” Pagan said.

Newsome questions the safety of removing masks while taking breaks indoors and suggests moving breakrooms outside to avoid the spread of COVID-19 in closed-up quarters.

“So it’s kind of like a strange gray area, where we need a place to sit down and take a break. What I see most often is that there are at least three people at a time in the breakroom who have their masks off, pretty much for about a period of 30 minutes or more. I kind of wish they would say ‘Everybody go outside because we’re trying to keep down exposure,’” she said.

For customers, most grocery stores either say wear them or leave.

Monica Singh said Trader Joe’s is strict about masks but makes exceptions for infants and small children.  “If a customer forgets their mask, they are welcome to just stay in the car and give us a list to shop for them. Otherwise they must return in a mask to shop themselves,” she said.

“It’s got to cover your nose and mouth, you can’t just walk around with your nose out,” said Ellendril Johnsen of Oliver’s Market.

When asked why a customer would decline to wear a mask, Richard G. said, “They usually complain about their rights being violated.”

Other grocery stores might make an exception for those who can’t wear a mask for health reasons, but some are not able to enforce mask-wearing in general.

“Unless a customer has a severe breathing condition, all customers are required to wear a mask at all times,” Pagan said. “We are not allowed to force customers to wear a mask though, due to a recent altercation between an employee and a customer.”

Medley of Trader Joe’s said, “There have been a few occasions that I have witnessed where customers refuse to wear a mask,” he said.” In those cases, usually a manager will offer them a mask and if not they will be asked to leave unless they claim a medical exemption.”

“Why go into a place with no mask if you’re high risk?” said Johnsen from Oliver’s Market.

Having a medical condition is another reason people refuse to wear a mask. If you’re shopping at Oliver’s Market, they have a solution for you.

“We explain to the customer that we will provide reasonable accommodation and do their shopping for them. We put in place a payment method so we can bring their groceries literally out to them,” Borr said. “They can look them over and see that it’s the correct items. We ring it through the register, bring the receipt out to them with the groceries and they do their payment on this portable square or they pay us cash.”

With accommodations like these, stores remove customers’ motives to enter the store without a mask.

Grocery workers urge customers to treat them with respect during this difficult time. “We’re trying to earn a living, we’re providing a service for these people, I wish there was more understanding on their part,” Borr said, “At times, I would rather not be here if people aren’t taking my health into account, but I feel lucky to have been able to work through this, although it is stressful.”

Most of all, the workers just want customers to be considerate of others and follow the guidelines. Don’t be a maskhole.