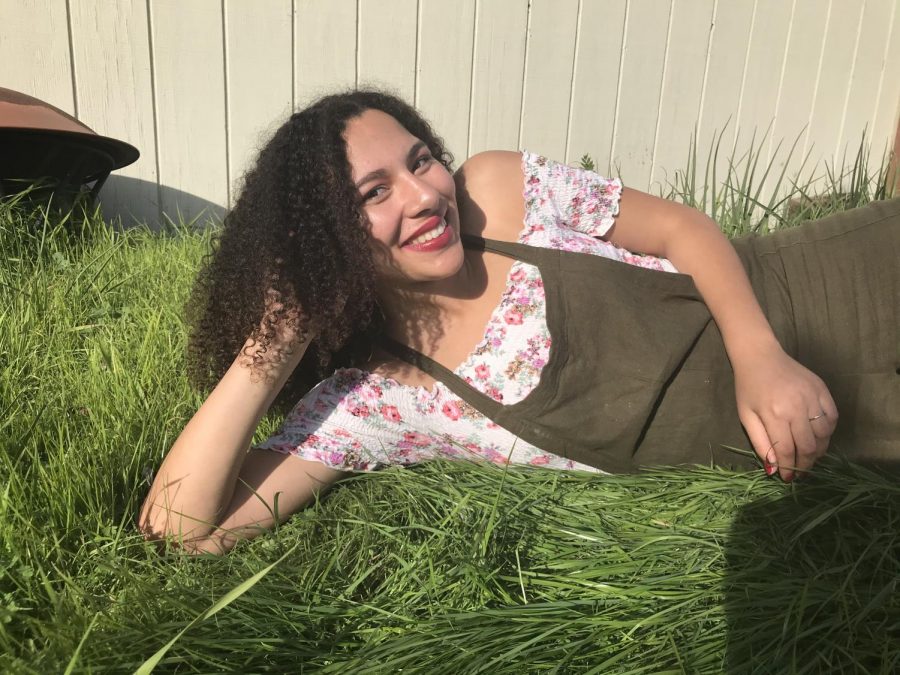 Kylie Johnson is an SRJC graduate who suffers from severe asthma and is trying to balance the pandemic with plans to study fashion in Milan, Italy.

On a normal afternoon, you would typically find Carson Pforsich at his adapted PE class at Santa Rosa Junior College or coaching high school football. You would see Kylie Johnson on her way to her sewing class preparing to transfer to a fashion school in Italy next semester. You would see Connor Kearney working on cars or studying calculus in Doyle Library for his engineering classes. Days like these are now far away.

The three students have been confined to home like all of us; however, these students are among those who are most vulnerable during the COVID-19 pandemic.

All three have pre-existing conditions.

Although almost 800 Americans under 50 have died from COVID-19, according to The Washington Post, these students have adjusted smoothly and with remarkable optimism.

Carson Pforsich, 20, suffered a spinal cord injury in September 2017 that left him with a weakened diaphragm among other ailments.

“If I cough, I can’t cough very powerfully, but my lungs are super healthy,” he said, acknowledging he’s still a generally healthy young man. And he’s hopeful. “If I get it, my body is probably still able to fight it off,” he said.

Kylie Johnson, 21 and Pforsich’s cousin, is an SRJC business major who suffers from severe asthma, making it hard for her to exercise or be active. Before the pandemic, she attended class five days a week and worked one day. Now she’s only delivering the occasional DoorDash.

Because of the pandemic, she’s been taking extra precautions. “I clean my room three times a week,” she said. “When I DoorDash, I wear a mask and gloves. I put all the food in a tub in the passenger seat. Then I usually shower and wipe down the car when I get home.”

Johnson’s family has also taken extra precautions for both her and her cousin. “My dad has cut his work down by half, and my mom only leaves for grocery shopping.”

Connor Kearney, 21, an SRJC engineering student, has Type 1 Diabetes, which he manages well; he’s fit, healthy, loves hiking and takes his insulin only once a day. He, like Pforsich, has a positive attitude during the pandemic.

“I’ve looked into it, and people with well-managed Type 1, especially young people, haven’t really had more complications with the virus than normal people.”

Kearney is careful, but not overly so. “I don’t take any more precautions than I would say the normal person would,” he said.

Before his injury, Pforsich was a receiver for Analy High School’s football team. Now, he’s a receiver’s coach for its JV football team and takes pride in the impact he makes with his players.

“That involved a lot of actually being at practice, keeping up with the kids, making sure they’re keeping up on their schoolwork and their athletics,” he said.

It is unknown what the future holds for the upcoming season, but the coaching staff has been doing weekly Zoom meetings with students to stay connected. “We have no idea when we’re going to be able to get out on the field physically,” he said, though he remains optimistic about coaching this upcoming season.

Johnson now spends her days gardening, sewing, doing homework and playing ukulele. “I do a lot of homework,” she said. “My teachers have amped up the homework big time.”

Like Pforsich, Johnson doesn’t worry about her health. “I feel like I should have more anxiety about my asthma, but mostly the anxiety is from being at home and not being able to do anything about it or work towards the future right now,” she said.

Johnson was accepted into a fashion school in Milan, Italy, but the pandemic has thrown a wrench in her plan. “Well really, I don’t know what I’m doing next,” she said. “I had a plan and now my plan is just gone.”

Kearney’s normal day would consist of going to class, studying, working for the city of Santa Rosa and spending time with friends. Now, he stays at home and like Johnson, struggles most with online schooling.

“I mostly stay inside by my computer doing homework. I have lots of homework that is required to be done on a computer, which is awful,” he said.

He plans to attend CalPoly in the fall and hopes desperately the pandemic will not affect his chances of transferring. “I have to finish this semester, ” he said. “I’m still planning to leave.”

Pforsich and his family were scheduled to go to Thailand in February for his stem-cell therapy treatment. “That was before everything got shut down, but we made the decision not to go,” he said.

This treatment is vital for Pforsich; he said it’s what got him out of a motorized wheelchair and into a manual one after he regained movement of his arms.

He is patiently waiting for this next stem cell treatment because he is still improving from his last one.

“I’m still progressing right now, and they told me I didn’t really need to go back until I plateau,” he said. He hopes to return to Thailand for more treatment when it is safe.

“It’s definitely in the future plans, we’re just not sure when that’s going to be.”