Out of stock: Panic buying in a pandemic 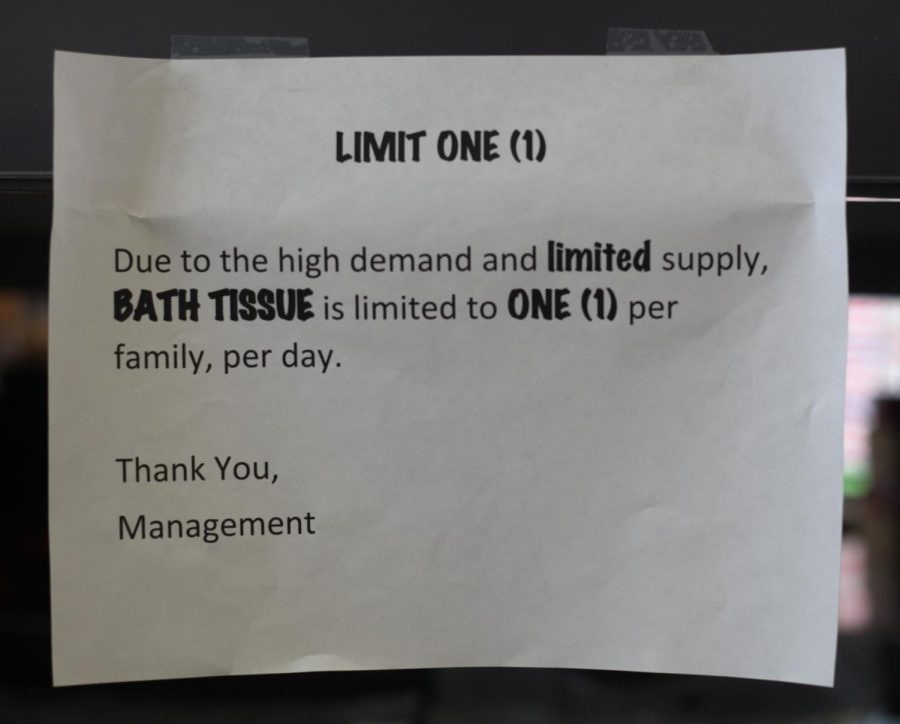 Because of the initial panic buying, certain items are sold with a cap on the quantity a buyer can purchase, other items have been slow to return to grocery store shelves at all.

Santa Rosa resident Barbara White was scammed into purchasing a pack of toilet paper online for $70.

“As the days wore on, I checked at various stores. The toilet paper shelves were constantly empty. This created a feeling of resentment towards people reacting in fear and thinking only for themselves,” White said.

She scoured many stores and checked Amazon.com for toilet paper with no luck. Finally, she found a pack on eBay.

“The description made it sound like a large order with many rolls of toilet paper. Relieved and desperate, we purchased it for $70 plus shipping,” she said. “A few days later a pack of eight rolls arrived. We had been scammed, gouged, fooled and taken advantage of. We filed a complaint, returned the package and got refunded.”

White managed to locate a pack of toilet paper at Safeway by arriving early in the morning. “I saw customers holding toilet paper packages. I immediately went to the shelves and found a small pack of rolls and felt like I hit the jackpot. Of course there was a sign out saying ‘limit one package per customer. It didn’t matter; I got something to carry us over for a couple weeks,” she said.

The grocery store, once a safe haven for shoppers, is now a war zone between people and the virus. The aisles don’t look like they used to. They are stripped of items we took for granted. Now when we shop, we are frantic, looking for items we deem essential for our comfort in these uncertain times.

“I felt sad and anxious looking at the shelves of formula in particular, thinking how stressful it must be for other parents who need those cans and need them often,” said Santa Rosa Junior College student Lauren Spates. “New parents have enough worry in their lives without having to concern themselves with the supply chain.”

In the beginning of the shelter-in-place directive, people were uncertain of what would remain open and what would close. Grocery stores swarmed with anxious buyers.

Work life changed drastically for Seaira Provost, an employee at a Whole Foods in Santa Rosa.

“People went nuts,” she said. “There were lines all down the aisles. So many out-of-stocks. It was random stuff, too. Eggs sold out. Flour sold out. The entire frozen foods section. Hand sanitizer and toilet paper and paper towels. A man completely lost his mind at my co-worker because we sold out of honey.”

The bulk buying led to shortages that reached beyond the store itself.

“We sold out of stuff at such a velocity that the vendors and distribution centers where we get our stuff actually sold out too,” Provost said. “We were only able to bring in about 20% of what we normally do.”

As a result, many consumers were not able to access essential products, leading some to pay outrageous prices for items such as toilet paper. Families with babies and people with special needs were even more concerned, especially when they could not make it to the store before many items sold out.

Why is it that these items disappeared at such a fast rate?

“When people make decisions, we often rely on heuristics, or short cuts, especially when we’re tired or stressed or overwhelmed,” she said. “In particular, people use the availability of heuristics. Familiarity increases availability, so things we see/hear about more often seem more likely than they really are,”LaVoie said.

“Said in another way, when we read stories about panic buying or possible supply chain problems, it makes us think we’re in danger of running out of things and leads to panic-buying. If we didn’t hear about or read about panic buying we would be less likely to do it.”

It wasn’t just toilet paper and hand sanitizer. It turned out that many people had their own special items they needed in case they couldn’t get to the store.

“Yeast is my go to when I’m trying not to eat sugar when I’m bored,” Rush said.

“I did a bit of hoarding with chapstick,” Combs said. “It’s a personal comfort, and I didn’t feel like I was taking something from someone when I got extra. I was concerned that essential businesses would soon only be able to sell essential items if the COVID-19 situation got worse.”

SRJC student Griffin Schouten stocked up on marijuana. “I was afraid dispensaries would get shut down so I acted preemptively. I spent $150 or so at the dispensary,” she said.

“What’s the one thing that will keep me sane if I can’t have my medications?” Sullivan asked. “I didn’t stock up on toilet paper because I own two bidets, but bought some extra to try to sell for $5 a roll. It didn’t work out.”

Emily Rune, a Santa Rosa resident and SRJC graduate, purchased items for meal prepping in case the stores would be closed for a couple weeks.

“When the shelter-in-place order began, I immediately went to Oliver’s Market and bought three whole chickens,” she said. “I was so stressed about not being able to go shopping again for a few weeks. I knew I could make comforting chicken soups and have meals for the week.”

She also purchased stamps, a puzzle and 10 boxes of Amy’s mac ‘n’ cheese.

While the grocery store experience has changed, so has the perspective of some shoppers.

“This experience has me appreciating the days of rationing during the depression years,” White said. “Furthermore, it has made me become more mindful of what I purchase. Is this purchase necessary? Will my purchase deprive someone else who may need it more than me?”

Because of the initial panic purchases, some items have been slow to return to the shelves. Shoppers are coping and learning to adapt to the current circumstance.

“It is amazing, after two months, toilet paper supply is still scarce. If we run out, we look for alternatives. Meanwhile, we are making sure we are not using more toilet paper than necessary,” White said.

“Toilet paper has brought us to a whole new level of awareness, mindfulness and appreciation. Who knew?”