Considering her last words: A Bahamian SRJC student and her family’s survival through Dorian 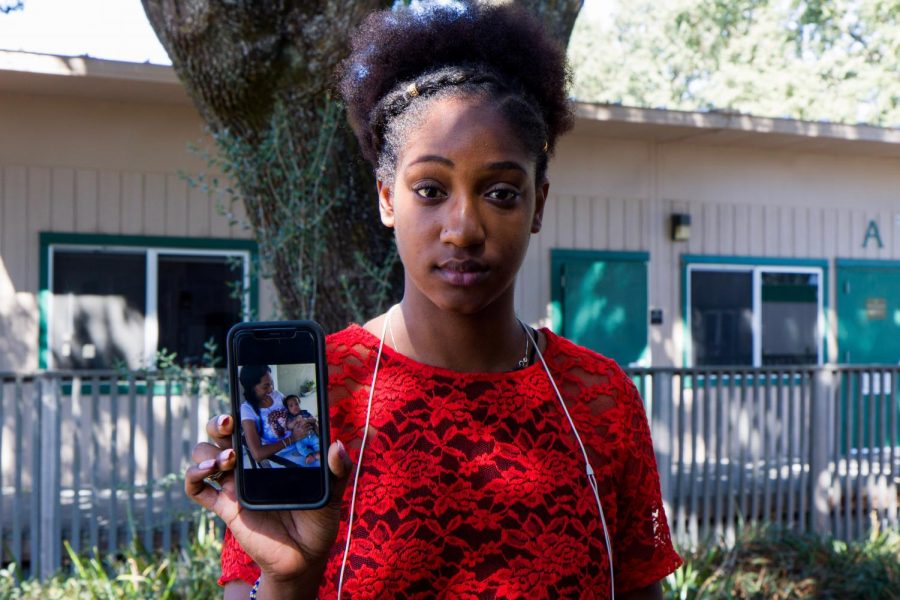 Anetra McCartney, 24, holds up a photo of her mother Sylvie McCartney and her newborn brother, Braden, radiating joy. McCartney lost contact with her family during Dorian and thought this photo could be their last.

The last time Santa Rosa Junior College international student Anetra McCartney visited her family on Great Abaco Island in the Bahamas was May 29. The three precious days she spent with her mother, Hepzibah “Sylvie” McCartney, and getting to meet her newborn brother Braden for the first time filled her heart with joy and a longing for home.

“We just talked, had jokes. We got the chance to meet and be together and it was really nice,” McCartney said.

Three months later, McCartney would spend a terrifying week wondering if that May visit would be the last time she’d see either of them alive.

Home will never be the same for 24-year-old McCartney and her family. Last week, on Sept. 1, what started as a tropical storm morphed into Hurricane Dorian, gaining strength as it turned westward from its projected path, setting its sights on the northern islands of the Bahamas.

As the storm neared, Sylvie stayed in communication with her two daughters. “She was sending me pictures of the storm, how big it was gonna be, and pictures of my little brother,” McCartney said. “She told me she was scared, and my mom is a really strong person.”

Panic set in for McCartney when her mom stopped returning texts. Sylvie sent her last message before the hurricane hit at 1 p.m. Bahamian time Sept. 1.

“I saw videos of how big the storm was, and the water started rising, and the winds were blowing harder,” McCartney said. “Seeing all that and not hearing from them was when I was most panicked.”

McCartney said hurricanes are a part of life in the Bahamas and that her mom was used to waiting them out, but Hurricane Dorian was different.

Before it traveled up the Atlantic Coast all the way to Nova Scotia, it swelled into a Category 5 storm and ripped across Abaco, making landfall with wind gusts up to 200 mph just miles south of Treasure Cay where Sylvie and Braden took shelter.

A 20-foot wall of water followed, pushing onto the islands and flooding everything in sight. Dorian destroyed 60% of homes in the northern part of the island and damaged the power grid beyond repair. The official death toll is 50, but at least 2,500 people are listed as missing.

“I’ve been through Category 3s, 2s, but for this one there’s absolutely no comparison. The winds were moving at 185 mph,” McCartney said.

The news that her mother and 3-month-old brother might not survive one of the worst recorded storms in Bahamas history devastated her.

From the second she knew her family was in peril, McCartney couldn’t sleep. She had trouble attending classes. She put all her energy into acquiring information on her family’s whereabouts and trying to retain her composure.

For the next five days, McCartney and her sister, Laquinta Moss, spent most of their time adding Sylvie to missing persons lists, sharing her picture online and trying to contact family, friends and neighbors to determine their mother’s last whereabouts.

Even with an ocean between them, Moss could feel her sister’s distress. “She’s a worst case kind of person,” she said.

McCartney said communication is usually poor during hurricanes, so she knew that it could take days to figure out if her family was alive.

“At one point, I stayed up the whole [night]. I refreshed and refreshed [web pages], trying to see if anyone had information. Me and my sister would stay up on the phone and try to make each other laugh,” McCartney said.

Moss, 22, was in Nassau during the hurricane. Though the storm largely missed the country’s capital, Moss still felt the psychological effects of the devastation and feared for her mother’s life.

McCartney admitted the hardest part was being so disconnected from the wreckage, and keeping hope her family was still alive while seeing the catastrophic damage the hurricane was doing to Abaco.

“When you live on an island close to the beach, and you have no hill or anything that gets impacted by the storm greatly, [there’s no protection]. The only thing I was doing was thinking for the worse,” she said.

The following Thursday, Sept. 5, the sisters found out their mother and brother were to be flown out of Treasure Cay when the island was being evacuated. She and many others were ordered to fly out on planes that didn’t exist, causing panic and even more loss of life. “They [the government] didn’t take it seriously,” Moss said.

Moss’s friend Craig Harper was able to request a spot for Sylvie and Braden on Odyssey Aviation, a private airline.

On Thursday, Sept. 5 they deserted the island at around 6 p.m. Bahamian time, four days after the storm. McCartney was finally able to speak to her mother for a brief moment, during which Sylvie relayed her harrowing thoughts as the Hurricane threatened to kill her and her son.

“She was saying that she didn’t think she was going to survive,” McCartney said.  “She was trying to figure out a way to get her last words to me and my sister.”

The concrete walls of Sylvie’s home in Treasure Cay, meant to withstand the violence of any disaster, were dancing like Jello during Hurricane Dorian.

McCartney couldn’t have imagined how many dead bodies, swollen in the sludge that was once Treasure Cay, her mother encountered in her flee to safety. “She told me she sees why soldiers have PTSD. Nobody is really prepared to see dead bodies. Every time I talk to her, she has flashbacks; she has to get off the phone,” McCartney said.

The water and winds have now settled, the ebb and flow of the tides frame an island of nothingness. Everything that Sylvie McCartney and Braden knew on Great Abaco is gone. Grand Bahama Island, which the hurricane stalled over for more than a day, also suffered cataclysmic damage.

“They have to basically start over. They have to rebuild the whole two islands because of that. I feel like she lost everything she went over [to Treasure Cay] for,” McCartney said.

The only possessions Sylvie could grab were some important documents and clothes; she and Braden have nothing.

With nothing left to return to, McCartney’s mother is currently waiting for Canada or America to open their borders to refugees. McCartney said wherever her family is able to go, she wants to follow. She lost her father about two years ago, and the possibility of being orphaned by this hurricane weighs on her psyche.

“It’s hard. You try to be in school, stay focused, make something of yourself. But when something like this happens, what do you do?” she said.

All McCartney wants is to hold her baby brother and sing to him. She whips out her phone, cracking a smile, playing videos of Braden radiating joy.

While coming out of this experience a little malnourished, Sylvie told McCartney the storm could not sink Braden’s spirits.

“For him to be so strong, and get through it, I’m so proud. I was scared for both of them,” McCartney said.

When chaos comes to a close, McCartney intends to return to the Bahamas to reunite with her family. Facetime can only provide a degree of intimacy, and McCartney says her mother longs for her support.

“My mom was like, ‘I just need a hug from you really bad,’” McCartney said.

When McCartney was growing up on the island of Eleuthera, she didn’t spend quality time with her mother often.

“We never really lived together growing up because she had to work on different islands to support me and my sister. I grew up with my grandma mostly. I feel like I haven’t had a lot of time with them,” McCartney said.

A dedicated SRJC student pursuing a degree in dental hygiene, McCartney first attended college in Florida before moving to California.

“In the Bahamas, it’s hard [to get ahead]. Unless you live in Nassau, that’s the only college. Even the other college in Freeport, that was damaged by the hurricane,” she said. “My mom never wanted me to live there because of all the crime on that island [Nassau]. Before I even knew that, I moved over here, but I’m ready to go back home after everything.”

McCartney moved to the U.S. in search of opportunity, only to see her country and community devastated by Dorian. But now – more than ever – her heart yearns for the islands.

A GoFundMe site has been set up to help Sylvie McCartney and Braden begin picking up the pieces of their lives and move on from this horrific natural disaster.