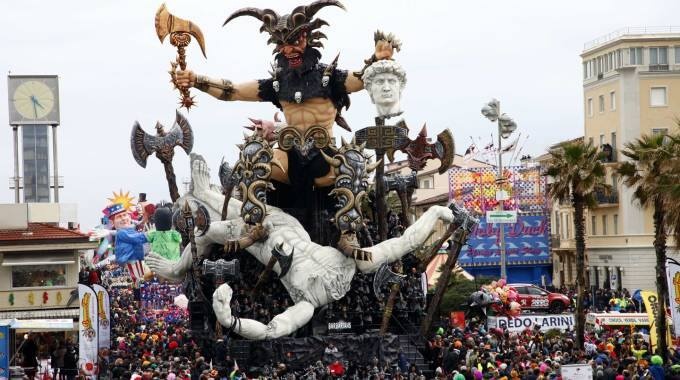 Carnival float in Viagreggio that takes place end of January through the beginning of March, a possible field trip opportunity for Florence Study Abroad 2020.

Cross international waters. Stroll down cobblestone pathways at dusk. Clink wine glasses as your eyes wander onto the Ponte Vecchio while the sun takes its final bow. Many college students see international travel as an item on their post-education bucket list, but for Santa Rosa Junior College students, this opportunity is not as far away as one might think.

SRJC offers the study abroad experience for students who want to knock out classes such as U.S. Government or International Relations in centuries-old buildings in picturesque locations such as Barcelona, Sicily or Florence.

Studying the world’s most valuable works of human creation while simultaneously experiencing it firsthand dovetails perfectly into SRJC’s mission to “offer a variety of programs and services that will provide students, faculty, and the community at large with the knowledge, skills, and cultural experiences necessary to become well prepared members of a global society.”

Students who wish to study abroad with SRJC must be in good academic standing, with at least 12 units and have a minimum of a 2.25 GPA. The semester occurs over a 13-week period and requires students to take at least 12 units within the study abroad program, three units of a Life and Culture class, and two other classes from a class catalog provided by the SRJC and other schools partnered with American Institute for Foreign Study (AIFS), the group that coordinates American travel and insurance on a national scale.

Every semester SRJC Study Abroad sets its sights on a different, culturally enriching location. This spring, students are studying in Florence and in the fall of 2019, SRJC and its travelling students will reside in Barcelona, Spain.

Study abroad student Natalie Lester has been documenting her experience in Florence on her blog, “My Adventures in Europe”. In February, Lester wrote that she has been experiencing “typical things that all travelers experience… jet lag, culture shock, homesickness.” In an update from March, Lester reveals that she has finally found her groove “might be in love with springtime Florence.”

Kinesiology major Natasha Moore is preparing for her whirlwind academic adventure in the fall to Barcelona. When Moore first began the study abroad application process, she had a difficult time deciding between Barcelona or Florence for Spring 2020. She based her final decision on which trip was cheaper; the trip to Spain is about $1,000 less than Florence.

“I initially wanted to go to Italy, but it’s more expensive. Spain is more of a lively country,” Moore said.

Moore knows that living in another country for those 13 weeks will be a major culture shock, but she is also excited for the freedom and growth she will experience in Barcelona.

“I’m most excited to live on my own for the first time. It’s very scary, but also exciting,” Moore said. “I’m going to have to trust myself in possibly unsafe situations, do my homework and live it up in Spain at the same time. It’s going to be a culture shock,” Moore said.

Although deadlines have passed to enroll in the Barcelona program next fall and the Sicily trip during summer 2019, SRJC is now preparing its spring program to Florence in 2020.

Jeanette Benfarhat, a political science instructor, has previously taught in Florence as an instructor for SRJC and beams with excitement when discussing her return to the historic city.

“There’s a ton of overlap between my political science class where we talk about immigration issues, and ethnicity issues and things like that, with the sociology class,” she said.

Farhat notes that studying abroad is an experience radically different than travelling on your own leisure and encourages students to take the once-in-a-lifetime opportunity.

“I went to Florence this summer. It was hot as hell, it was miserable, it was full of tourists. But when you go in February, no one is around,” Benfarhat said.

When discussing costs for the Florence semester, Benfarhat offered a realistic perspective.

The base price of SRJC Study Abroad in Florence is approximately $8,000; this includes the class costs, various orientations, housing and mandatory fees such as police registration and medical insurance. Airfare is not included.

Benfarhat understands the price is steep for many students, but she notes it is comparable to the cost of living in Sonoma County for three months – the same length of time.

All other expenses cost less. According to Benfarhat, Students won’t need to pay for gas, and meals are much less expensive than they are in the U.S. “You can have dinner for like, seven euros,” she said.

Benfarhat also makes the comparison that one semester at a four-year university, such as Chico State University, can be around $12,000. This alone is more expensive than studying abroad with SRJC. In Farhat’s opinion, there is less room to grow in a dorm room versus a historic metropolis like Florence.

Benfarhat points out that there are numerous scholarships available on the SRJC Study Abroad page, and all financial aid that SRJC provides to students is still redeemable overseas.

From an instructor’s perspective, Benfarhat wishes she would have studied abroad herself in her college years. “The one thing I regret about my college days is that I didn’t study abroad because it’s something that you can’t replace. You can go travel, but that’s a different experience,” she said.

Benfarhat will be at Day Under the Oaks April 28 to discuss the Study Abroad program. She will also hold two informational meetings about the Florence 2020 trip April 30 and May 13. More information about SRJC Study Abroad program can be found at https://study-abroad.santarosa.edu/ and on their facebook page at https://www.facebook.com/SRJC-Study-Abroad-Program-677856459033579/?epa=SEARCH_BOX

“One of the most beautiful things about being abroad is that you’re in these spaces that are hundreds of years old,” Benfarhat said. “We [Americans] don’t appreciate what it means to a culture to live in that space where people have prayed and visited for hundreds of years.”