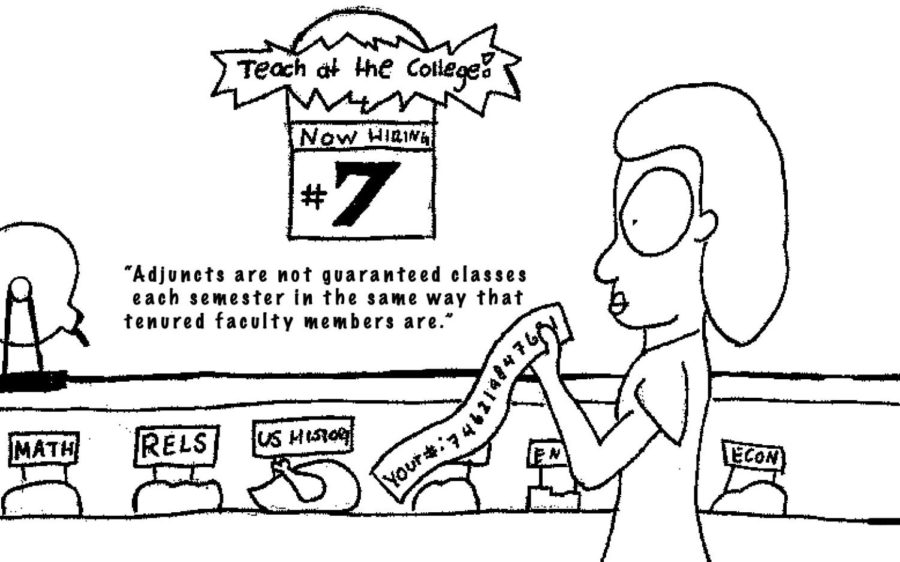 Not only do adjunct instructors sacrifice much of their personal lives to commute or make time for students, their positions are also largely at risk when schools make budget cuts.

John Smith, a Santa Rosa Junior College mathematics instructor, is a “Freeway Flyer.” He is an adjunct professor who teaches at not one, but three colleges each semester — SRJC, Diablo Valley College and Solano Community College — all while living in San Francisco.

It’s his dreaded daily commute and the several college-specific parking placards on his windshield that earns Smith the “Freeway Flyer” nickname.

So why would a college professor need to commute to three college campuses? Because like many college-level instructors at SRJC, Smith is an adjunct, or part-time, instructor.

In 2011 the American Federation of Teachers reported that 60 percent of faculty in the U.S. were adjunct; since then the number has risen to 75 percent.

Adjunct instructors teach on a limited-term contract, often for one semester at a time, without the security and benefits of a full-time position or, eventually, tenure.

Tenured positions, which enjoy a different level of job security, originated so professors could do long term research without losing their job instructors.

Santa Rosa Junior College “Our House” coordinator Amanda Morrison taught for five years as an adjunct professor at colleges such as University of California, Davis and Diablo Valley College. One struggle she faced was commuting to and from different colleges.

“There were some semesters where I wouldn’t get enough classes to even sustain to pay rent. One time I had to commute from Santa Rosa to UC Davis twice a week to teach, which really cuts into your lifestyle,”  Morrison said.

“Adjuncts also don’t receive the same full medical insurance benefits that full-timers get. Becoming tenured faculty is a difficult process that could take years because there is competition for each position and a lengthy hiring process,” Morrison added.

Smith, like Morrison, also has struggled financially as an adjunct.

“I really like teaching and working with young people. The pay sucks so it’s not really worth it, aside from the fact I get to do what I want,” Smith said.

He shared how it can get tiring and at times he questions how much longer he would do it. When Smith started working at SRJC, he taught three classes per semester, but this semester the college dropped him down to two, and in the Spring of 2019, he was only offered one class as the school downsizes.

“For Spring 2019, they reduced class size by nine percent, and that entirely hits adjunct faculty,”  Smith said. “In terms of reducing the size of the college, I am definitely one of those people hit by that.”

Karen Cornwell has been an adjunct communications studies professor at SRJC for 20 years and believes it is a difficult process because there’s no job security.

“We are the last on the totem pole,” Cornwell said. “Since we are first to go, there is a sense of insecurity.”

Cornwell, a single mother, has had to work as many as three jobs to support her family due to the lack of classes she has been assigned. With no teaching opportunities during the summer she works as a flight attendant for a private jet company to supplement her income.

“I’ve never been guaranteed a job and I don’t expect one,” Cornwell said. “When you see the schedule get cut, that means our jobs are going away.”

In an educational blog post from the University of Portland, most colleges see the roles of adjunct professors continually expand in education, due to ever-tightening budgets and many qualified applicants for relatively few jobs.

Also, adjuncts don’t have their own office space to meet with students, so finding office hours can be a challenge. And with the reduction of class schedules, it will be harder for students to fit into a desired-instructor’s course.

“My Math 155 instructor was nice because even though we didn’t have office hours, she gave us her number so we could text her if we had a question,” SRJC student Jimmy Novella, 21, said. “Also, she would end class half an hour early so anyone who had a questions could stay those extra 30 minutes to ask for help.”

“Instructors have a huge impact on our academic and life experiences,” she said. “When an adjunct faculty member is highly noted and selected by students, it causes distress because you want to be in their class so bad, but their classes [and] spots are so limited.”

Adjuncts are not guaranteed classes each semester in the same way that tenured faculty members are.

“It’s sad that this is what’s going on because many of these teachers are some of my favorite to learn from. Their limited classes is what sucks,” said SRJC student Priscilla Navas, 18.

Students have expressed frustration, in how this can challenge electing their courses.

“I was looking forward to taking a communications course with an instructor to find out they are only teaching the class I already took, because her classes got cut down,” said Leslie Gonzaleza, a 20-year-old SRJC student.

If adjunct professors are seeing less opportunities for teaching, then how has the number of adjunct faculty risen — and the number of tenured positions declined?

Adjuncts like Smith and Morrison have applied for a tenure position but explained that the process isn’t as easy as it may seem.

“As soon as one position opens up, everyone rushes to try to get it and the chairs of the department sit there and just go through dozens of applications narrowing it down to two instructors to make their final decision,” Morrison said.

Morrison will be going back to teaching in the Spring 2019 as adjunct faculty in Sonoma State.