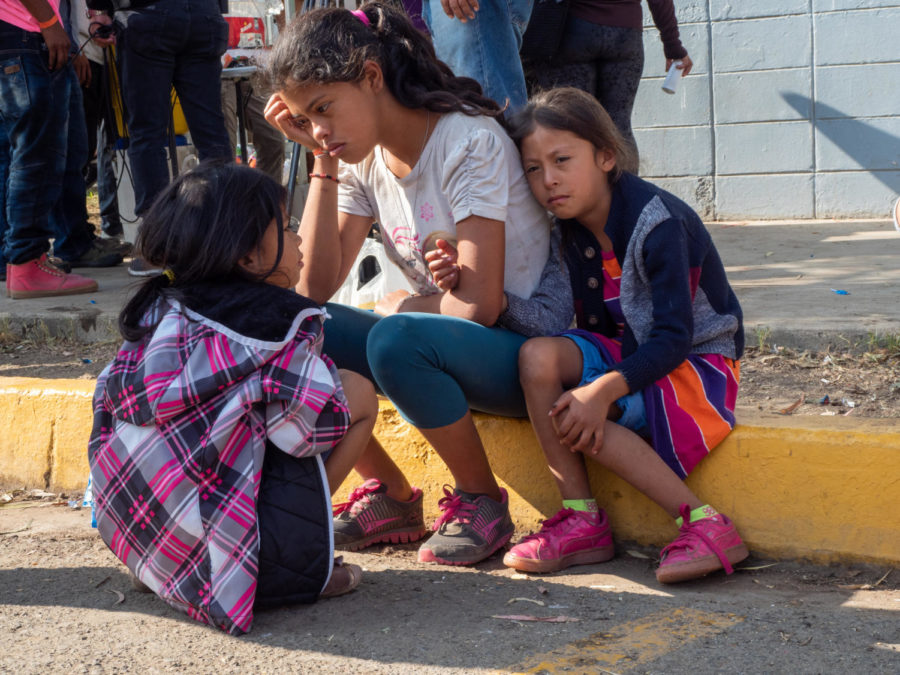 Santa Rosa Junior College student Joshua Torres saw a tractor-trailer arrive and start to unload passengers. The container had been modified to hold a second deck of people, and he counted around 75 climb out of the truck. They had come to Tijuana from Mexicali, more than 90 miles away, in the back of a metal shipping container with only one door open to let air in.

He watched as hundreds of migrants unloaded from buses, cars and more trucks like the one he described. “Every 10 or 15 minutes another 100 or 200 people kept coming in.”

Torres, 26, left Santa Rosa the evening of Nov. 19 at 5 p.m. on a Greyhound bus to San Diego, embarking on a 12-hour trip with one goal in mind: find the “migrant caravan.”

Torres was drawn to the mass emigration, which made national news after President Trump ordered more than 5000 Army Corps of Engineers personnel to the Mexican border to assist in fortifications in early November. Made up of roughly 7,000 Central Americans, the migrant caravan has made its way, mostly on foot throughout southern and central Mexico, arriving to Tijuana at the end of November.

Tensions came to a head when a large group splintered off from a peaceful protest and  attempted to cross the fence near the San Ysidro Crossing on Nov. 25, but were driven back when U.S. Customs and Border Protection officials released tear gas. Traffic at the border was subsequently closed in both directions. Mexican officials arrested 39 and threatened to deport violent offenders.

Torres missed the tear gas incident but was on hand to see groups of migrants arrive by bus, car, truck and foot to seek asylum in the United States.

Torres’ interest in immigration issues springs from his parents, both legal immigrants from El Salvador and Nicaragua. “I’m familiar with the culture down there,” he said. “When I heard a lot of people were coming up for gang-related reasons, or work-related reasons, I totally understood.”

Torres started taking pictures with his father’s camera when he was 13 and had an internship with a fine art portrait photographer in Petaluma. High school ended, and his interests drifted; he even skateboarded professionally. He eventually took up his camera again.

“As I got older I was drawn to it again,” Torres said. “I just don’t think I’ll put it down this time.”

His hobby has given him new meaning the second time around, and he wants to use his camera to document important events like these. “In a situation like that, you’re able to get photographs that are unique,” he said.

Crossing the Mexican-American border on his skateboard, Torres searched Tijuana for arriving groups of migrants.

“When I was trying to figure out where [the migrant groups were], you could tell by their body language that [the locals] didn’t want to talk about it and didn’t want anything to do with it,” Torres said.

Skating to a small town on the outskirts of Tijuana, he found a baseball stadium full of people, with more buses and trucks arriving by the hour.

“It seemed pretty tense. There were a lot of children, a lot of men around my age,” Torres said. “The majority of people there were just looking for answers.”

Tijuanans donated food, water and clothing, but he didn’t see many charities or government organizations other than Mexican police and military to deal with the incoming tide of people.

“They couldn’t keep up with the amount of people they needed to feed. They couldn’t cook the food fast enough,” he said.

Torres saw one of the refugees call out a military officer who handed a bottle of water to another soldier. “Immediately one of the guys from the caravan was like, ‘How can you give this guy water but you see women and children here and you can’t give them water?’”

Earlier that day Torres watched three young girls who were left alone when their mother and friends went to buy food the night before. They didn’t return, and the girls’ family doesn’t know what happened to them. Torres snapped a picture of the three sitting on a curb, crying and embracing each other. They, like so many others, had run out of food and water, with no tangible plan on the horizon.

Young people making the trip stood out in the crowds. “I talked to kids there, between the ages of 13 and 15, and I asked them if they were alone, and all of the ones I talked to said ‘Yeah’,” Torres said.

“They didn’t start the caravan alone, but they would get separated.”

Families split up, planning to meet up at the border, but swirling rumors warned of deportations and kidnappings.

After three days, Joshua caught a Greyhound bus back north. Having left Sonoma County with no real background in journalism, Torres returned with around 200 photos of an international humanitarian crisis.

“Seeing people actually run out of food, [without] water, people who were actually hungry, you know real hunger, and just the desperation in people’s faces,” he said with a somber face.

“Having the ability to skate over the border, to come and go as I please makes me feel a little guilty.”

While he was in Tijuana, he rationalized being there and not helping.“I’m documenting, so I have to keep telling myself that’s what I’m doing.”