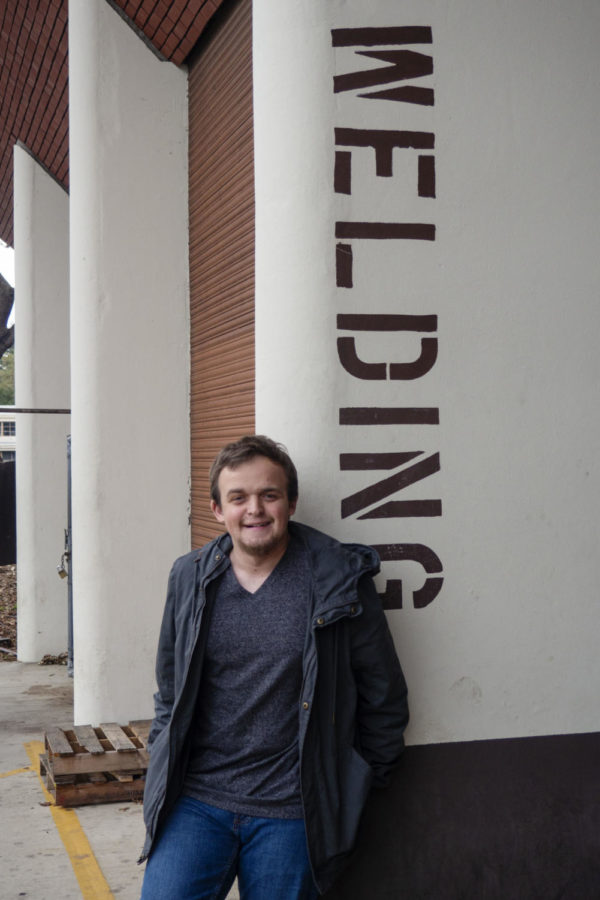 Brent Woods balances his major's 3D design and animation coursework with his welding classes while taking care of his post-fire PTSD.

He flips down his welding helmet and focuses on the task at hand. The air around him feels thick, the heat in the classroom oppressive from his latest assignment. He lights his torch and watches a flame dance from its tip, a flame he’ll use to melt multiple metals during his latest welding class.

But his concentration breaks; he’s no longer present in his Santa Rosa Junior College classroom. Instead, Brent Woods is back in Coffey Park, back behind the wheel of his car with his pets quaking in the backseat, back to fleeing last year’s wildfires. His hands are white-knuckling the steering wheel; he smells the smoke of melting powerline transformers. Huge flames chew at the roadside.

Woods panics, and he flashes back.

“During that time,” Woods said, recalling his harrowing drive to safety, “I kind of decided that this is how it ends for me, that this is the way I would die.”

Woods is a 19-year-old SRJC student, and he is not alone in his trauma. Last year’s wildfires affected students deeply and continue to do so, in ways that are visible on campus across a continuum of symptoms.

For Woods, it’s flashbacks and panic. For others, it’s anxiety or depression. Some can’t concentrate. Some can’t sleep. Some look toward any cloudy sky with trepidation.

Dr. Bert Epstein, manager of Student Psychological Services (SPS), attests there’s a “gamut of reactions.” Last year he and his staff saw more students take advantage of SPS services, an increase he attributes to the fires and one he doesn’t see reversing in the future.

“There’ve been issues of loss; there’s been issues of trauma,” Epstein said. “[Students] might be experiencing not the same level of terror or anxiety or fear that occured at the time, but some echo of that.”

“I stepped outside this afternoon and it smells exactly like it did a year ago,” Rivinius said, speaking in mid-November about the smoke and ash settling over Santa Rosa from the Camp Fire. “I’m a little bit worried. The last time, [the fires] were just jumping all over the place, so you never know what could happen, especially with the wind.”

Rivinius is not the only one who feels a sense of impending doom.

Sara Stoxen is a 21-year-old nursing major who works 15 hours a week at the PEERS Coalition, a group seeking to change the culture of mental health on campus. Her role connects her with students to discuss stress, anxiety, depression and sleep difficulties; she also shares appropriate self-care strategies and resources for support. Both touchpoints render Stoxen acutely sensitive to the vibe around her.

“The overall somber mood I’ve noticed has carried on. [Students] just have this heaviness,” she said. “California has been on fire for months and months, and everyone feels it because of what we’ve been through. People carry that weight.”

It’s a weight that rests so heavily on students like Woods and Rivinius, it affects their daily lives.

When Woods is in class, “the smell mixed with the heat, it’s on the same level as when I was in the car. I will occasionally have to put down my welding torch,” he said, admitting he’ll “go sit down for a good five to 10 minutes just get a level head back.”

Unlike Woods, Rivinius did not have an intense experience last year, but the residual effects haunted her enough this week she took extra time to change her morning routine. “I was fine last year — I was safe — but just the fact that it’s happening again, I packed my bags.”

Even Stoxen, the PEERS member who counsels other students, isn’t immune. “Right when I came out of my class last Thursday I looked up and I was like, ‘Oh, where is that?’” she said. “I was so focused on ‘I need to find out where this fire is,’ and ‘I need to reach out to people that I love.’”

Understanding this type of variation and nuance in students’ overall mental health and coping ability prompted SRJC to participate in the National College Health Association’s triennial survey. The survey collects data about students’ mental health habits, behaviors and perceptions directly from students themselves and aggregates the data so campuses across the U.S. can compare and contrast results and trends.

According to Stoxen, the survey asks students to report which factors negatively impact their individual academic performance. In the most recent survey conducted, during the Spring 2016 semester, 33 percent of students self-reported stress as their No. 1 issue, followed by anxiety, sleep difficulties and depression.

One “pretty alarming” metric for Stoxen was the 80 percent of students who affirmed they “frequently feel so overwhelmed [they] don’t know what to do,” she said.

Stoxen is eager to evaluate data from the next survey because it will encompass student feedback for the period spanning both last year’s fires and the fallout from the more recent disaster in Butte County.

The survey results will then be compared with previous years’ and will indicate any changes to the student body’s mental health status. The results will also allow SRJC to evaluate on-campus programs designed to help students cope with their symptoms and recover from chronic maladies such as PTSD.

One on-campus program is already working to decrease students’ anxiety and stress while improving their focus, memory and overall health.

SRJC’s Monday Mindfulness Meetups offer an on-campus silent space for reflection, meditation and prayer. Their goal is to help students perform better academically and personally by giving students “an opportunity to meditate or do something that discounts all the stresses and turns it off for a while,” said the group’s coordinator, Adjunct Professor Rev. Michael Ludder.

Each week’s Mindfulness Meetup is designed to expose students to a different approach to meditation and de-stress practices in the hopes each student will find an effective technique.

At each session, held from 2-4 p.m. Mondays in Bertolini’s First Floor Staff Lounge, a different presenter will introduce and demonstrate her technique, then lead participants through the appropriate exercise.

“I see this as giving to yourself, and most people just sort of ignore that,” Ludder said. “If you get into some kind of practice, you’re letting go of things [that get] in the way of seeing yourself or being yourself.”

It appears Woods agrees with this philosophy about meditation practice, even though he doesn’t attend formal therapy or mindfulness sessions, and he doesn’t identify with meditation because he doesn’t see a spiritual component to the method he uses to cope with his self-diagnosed PTSD.

“It’s more of just — I’ve found a way to find my center,” he said. “I kind of close my eyes and picture myself falling [through] an endless tube that I can’t see the bottom of, and I can no longer see the top. But just, falling.”

The visualization puts him in a vacuum, a place without noise or temperature or scent, without the fires’ roar and heat and stench. It’s as if he enters the eye of a storm, having passed through one side of its terrors to the somehow perfect void created by the storm’s relentless pressure.

was trapped for about two hours. It was that moment of not knowing when it was going to end.”

“He has the stimulus of the fire, all those things. Your brain learns that. What meditation does is quiet all that down — whatever form of meditation you use,” Ludder said. “It just quiets that system down so you start getting what is yours rather than this automatic response in your brain.”

Woods doesn’t visualize what happens when he exits the eye of the storm or when he eventually stops falling through his endless tube. He doesn’t know whether he’ll cross the storm’s violent other side or feel the hard stop that awaits at the end of a fall.

But he doesn’t worry about that. He clings to a sort of beauty in the experience. “There’s a certain level of tranquility to chaos,” he said. “It’s accepting that certain things are out of your control and at that point, it’s not up to you.”

Woods uses this peace to cope. He gets up in the morning, attends class and continues to work towards his major in 3D design and animation, still taking his welding classes on the side.

“Find whatever brings you inner peace,” he suggests to other students who struggle like he does. “Find something to occupy yourself because if you’re not occupying yourself, your mind will go to the places you least want it to.”