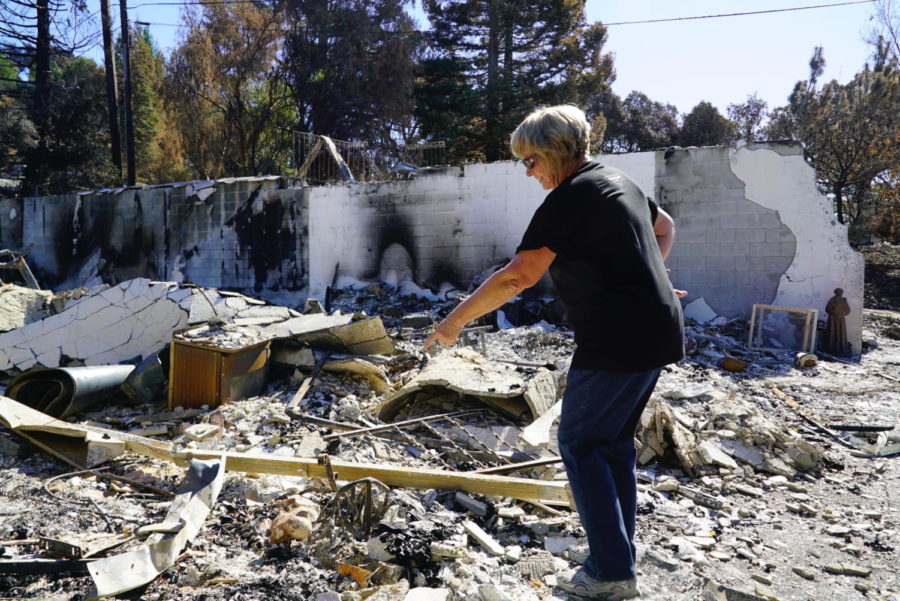 Tyra Benoit identifies bits of her belongings in the ash heap that was her home.

Lauren A. Spates and Zena Bounsall

Photographs captured the fires’ unsparing destruction: suburban homes reduced to dust, cars twisted into metal frames teetering on broken axles, smoke still rising from the ash heaps. Readers from around the world marveled at the horror and devastation; they wondered how Santa Rosa residents would carry on after losing their greatest assets.

But Santa Rosans’ most difficult task was not surviving without homes or cars; their most profound loss is not quantified in those photographs. Instead, the loss that feeds residents’ deepest grief and represents the greatest challenge to their forward progress is hidden from the casual observer.

It is the loss of their identities.

“When I would look at my library it was like the journey of my life,” said Tyra Benoit, 69-year-old Santa Rosa resident and former dean of arts, communication studies, social and behavioral sciences at Santa Rosa Junior College. Benoit (pronounced ben-WAH) spent her career teaching about ancient civilizations. She escaped the fire with her husband, their cat and the items they could grab in the 15 minutes before flames engulfed their Wikiup home.

The library of obscure journals and out-of-print books she built during 40 years of collecting and traveling couldn’t make the cut.

And now every volume is gone.

“You talk about losing a house, and that’s dreadful. And people say, ‘Oh, it’s just stuff,’” she said. “And the furniture, the house, the appliances, those kinds of things are just stuff, but it’s the other things — the personal things — that do form your identity.”

SRJC student Chelsea Connor understands. Like many Glen Ellen residents, Connors lost her home and all her belongings in the fires.

“A lot of people who didn’t lose everything would say ‘Well, on the bright side you get all new stuff,’” she said. “I know they were trying to be positive, but it always made me feel worse because I didn’t wanna’ be a blank canvas.”

While Connors’s losses were less academic that Benoit’s, they were no less important to her self-image. Her morning ritual of applying professional-grade beauty products was altered when her makeup case and its contents were reduced to ash. For the first time, she had to face the world bare-faced.

“It’s hard to not feel completely lost without the comfort of your things and your routine,” Connors said.

That disorientation reaches outside the boundaries of the present and deep into the past. A devoted Golden State Warriors fan, Connors lost all her team gear, including T-shirts and jerseys that defined not only her fandom and allegiance, but also the depth of her Bay Area roots.

For Benoit, the loss of her own “precious things” severed the timeline of her life.

She used to treasure a pair of tiny plaster handprints her twin sons stamped for her 36 years ago, but they burned with the rest of her belongings, and now Benoit feels detached from the experience of motherhood, despite having lived it. There is a disconnect, a void, between the years she spent as a mother and the proof she possesses from that period.

Benoit also feels less connected to her ancestors. Two tubs of generations-old photographs remained in her garage to burn; a later trip to her ancestral homeland felt fruitless without having those inherited photos in-hand to validate her heritage.

This sense of lost memories, of lost history, of lost family identity — it doesn’t just live in the past. It affects these residents’ futures.

“Right after the fires the director at Sonoma State called up and said, ‘Can I count on you to put your application in to teach again?’” Benoit said.

During her long career, Benoit earned multiple Fulbright Scholarships and Grants from the National Endowment for Humanities, in addition to an award for her work fostering freedom of expression at SRJC. There was plenty of opportunity for Benoit to continue in her field, but she thought it was time to move on.

“I told [the director], ‘I’m really sorry, but all my books are gone, and I think it would just be so difficult for me,” Benoit said. “So I never reapplied, and I haven’t taught a class since.”

Connors admits it took a while to even start shopping for new things. “I didn’t want anything or value [new things] as much.” Despite the fires being a year in the past, the SRJC student admits she still hasn’t recreated her style.

While each survivor’s self-image has shifted since the fires — with Benoit’s distancing herself from her professional identity and Connors’ struggling with her personal look — their new outlook on life might be the greatest adjustment of all.

“I thought I would have a hard time without all these things, but in the days following the fire, all your values change,” Connors said. “I think I wore the same clothes I [escaped] in that night for about three days because [changing] hadn’t even crossed my mind.”

Perhaps because of Benoit’s life’s work as a lecturer on other civilizations, her post-loss perspective shifted through a cultural lens. She spoke of “people in other parts of the world who have to struggle or who are refugees”; she thought of the Central Americans caravaning north to the U.S. border and the Syrians attempting to escape their war-torn lands.

“I had a totally newfound appreciation for what they have gone through and what homeless people in our own community go through,” she said. “I had always supported them financially or empathized with them, but I never felt [it] on a gut level. I woke up the day after the fire and I was like, I’m homeless. I don’t have a home.”

The shock and pain of her new reality was clear, but there was a buoyancy to her voice, too.

“It’s heavy,” she said of the weight these thoughts press upon her mind. “But I consider [them] a gift in a sense because if more people experienced this then perhaps we would have more empathy in the world today. I think there’s a lot of people that just don’t understand. I understand it a lot more deeply than I ever expected to.”

Since the fires, Benoit and Connors both reassessed their values and gained a new perspective on loss and life, and they both view these changes as positive. But challenges remain as they attempt to rebuild their redefined identities piece by piece, possession by possession.

“We looked at a replacement home this weekend, and there was this incredible library,” Benoit said, her voice exhibiting a light-heartedness that was absent before.

“There was this room that had all these bookshelves and everything, and I could immediately feel myself just relax when I walked in there.”

For Benoit, the rebuilding — and ultimately her recovery — will come, eventually, book by book.