“All that education for nothing”: One reporter recounts his path to the Pulitzer 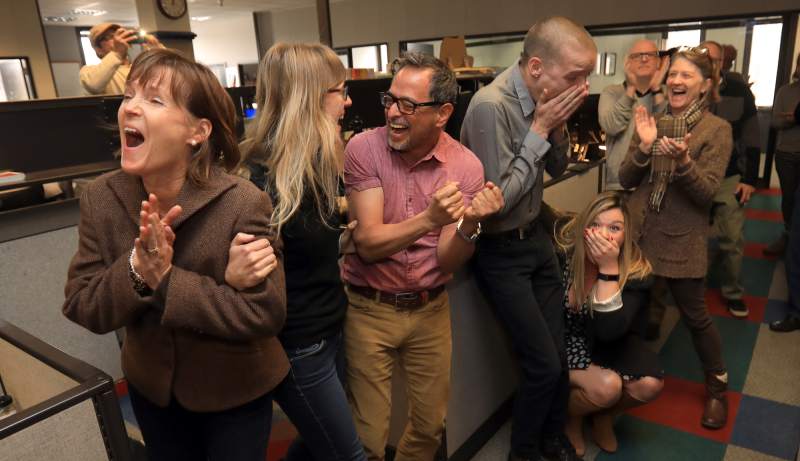 When your true profession calls, you must go. So says a Pulitzer Prize-winning journalist and former mechanical engineer who felt the call of the written word so strongly he quit a lucrative, well-defined career path for the underpaid and unpredictable world of freelance writing.

Martin Espinoza was awarded American journalism’s highest honor this past April as part of the Press Democrat’s comprehensive coverage of Santa Rosa’s 2017 wildfires, and he sat down with Santa Rosa Junior College journalism students Oct. 9 to explain how he made the switch 27 years ago from drafting water systems to drafting articles.

“I knew since I was in high school that I would write,” Espinoza said, divulging how his younger self thought his career would unfold. “I thought that I would get an engineering degree, that I would become an engineer; that I would make a lot of money and then I would go home and write novels.”

His mother approved of this initial plan.

Espinoza, 54, grew up the ninth of 10 children in a Mexican-American family in Alkali Flat, Sacramento. His talent for science and math propelled him to college as the only one of his siblings to earn a degree.

“I grew up pretty much dirt poor, so education was the way to get out of that for me,” he said.

Yet despite childhood deprivation, Espinoza told of a home filled with books and musical instruments—even if they were often broken. In middle school, one of his older brothers brought home a few poetry assignments, and they left a lasting impression on Espinoza.

“[He] was using big words, I think he might have been using a thesaurus, but I was impressed,” he said. “I saw how excited he was and how it touched something in him, some creative part of him, and I liked that dynamic.”

In high school, the band “Rush” and its drummer Neil Peart captured Espinoza’s imagination with its sci-fi-influenced genre-jumping sound while John Steinbeck’s “The Grapes of Wrath” brought Espinoza back to earth by illustrating real life, or what Espinoza called “the universal experience,” a story about one family’s attempt at carving an identity while seeking their future.

But it wasn’t his foundational love of the arts that led Espinoza out of Alkali Flat.

Thanks to his knack with numbers, he graduated from Sacramento State University in 1998 with a degree in mechanical engineering and then landed a job as a project manager for a water company in Northern Sacramento. After a period of doing “the most boring job I ever had,” Espinoza signed up for graduate-level coursework thinking the advanced degree would revitalize his engineering career.

But he was miserable.

At this point, his childhood love of reading and his teenage enjoyment of music had matured into a deep appreciation for literature and a fondness for well-developed rhythm, neither of which he could employ while reviewing water system plans.

Espinoza wanted to connect with the people around him. He needed to create, to string together language the way a drummer strings together the beat. Writing called. When his mother heard of his decision to leave engineering, she ruefully criticized her son.

“Toda esta educación para nada,” she said. All that education for nothing.

“Journalism—there was just something about it that I immediately latched onto and it was the fact that my name was in print. I like the byline,” he said with a delicate, almost uncomfortable chuckle.

Espinoza is a contemplative soul and seemed surprised by his own expression of vanity, perhaps because it is not his own story he wishes to tell.

On one of his most memorable early assignments for the San Francisco Bay Guardian, Espinoza interviewed César Chávez, the iconic civil rights agitator and labor organizer.

“I remember [Chávez] coming out of an old late-model American car,” he said. “I remember him wearing tennis shoes, like running shoes, jeans and kind of a sweater vest, and when I went up to him to interview him, he just kind of looked at me like I was from Mars.”

Chávez was surprised to see the Bay Guardian hired a Latino reporter, and the two men sat together on the curb for a bit, chatting and connecting over Sacramento and Espinoza’s good fortune.

Espinoza views his hiring and this early interaction with Chávez as foreshadowing his later success at the Press Democrat.

“[Being Latino] has been my advantage all the time,” he said. “I’m bilingual and bicultural, and I’m constantly sent out to cover stories that others wouldn’t be able to unless they spoke Spanish.”

He’s also empathic, thoughtful and sensitive, traits that shone through during his time with the SRJC journalism class.

“I felt he was authentic, with depth, and presented himself as a human, more than just a journalist,” said Edward Gathercole, 33.

Another student, 19-year-old Jordan Brewer, said he “really felt [Espinoza] was passionate for his profession, and he was in love with what he was doing.”

A few years ago, Espinoza was sent to cover the drowning of a 3-year-old. He heard crying as he approached the boy’s home and waited to speak with his mother.

“The family was grieving and you don’t want an interpreter there,” he said. “The advantage you have when you go in to a family and you speak their language….” Espinoza’s voice trailed off, unsure which words could convey such a heavy situation.

Words come easier to him on paper, particularly as the Press Democrat’s healthcare reporter who also covers tangential stories on immigration, demographics and the census, topics that leverage his proven math-mindedness, but keep him firmly employed as a writer.

And words flowed freely during last year’s wildfires when he and the rest of the Press Democrat tracked the devastation. It was the kind of work that earned his mother’s approval and ultimately won him the Pulitzer.

But it was also the kind of work Espinoza sought throughout his life: to find the relatable, to tap into the emotional and to relay the personal to the public.

“If I was an engineer, I would never ever be able to connect with people on that level,” he said firmly. “Ever.”