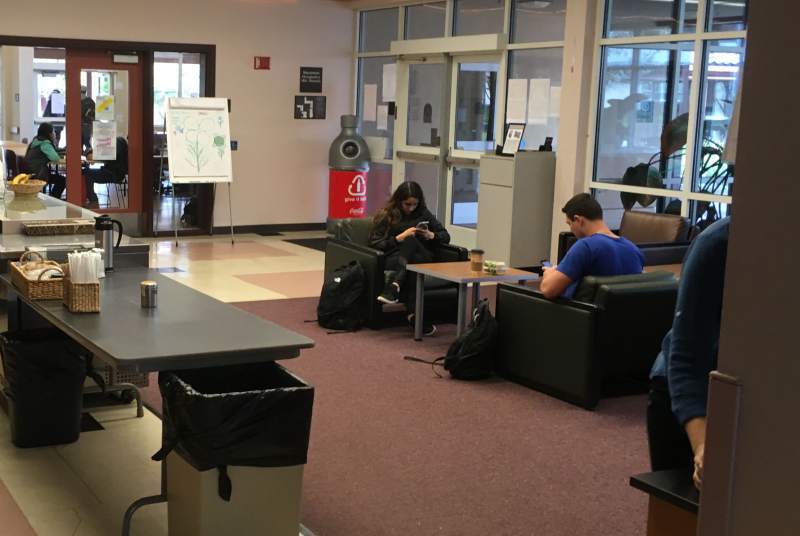 Four students sit slouched on a pair of reddish-brown leather couches parked to the side of the Petaluma campus cafeteria, their eyes squinted in focus on two flat-panel TVs. The delicate jingles of two video games cut through the sizzle of hamburgers on the grill and the murmur of other students doing homework.

Unlike most students in the cafeteria, these four aren’t in the cafeteria to eat or study. They’re members of the Petaluma Games Club, and they’re here to play a variety of games between class.

The Petaluma Games Club, formerly known as Petaluma’s E-Gaming Club, is a free club created to put together a video game community for casual and competitive gamers. With newly released games in addition to the classics, members play “Mario Kart 8” and “Fortnite” along with “Dungeons and Dragons,” “Super Smash Brothers” and chess.

Students don’t have to be club members to enjoy the facility. Any student can use the club’s resources to play PlayStation 4s anytime during the cafeteria’s service hours from 7 a.m. to 8 p.m. Monday through Thursday and 7 a.m. to 2 p.m. Friday.

“We use the PS4’s that are available on campus,” Max Martin, 21-year-old club president, said. “We also bring Nintendo Switch consoles, on occasion people have brought their own GameCubes and Wii’s to play versions of Super Smash Brothers.”

According to Martin, the club currently has 12 to 15 members and competes only on campus.

“So far we haven’t done anything outside of campus. When it comes to the on campus tournaments, we like to lean it more towards casual, as it’s more about having fun and making friends,” Martin said. “A fair amount of students who are not involved with the club show up to the tournaments just to play the games they love with like-minded people.”

The August shooting at a Jacksonville video game tournament doesn’t affect whether they would compete off-campus or watch tournaments in other cities.

“I have never really been interested in competing in tournaments, but I would still go to tournaments to watch regardless of the potential risks,” Martin said. “I was disappointed by the shooting as it gives the already suspicious media more reason to fear monger about video games.”

Toni Bacigalupa, the club’s advisor, reflected on the tragedy and thought it was important to not let the shooting discourage the video game community.

“The Jacksonville Shooting was a tragedy, and I think it’s important to recognize that shootings are rare occurrences — though not as rare as we’d like — and that it’s important to not give into the culture of fear that is left in the wake of a shooting,” Bacigalupa said. “Tournaments provide a great opportunity for students and friends to come together, participate in friendly competition, and create a strong community that stands together.”

The club was created in the summer of 2016 by two SRJC students Miguel Diaz and Alex Spangler, 27. Spangler took the role of club president for the first term.

“We submitted a proposal for creating a game room that students could relax in and, surprisingly, it got approved,” Spangler said. “We were given a budget to gather the necessary equipment and put together the gaming lounge that sits in the campus cafeteria today.”

The club hosts tournaments and sells snacks to generate funds for its budget. Any revenue raised “could be used to plan even bigger tournaments and events,” according to Spangler.

He said it wasn’t difficult to grow membership, even at the beginning.

“All I had to do was go into the gaming lounge, see if anyone was playing, and then ask them if they were interested in joining,” he said. “I’d get their name, email, and some games they liked to play, and ‘viola,’ a new member.”

Once the club was started, students were able to compete on campus, on club-provided games including “Overwatch,” “Street Fighter V,” “Minecraft” and the “Mega Man Legacy Collection.”

But employment opportunities presented themselves to Spangler, and he decided to leave school. Now he works as a quality assurance tester at the game development studio Toys for Bob in Novato.

The club is still going strong under the advisement of Bacigalupa, coordinator of Petaluma Student Resource Center, and Martin, a mechanical engineering major, who have grown the club during their time in charge.

“The Petaluma Games Club combined to become one club with the Boarding Gaming Club and is a great group of friends coming together to play games that they like whether it be board games, card games or video games,” Bacigalupa said.