Behind the yellow tape with Robert Brownlee 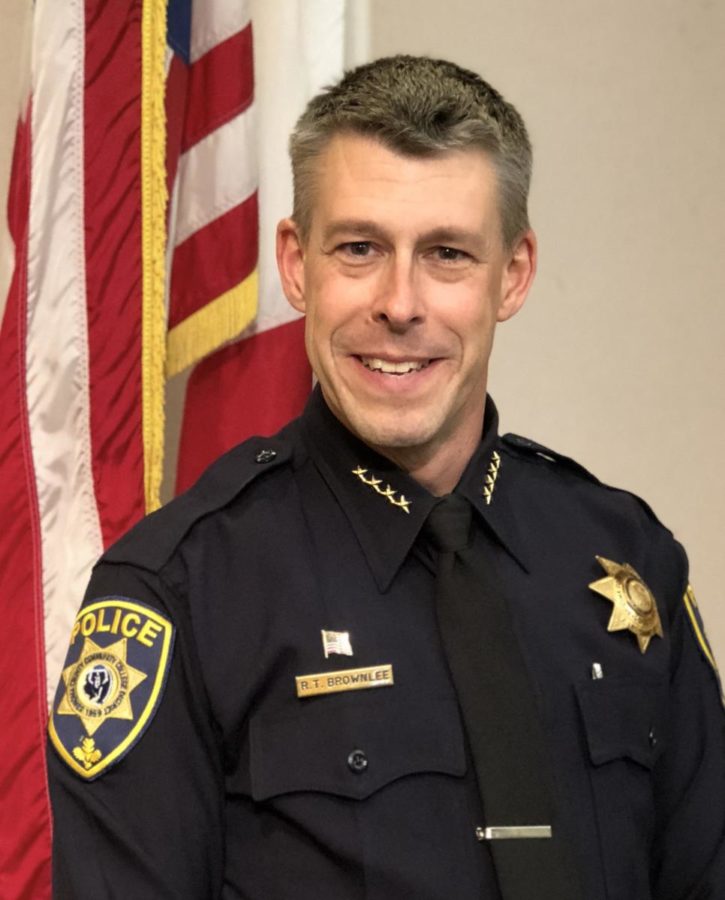 As a kid, Robert Brownlee used to roam his neighborhood to arrange pick-up basketball and baseball games. Forty years later, Brownlee still roams his neighborhood, but now he’s on a mission to help the public.

A member of the Santa Rosa Junior College District Police force for the past 13 years, Brownlee was sworn in to the role of police chief on Aug. 2.

“Robert Brownlee is a seasoned law enforcement officer with a strong commitment to ensuring the safety of our students, faculty, and staff. He is a great listener and always aspiring to improve public safety on campus,” SRJC President Frank Chong said.

“Robert Brownlee is a great human being,” said Officer Vincent Neuman, “He has worked nearly every position here at SRJC District Police and is deeply committed to the well-being of SRJC. He is compassionate, thoughtful and trustworthy. He will be a great chief of police for us here at SRJC.”

During his tenure as lieutenant, Brownlee witnessed major changes in the department; as chief, he’s eager to continue the trend.

“I think the biggest change — and it hasn’t happened overnight — is that we’ve become a more professional organization,” Brownlee said.

SRJC students are likely to wonder what Brownlee means by “professional” and how the changes he’s seen and those he wants to implement will impact student safety on campus.

According to Brownlee, the police department is now using a new emergency notification system called Regroup, in addition to Nixle, in response to last October’s sexual assault of a woman in a vacant SRJC stairwell. Although the student reported the assault to police around 9 a.m. that same day, authorities failed to report the incident through Nixle and the campus alert system for two weeks.

“All students are automatically enrolled into [Regroup],” Brownlee said, “so if we ever have — God forbid — an active shooter situation, we’re gonna use this system to send out a text. It’s very quick and very dynamic.”

But this is not his only area of concern. Ensuring his officers are prepared for any number of situations is of the utmost importance to him.

“We have mandated training by the state and by the legislature, so, in a two-year cycle, our officers have to go through emergency driving training, a range course and first aid. There’s a slew of training that’s built in,” Brownlee said. “I want to go above and beyond that, so that our officers get specialized training and can handle anything that comes their way.”

“I like to consider myself a fair person, a reasonable person, and I have an expectation of my officers to enforce the law fairly, and not to discriminate,” Brownlee said. “I know my officers, I know my dispatchers, I know my community service officers and I haven’t seen them treat anybody unfairly. I’ve seen them treat people that they arrest with dignity and respect. I’ve seen my officers come back to the station, grab the sandwich that they made for lunch, and take it out to someone who is homeless.”

But Brownlee does acknowledge that not all community members are comfortable interacting with police.

“There’s an intimidation with law enforcement,” he said. We have a stigma that we’re the stoic figures, that you can’t approach us.”

He counteracts this stigma by reaching out to the community.

At the last SRJC Welcome Day, student cadets were giving away cotton candy and trying to recruit students. “At the end of the day, it’s all about relationships, and it’s making those connections through those conversations,” Brownlee said.

Sgt. Steven Potter said relationships are a core element of Brownlee’s leadership style. “I’ve always recognized some innate qualities in him that prove him to be a natural leader, one who values relationships and draws people in so they want to follow him.”

And although Brownlee admits the relationship between police and community is not always harmonious, his daily mission as chief of police is to make sure everybody gets home safely.

“As a freshman in high school, I was one of those kids who got picked on, and I remember those days well,” Brownlee said. “I think that’s why I chose a law enforcement profession, because I want to help people. That’s what I’m all about.”

Born and raised in Scranton, Pennsylvania, Brownlee left home after high school to join the United States Coast Guard. “At 18 years old, I had a desire to see a little bit more than my hometown,” Brownlee said.

He was stationed in Alameda on a high-endurance cutter, a 378-foot ship whose primary duties were law enforcement and search and rescue. “We did many patrols around Alaska in the Bering Sea to protect the United States fishing areas,” Brownlee said. “I got to see Alaska, Seattle and San Diego, and I liked it down here. I fell in love with the Bay Area.”

After his experience in the Coast Guard, Brownlee joined the California Highway Patrol for five years before earning his bachelor’s of science in organizational behavior and leadership from the University of San Francisco in 2008 at age 35.

“I was part of [the University of San Francisco’s] cohort program, and from there I came here to the Junior College. I made my way up the ranks and was recently given the honor and privilege to become the latest chief of police.”

Outside of work, Brownlee enjoys spending time with family and friends, often over local wines or beers. He is passionate about food and likes both going out to eat and learning new recipes at home.

But perhaps most importantly for SRJC, Brownlee is still focused on cultivating his community, just as he was as a kid on the baseball diamonds of Pennsylvania.