Santa Rosa Junior College trash: Where it goes and where it’s headed 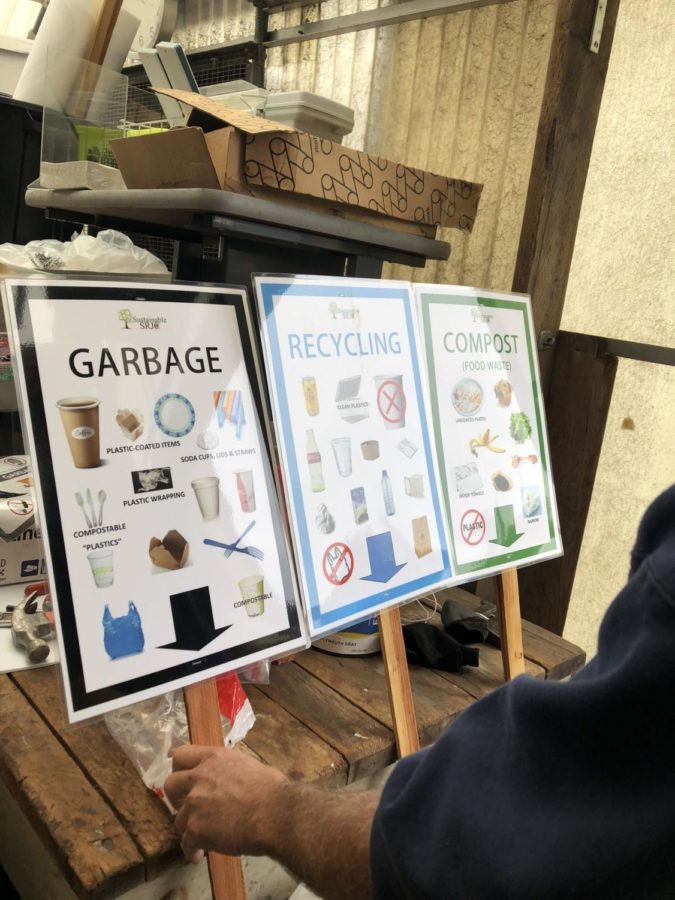 In addition to processing all campus waste after it lands in trash cans, Tillotson’s team manages the resale of scrap metal, handle compost for the SRJC culinary program and the servicing of campus recycling bins. He has bigger concerns too, including informing students on how to put the right trash in the right bin and minimizing waste overall.

It’s all part of SRJC’s evolution into a greener campus and the college’s plan to achieve zero waste status in the future.

“There’s more to my position than just taking things out to the dumpster,” Tillotson said.

One of his biggest efforts is helping students choose the correct can for their garbage, a critical moment in the waste chain. Making the right choice leads directly to a cleaner earth.

“That involves making sure containers go in the right places, we have proper signage for the bins,” Tillotson said.

His efforts are well-recognized on campus, even if he isn’t.

“I’ve never not found a recycling bin when I needed one,” said Riley Craig, an SRJC Theater major. But he brings up an important issue: education on waste management. “Knowing

Tillotson acknowledges choosing the right receptacle can be a challenge. “Even the people I work with and have talked to several times, they still get confused.”

This confusion adds complexity to Tillotson and his team’s sorting process.

Take plastic, for example. All rigid plastics are recyclable, while soft, thin plastics such as plastic bags are not. If soft plastic ends up in the recycling bin, Tillotson’s team must pull it out — by hand.

Sorting waste is not an easy task, which is why SRJC works to educate students with coffee cup demonstrations around campus and through efforts by the campus Ecoleaders club and those like Tillotson who are glad to help confused students. He suggests students whip out their cell phone to Google where to put waste if you’re truly confused.

Environmental science Instructor Martha Murphy testifies to Tillotson’s efforts to keep the SRJC community educated and its campus relatively garbage free. She also works for Sonoma State University, so she can compare the two campuses’ waste management programs. Murphy believes SRJC has a unique program that represents the college’s character.

“SRJC’s program is different and more extensive, especially now that we have Guy being so proactive,” Murphy said. “It’s easier to recycle more things at SRJC, and those who are really dedicated can even compost.”

Each of SRJC’s waste-related initiatives—ease of recycling, increased education and even the resale of scrap metal—shows the college’s push toward increased sustainability with one thing in mind: becoming a zero-waste campus.

“People think zero waste means someday we won’t throw anything away. That would be like saying ‘no racism’ or ‘no sexism,’” Tillotson said.

Instead, Tillotson describes zero waste as the minimization of as much waste as possible. And he sees it as possible in the college’s future.

Murphy has her doubts about whether zero waste is achievable on campus. “I think there are several things that will keep us from becoming 100 percent zero-waste,” Murphy said. “One is student turnover, since many students only stay around for maybe two or three years and we have so many part-timers. It’s difficult to educate them on how our recycling works here on campus.”

But California law is on Tillotson’s side. The 75 Percent Initiative, a bill the state legislatures in 2011, requires the state to recycle, reduce or compost 75 percent of its solid waste by 2020 passed.

The initiative takes a top-down approach different than Tillotson’s hands-on, can-by-can strategy, but both Tillotson and the state are on the same quest: a garbage-free SRJC.