An afternoon with Frank Chong 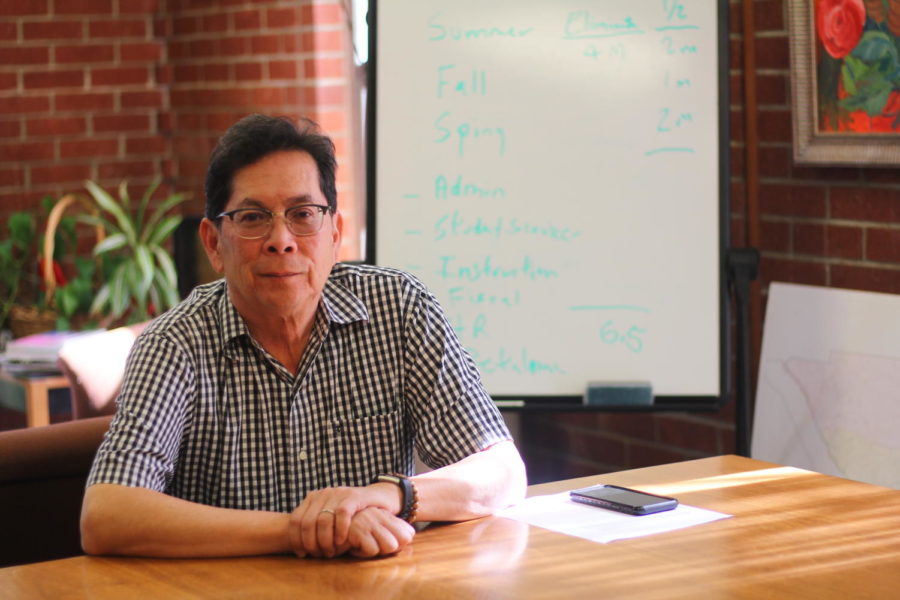 SRJC President Dr. Frank Chong announced new safety measures for both the Santa Rosa and Petaluma campuses one week after a report of a suspect with a gun on campus.

Dr. Frank Chong is the first person of color to become president of Santa Rosa Junior College. He is a proud Chinese-American who broke the mold with his social influence. Chong sat down with The Oak Leaf, and shared his upbringing, ambitions, accomplishments and the projects SRJC has to look forward to.

Oak Leaf: Being the youngest of five children, losing your father at a young age, growing up in New York City and with all your circumstances, how did that influence your ambitions?

President Frank Chong: Being a Chinese, Asian-American, growing up you really didn’t see a lot of figures who looked like me who were presidents, or mayors, or NBA players. We  struggled to find role models. So I figured, if I didn’t have my own role models, maybe one day I could be a role model to other young Asian-Americans. I think I’ve been able to do that. For me, growing up in those circumstances made me grow up faster—not having a dad and having my mom struggle to support five children. I’m just really grateful that my siblings, whom I’m still very close to, made it through.

OL: When did you start to realize that you wanted to get into higher education administration?

PFC: I fell into it accidentally. I met a fellow named Evan Dobelle and he became the Chancellor of City College of San Francisco. He was looking for someone to fill out his administration. He gave me the opportunity to work at a community college and I loved it. It always intrigued me whether other Asian-Americans could be in non-traditional positions. A lot of Chinese and Asian-Americans are tracked to be doctors and engineers. I guess I was wired differently. I was always really into politics and social change.

OL: You had a chance to work with former Speaker of the California Assembly Willie Brown and later served as Deputy Assistant for community colleges at the Department of Education. What was the most important work you did there?

PFC: That appointment to work for the Obama Administration was really the highlight of my life. It was such an honor and I’m most proud of the fact we pushed for greater access for education. During the recession, when President Obama first came in, every department in the cabinet was reduced in funding except education. To me, the administration was very supportive of community colleges. They knew that we were the best and most cost-effective way to really educate millions of students.

OL: You’ve been an outspoken advocate for minorities and education throughout your career. What does that mean to you and what does that say about Sonoma County’s community?

PFC: It means a lot to me just to be asked to lead a college that is so prestigious and has such a rich history. When I first came here, the student population was 25 percent Latino. Today it’s 33 percent. To sit in this office, I think it means a lot for students of color to see somebody like myself get to a position of influence. I try not to take that for granted. I’m a president for all the students, not just students of color. The great thing of community college is that there is such a rich diversity of age, gender, religion and geographic.

OL: You’re only the fifth person to be named president at Santa Rosa Junior College. What does that say about this college?

PFC: It says that people who come here don’t want to leave. It says that this is a great community that supports its community college and its president. When I go to statewide conferences and tell people I’m only the fifth president in over a hundred years, their jaws and eyes drop. I’ve been very fortunate to be selected to be one of the five.

OL: What are the current projects for the near future and what is your vision for SRJC in 10 years?

PFC: Currently, we are working on spending the $410 million from Measure H. We’re starting to see some of the portables come up. We’re re-doing the theatre, which is very exciting. A lot of community folks come here to watch our plays and listen to our music. When the theatre is finished, it’ll be a state-of-the-art theatre. We’re also going to redo the athletic facilities that are pretty worn down. Finally, the science building will be built. It will be state-of-the-art, so that students who go into nursing and STEM fields will have a great facility.

We also put a lot of money into sustainability projects. This summer, you’re going to see hundreds of photovoltaic [solar] panels in the parking lot. Hopefully, we will use that electricity to decrease our energy bill and costs. There also will be charging stations for electric cars. We want to be real green, we want to save money. We want to use the investments we put in. They will have long-term impacts. Because right now our average energy bill for the college is a $1.5 million. Once all these go in, we should be net energy zero [self-sustaining]. It’ll take 10-12 years for these investments to pay off.

OL: What is your favorite part of being a college president?

PFC: The fun part is meeting students. Seeing the impact the college has on its community and their lives. I’m a people person, so I love meeting with students, faculty and staff. I love being around the quad and seeing what’s happening there.

Our President of SRJC is a huge basketball and sports fan. During his academic career at UC Berkeley, he refereed intramural sports.