Centennial Series: The BSU is alive, but is it growing? 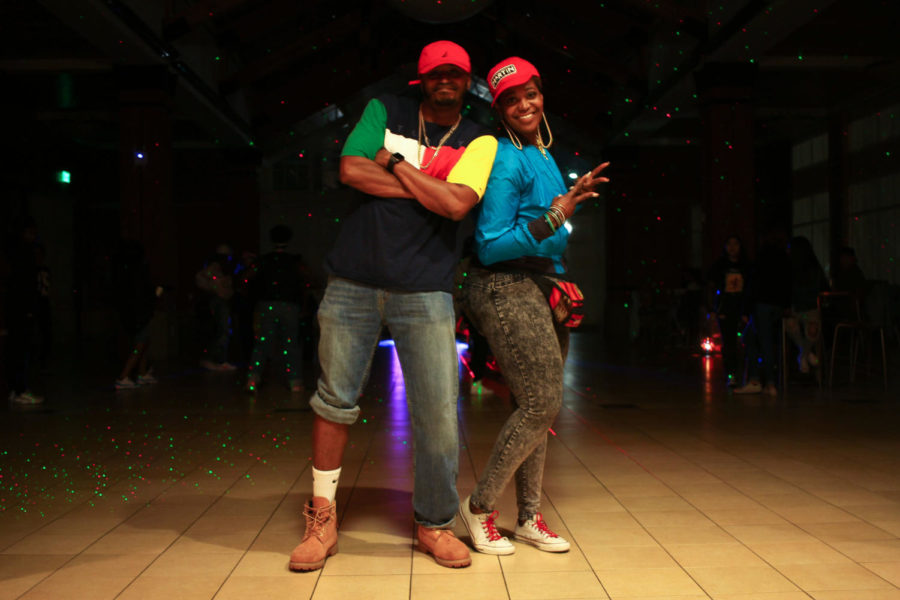 Umoja Team founders Regina Mahiri (right) and Byron Reaves (left) pose for a picture before being called to the dance floor for the "Cha-Cha-Slide."

The Santa Rosa Junior College Black Student Union (BSU) has been in existence since the late 1960s. Throughout the years its mission has been to unite the African-American student body.

According to an October 1968 Oak Leaf issue it wasn’t until after 1968 that the BSU was even started. Initially in 1968, a constitution for a proposed Black Student Union was rejected by a vote of the Inter-Club Council on September 24. A two-thirds majority was needed to pass the constitution, and the vote was 10-9 against.

Black student leader, John Cark, debated the issue with ASB President Ralph Leef, who claimed the BSU would be a segregated club, while Mr. Clark stated the club would be a social organization which would voice the opinions of black students.

The article further states that a “Recall Petition” was implemented immediately after the ICC meeting. Faculty member Mr. Harrington, along with several black SRJC students, requested a copy of the Associated Students’ Constitution from the student activities office and proceeded to circulate a petition to recall Leef.

On Sept. 27, 1968 a petition with 518 signatures was delivered to student activities office. About 350 signatures were needed to force a recall election.

A roll-call vote from all ICC members was taken on the acceptance of the Black Union Constitution. Again, a two-thirds majority was needed for it to pass. The vote was 16-9 against, with one member choosing to abstain. Again, the motion to pass the constitution failed.

“We are a club that believes in not equality but equity. And believe we can gain equity by holding events of dialogue, protest and most importantly educating ourselves,” the mission statement said. “We hold forums, fundraisers and educational seminars for high school and college students, and other events—we are firm believers in the Martin Luther King, Jr. quote, ‘Injustice anywhere is a threat to justice everywhere.’”

According to current BSU President Dyonna Johnson, throughout the years the mission has been to unite the African American student body.

“[BSU] organizes events that have a broad effect. Dyonna is just like any president—she faced challenges institutionally and personally, I think she’s grown by doing things outside her reach. Black History Month was a huge success,” Hale said.

“I am extremely proud of her,” says her mother Regina Mahiri. She is an administrative assistant in SRJC’s Student Equity department and anUMOJA team member. “Often times our kids are not being completely educated about themselves or their culture. She’s definitely developed her leadership and communication skills in this role.”

According to the SRJC library archives, the Oakland chapter of the Black Panther Party was instrumental in the creation of the BSU, on campus. One member of the BSU who has recently brought the organization to the local and national forefront, is Tyler-Avery Lewis.

Earlier this month the Rohnert Park native was named Miss Sonoma County, the first African-American to secure the title in the competition’s history.

Lewis is still flying on cloud nine after the competition, and so is everyone at the SRJC who knows about her win. As they say, this news has “gone viral.”

Another notable alumnus is 2014’s BSU president Elias Hinit, who was very popular among all students. Hinit coordinated many events and encouraged students of African descent to join the club. Hinit, of Eritrean descent, went on to earn the distinction of being the first African-American to deliver the valedictorian speech at SRJC. He is now on the leadership team of the BSU at UC Berkeley.

Recent BSU member LaReva Miles is an SRJC student in digital filmmaking with a background in journalism. “The BSU history has been one with effective leaders and the challenge is to make it strong as we go into the future,” Miles said.

Dyonna Johnson, the current BSU President, is a charismatic leader focused on justice. “A problem with the BSU right now is that not many students show up for the meetings and they don’t last long. After a while it seems almost pointless,” Johnson said.

“You get desensitized when no one shows up,” said Johnson. She added that the group wasn’t dealing with the issues on campus and in the community at large.

“We need to be dealing with the issues Black and Brown students are facing within the public schools and in the community.”

“My goal is to look at our history from slavery, to the civil rights movement, to the present. Looking at the ups and downs has been part of my growth,” said Johnson.