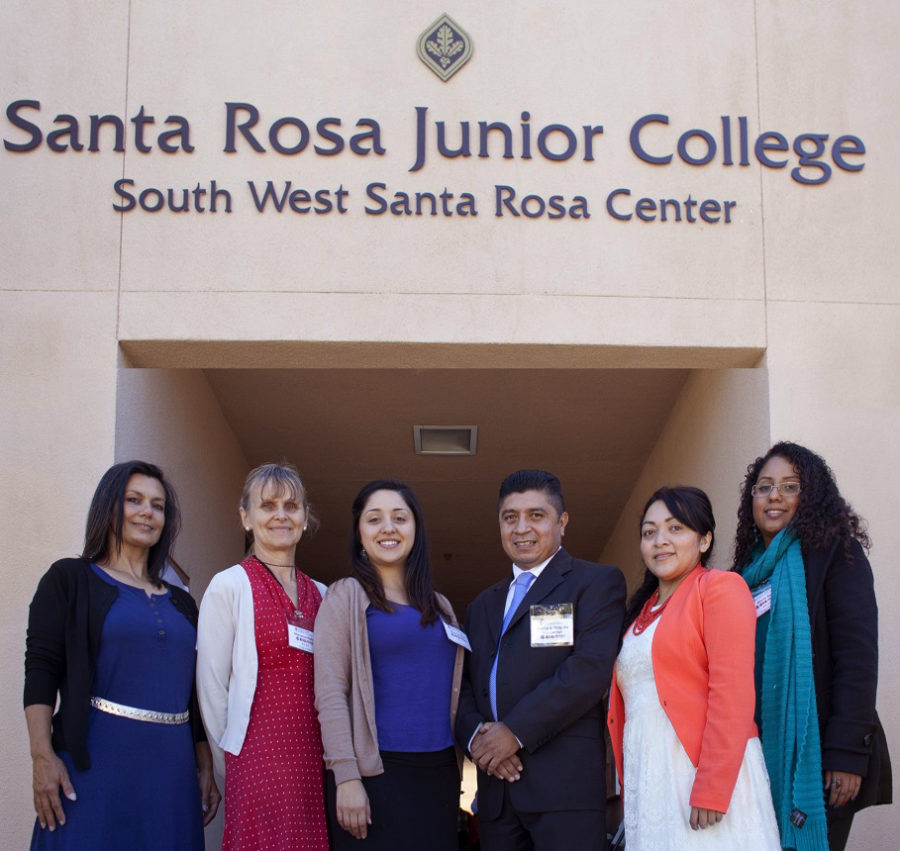 The SRJC Southwest Center in Santa Rosa provides a space of higher learning to an often looked-over student population.

Erika Moreno-Pratt, 48, came to the U.S. from Mexico six years ago. In the summer of 2013 she enrolled in classes at the SRJC Southwest Center.

Moreno-Pratt learned about the center the way most of its enrollees do; through word of mouth. “My husband and I were talking to some friends from Mexico whose wives took ESL [or English as a second language] classes and they gave me the number to enroll.”

The center operates with little to no fanfare; some people don’t even know it’s there. Despite being less than 10 years old, few developments have been as vital and impactful to the future of SRJC over the school’s 100-year history than the Southwest Center.

Students who are either too uncomfortable or unable to enroll in courses at a more conventional college setting can use the center as a bridge to higher education.

“This location serves as a ‘point of entry’ for students coming from low socioeconomic backgrounds,” said Southwest Santa Rosa Center manager Hector Delgado. “Originally the plan for the center was to serve the Roseland area, but we’re getting enrollment from pockets around Santa Rosa, like the West Ninth Street and South Park neighborhoods. We’re even getting students as far as the Canal District in San Rafael.”

Delgado credits the uptick in enrollment, which hovers between 1,100 to 1,250 students per semester, to the strong word-of-mouth advertising from current and former students.

However, the reviews for the center were not always positive. When the Southwest Center opened its doors in January 2009, students and members of the community criticized it for not being directly located in Roseland, the original planned location for the center.

In 2006, then SRJC President Robert Agrella assembled a task force to develop the concept for a campus in the Roseland area. “The Roseland Report,” a community research assessment, determined that the Roseland area needed a higher education center. Then the recession hit and plans for the center were shuttered until Fall 2008.

When the center opened to the public in 2009, concerns over maintaining the enrollment of the ESL population appeared to run higher than enrollment itself.

“We thought we’d lose a lot of students during the transition in the beginning to the Southwest Center,” Delgado said.

For nearly 20 years prior to the center’s opening, ESL classes met at the Labor Center on Corby Avenue in Santa Rosa . “In 2008 we had 2,000 ESL students and 500 of them were at the Labor Center,” said Marti Estrin, a former non-credit ESL coordinator for close to 20 years and current adjunct instructor at the Southwest Center.

Estrin remembers the Labor Center as a place ill equipped to house students and classrooms. The Labor Center provided no restrooms and lacked a true college atmosphere.

“The old culture at the Labor Center was ‘open-exit’ and not much accountability—like, ‘come when you want, leave when you want,’” Estrin said. “We had no technology there and we totally outgrew the space. It was also expensive and not modernized.”

Students were hesitant to make the five-mile move from the Labor Center on Corby Avenue to the Southwest Center on South Wright Road. “We put an outreach team together, tied in with local businesses, TV stations and radio stations to promote the center,” Delgado said.

The grassroots campaign worked and the center increased enrollment in its first few years. The Southwest Center established student learning outcomes and course outlines for all of its students, services unavailable in the years of the Labor Center.

“The culture has become much more academic and accountable,” Estrin said. “We took classes that were 17 weeks and made them four days a week, so students got 105 hours in 8 weeks instead of 17 to increase retention, and it’s been successful.”

Currently, the ESL department is the third largest at SRJC, serving more than 2,500 students a semester. “The need for English-language classes at the JC reflects the demands of the community at large,” said ESL department chair Jessica Pardoe.

“Our ESL students are not ‘behind’ in English. Rather, they are ‘ahead’ of their monolingual peers as they are well on their way to communicating in at least two languages,” Pardoe said. “It’s time we as a college community recognize this and commend the attainment of multilingualism in itself as a laudable accomplishment.”

An estimated 45 percent of the current ESL credit students began as non-credit ESL students at the Southwest Center, serving as a testament to the center’s ability to bridge the gap to higher education.

“The goal here is to take students from non-credit instruction to credited classes,” Delgado said. “Our students make tremendous sacrifices to learn English at night and on the weekends, coming in and working hard after cooking, cleaning and raising families all week. This is the future of SRJC.”

Students like Moreno-Pratt demonstrate the center’s impact on the lives of community members. In Spring 2014, Moreno-Pratt successfully transfered from non-credit classes at the center to credit courses at SRJC’s main campus on Mendocino Avenue. She completed the ESL program at SRJC in Fall 2015 and now works for the school as a part-time instructional assistant in the ESL department.

“When I took the placement test at the Southwest Center I watched the staff proctoring the test and said to myself, ‘I would like to do this job someday,’” Moreno-Pratt said. “I visualized myself doing that job then ended up doing it.”

Moreno-Pratt admits the transition from the center to the SRJC campus is “a big change” for students in the ESL program. Additionally, undocumented students face fears in today’s political climate.

“Last year some students just stopped coming to class because they were afraid to drive and take classes at night,” Moreno-Pratt said. “Most students feel safe at the Southwest Center, because they realize there are many students that don’t have documents.”

Moreno-Pratt stressed the importance of making undocumented people aware that these resources are available for them. “We always tell the students, ‘Don’t worry. You can take classes even if you don’t have documents,’” she said.

While Latinos comprise a majority of the student body at the Southwest Center, another population steadily increases year after year: the Adult Education program. In 2013, California approved Assembly Bill 86 which apportioned more than $20 million in state funds to the California Community College Chancellor’s Office to develop regional plans improving adult education.

This semester the center offered 74 classes with expansion plans on the horizon. Despite this success, the center remains largely unknown to the greater SRJC community. “I see it two ways: we’ve done a great job about making the local community know what we are and what we do, but we haven’t done a great job with making what we do known within our own community at SRJC,” Delgado said.

Most visitors to the center still have trouble recognizing it as an actual campus. “People who visit the Southwest Center say, ‘How come it doesn’t look like the JC [on Mendocino Avenue]?’” Delgado said. “I laugh because it’s hard to explain what it used to look like at the Labor Center to what it is now.”