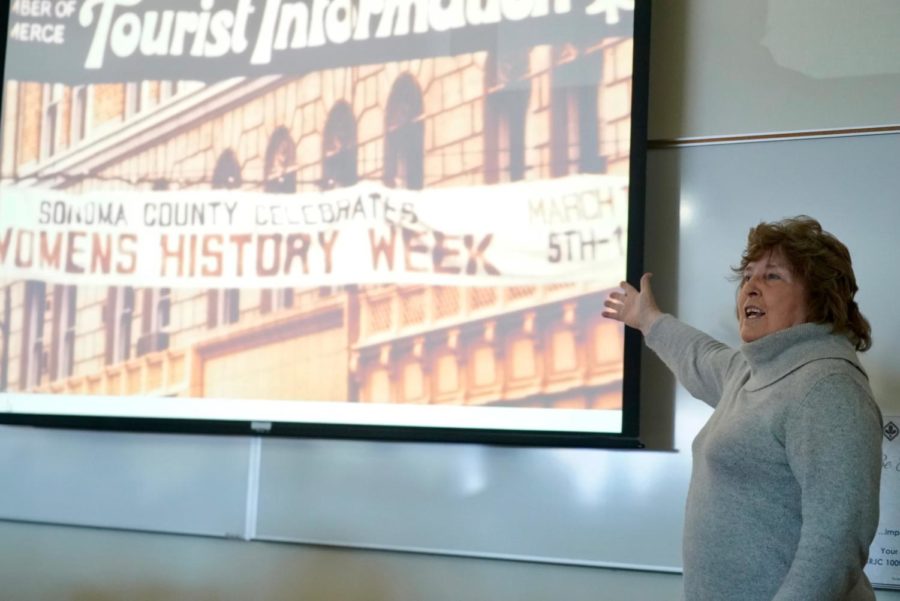 Molly McGregor presents a slideshow of images from the first Women's History Week in 1978 to students on Monday March 5. Photo by Rachel Edelstein.

Students at the Petaluma campus quietly filled room 656 as MacGregor recounted the events that brought her to that moment.

In 1964, MacGregor started her first job at Bank of America. When a male colleague, who started at the same time, asked her how she got by on just $400 a month, MacGregor thought there was a mistake. She only made $280 a month.

There was no mistake.

Her colleague was on a different training program than her. Her boss, upon confrontation, walked her to the front desk and condescendingly announced that customers didn’t want to see a woman in a position of authority.

No one had questioned the nuns’ authority at the Catholic schools she’d attended. Unfamiliar with words like misogyny or discrimination, an 18-year-old MacGregor did know the word “stupidity.”

She quit that job.

MacGregor began studying history in the fall at SRJC, which transformed her, as what she learned conflicted with her religious upbringing. She grew to love history.

In the early ‘70s MacGregor taught in Southern California. During a summer class, a boy raised his hand and asked her about The Women’s Movement.

Despite her passion for history and her straight A’s in college, MacGregor didn’t know about the Women’s Movement.

She combed her books after that and found a tiny passage about the 1848 Seneca Falls Convention. This women-led event started the women’s suffrage movement, and MacGregor realized that many historically noteworthy women were absent from school curriculum.

“The female experience has been so diminished over time,” MacGregor said. She used examples  such as, “you throw like a girl.”

She deeply understood that learning about historically important women, as well as the women in each person’s life, benefits both men and women.

With the help of colleagues Mary Ruthsdotter, Paula Hammett, Bette Morgan and Maria Cuevas, MacGregor proposed to Sonoma County school administrators the celebration of Women’s History Day on March 8, 1978. One day was not enough though, and in its first year, the event became Women’s History Week.

“We teach history as if it just happened. No, it didn’t just happen. People make it happen,” MacGregor said.

The five women developed woman-based curriculum to teach throughout the week and hosted events with music and speakers.

The teachers shared their concept as widely as they could, with educators in other areas petitioning their local governments to declare the week of March 8 “Women’s History Week.”

Later that year MacGregor mailed a proposal to the federal government, and received a call from the White House in July 1978.

In retrospect it seems like these steps happened with an avalanche of support, but it wasn’t always easy.

MacGregor and her team became adept at stepping back to meet people at their level.

“The key is to ask them questions, especially if they react to something you say. It doesn’t mean you’ll come to an agreement, but at least you’ll have a dialogue,” MacGregor said.

In 1987, after further petitioning, Congress designated the entire month of March as Women’s History Month.

Since then, MacGregor and the National Women’s History Project have worked tirelessly to carry the movement forward.

With grants from the Federal Government, the project produced a DVD presentation that taught instruction ideas for Women’s History Month, and created a 35-minute video on the history of Mexican-American women, the first of its kind.

The project distributes more than 100,000 catalogs and tens of thousands of women’s history posters, celebratory materials, books, videos and curriculum resources to teachers nationwide every year.

“It was inspirational and eye opening to see what Molly has gone through, and that she’s still advocating today,” said Amanda Hellman, 27, SRJC social and behavioral sciences student.

Hellman now plans to register to vote, after realizing that one voice can make a difference.

“I thought it was very moving to see what not just Molly has done, but to see what other women throughout history have done, like getting the right to vote,” said Marbim Diaz, 22, SRJC dental hygiene student.

The 2018 Women’s History Month theme is “Nevertheless she persisted,” in reference to February 2017 when Senator Elizabeth Warren, D-MA, was silenced during Jeff Sessions’ confirmation hearing for Attorney General.

Students stayed after MacGregor’s presentation to take photos with her and to sign a special scroll that will be a part of the centennial time capsule.

Both the SRJC and Petaluma campuses will host events this month honoring women’s history.