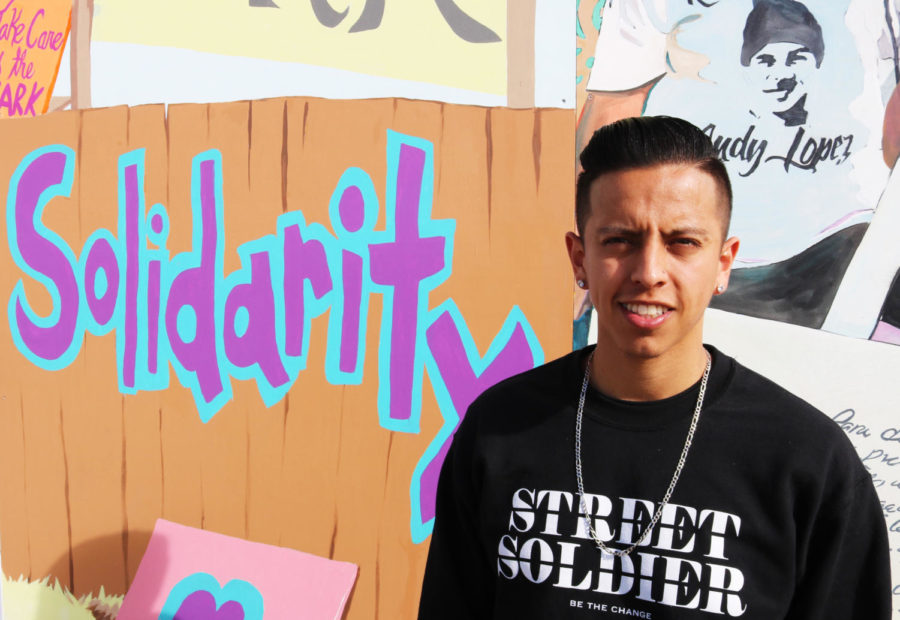 The Roseland Community Village shopping center is a flurry of activity on a Saturday morning. The heart of this culturally diverse yet civically insulated neighborhood awakens with its residents. Eritrean, Latine, homeless – there’s a unique cross section of life operating within the neighborhood’s central nervous system.

On one end of the shopping center, street vendors briskly make their rounds. The majority specialize in tacos and tamales. Some peddle fruits and vegetables, others offer the healing powers of Jesus and Mary Jane.

On the opposite end, members of the “Remembrance Village” homeless encampment trickle in and out of the Dollar Tree. They congregate in front and out back of the discount store with cigarettes and sodas.

In the middle of all this activity stands Danny Chaparro, 25, former Santa Rosa Junior College student, Chico State graduate and the newly appointed member to Santa Rosa’s community advisory board.

The community advisory board is an extension of the city council and consists of 14 members, with the mayor having the final say on approving new members. Each council member is allowed to appoint two members covering seven areas in the city. They are volunteer positions that meet once a month. The board members serve as a bridge from the community to city government, hearing from the neighborhood groups in their areas and relaying those concerns to the city.

What makes Chaparro’s appointment significant is that he’s the first person to represent Roseland in the role. Prior to Roseland’s annexation by Santa Rosa, the role never existed.

He scans his surroundings, his homebase, shaking his head at the gaping lot in the middle of the center. “This needs to be a rec hall or a place for kids,” he says. “Kids here grow up too fast; they just don’t have the resources they need.”

For an area that appears to be in constant motion, things seem to remain stuck in neutral. The recent annexation into Santa Rosa, coupled with Chaparro’s even more recent appointment as leader of Southwest, may finally shift Roseland into a different gear and on the fast track to change.

What that means exactly remains to be seen. “I want the neighborhood to change, but I don’t want it to give in completely,” Chaparro says.

Chaparro is a natural fit to represent the area: a bilingual, Mexican-American Roseland resident with the ambition and passion for helping his community’s disadvantaged and underrepresented members. Chaparro works as a case manager for a non-profit organization helping at-risk youth.

These attributes stood out to Santa Rosa Mayor Chris Coursey when selecting Roseland’s community advisory board member. “Danny is young, enthusiastic and he’s engaged with the community,” Mayor Coursey says. “Danny is not just connected to the community of Roseland, he’s involved in all levels of the city.”

His clothing brand, Street Soldier, launched two weeks before the Northern California wildfires as a form of positive reinforcement for community members working to make a change in their lives and a difference in their communities. The Street Soldier roster of outreach members includes alleged gang members and homeless youth.

Immediately following the fires, Chaparro mobilized the Street Soldier team. “We donated food and water to shelters, but I realized that wasn’t enough,” Chaparro says.

The Street Soldier relief squad went from four to 50 people in one day. They bought appliances, clothes, food and assembled care packages for families. “That’s when I felt like I could really take on the role of a leader,” Chaparro says.

Chaparro’s ambition, genuine demeanor and ability to act quickly in a time of crisis caught the eye of Salvador Sanchez-Strawbridge, 34, a community outreach specialist for the city of Santa Rosa. Sanchez-Strawbridge assisted in coordinating the Elsie Allen High School evacuation center during the wildfires.

“The disaster showed that Danny was real,” Sanchez-Strawbridge says. “I don’t vouch for people lightly. I can vouch for him.”

Sanchez-Strawbridge, once a gang member from Santa Rosa’s South Park neighborhood, went on to earn a Master’s degree from USC in educational leadership and ethnic studies. After spending time as a freelance photojournalist, he became the social media manager for Homeboy Industries, a Los Angeles-based company that provides hope, training and support to gang-involved and previously incarcerated men and women. He credits his time with Homeboy Industries as a real turning point in his life, guiding him back to Santa Rosa to give back to his hometown.

“I took a lot from this city, man. Now it’s about giving back,” Sanchez-Strawbridge says.

Chaparro and Sanchez-Strawbridge first became aware of one another through the community outreach work they do. “Danny has the passion of seeing his community ignored and disenfranchised and the will to help them better themselves.”

Chaparro’s passion led Sanchez-Strawbridge to encourage him to represent Roseland as a community advisory board member and attend a Santa Rosa Together meeting at the Roseland Community Library.

Chaparro wound up serving as the only capable translator for the grassroots event held by parents and community members. His ability to step in and connect with both English and Spanish speakers prompted many within Roseland to suggest that he apply for the representative position. The meeting sparked intrigue within Chaparro to learn more.

“He took it upon himself to find out more about the board,” says city of Santa Rosa Community Engagement Coordinator Danielle Ronshausen. “He’s very committed and very passionate about the Roseland area and his community.”

For Roseland, having a Santa Rosa City Council representative would be a major step forward in revitalizing an area that has seemingly been an afterthought for decades.

“Daniel is coming in at a good time; they’re beginning the strategic planning process from the community advisory committee,” Ronshausen says. “The city is also in the process of developing district boundaries. From there we will hold a districts’ election process, so Roseland or the Southwest area can potentially have someone finally representing them at city council.”

Mayor Coursey hopes residents of post-annexation Roseland will involve themselves and engage with city government to facilitate changes for the future. “We’re hopefully going to have our first city council member from Roseland after the districts’ elections in November,” Mayor Coursey says.

Residents who live and work in these districts are all too familiar with the lack of options and resources available to them. Amber Stiving, 28, a first-grade teacher at Roseland Creek Elementary school and close friend of Chaparro’s can attest to this.

“Teaching in this district, I see the need that’s needed here is so much more than other areas,” says Stiving. “Roseland needs more available places for the youth. Like a community garden and parks.”

Stiving asks Chaparro to speak to her classes from time to time, talking about the differences between a boss and a leader. “He makes them think, ‘What’s the easiest way to make a change in my community?’” Stiving says.

Stiving was born and raised in Roseland and is well aware of the negative connotations some outsiders associate with the neighborhood. “There’s so much more to Roseland,” she says. “I hope to see those negative outlooks turn to positives for the overall community.”

Chaparro agrees with this. “People love coming here for the tacos, but they eat and leave. Why not eat and stay?” he says.

Post-annexation, Chaparro and the city of Santa Rosa’s focus will be convincing people to stay and embrace the area to help make changes in Roseland.

“We want to keep Roseland the way it is,” Community Engagement Coordinator Danielle Ronshausen says. “Instead of county working on the roads, it will be city. And instead of sheriffs patrolling, it will be SRPD.”

Residents like Stiving aren’t too concerned with the forthcoming changes affecting the fabric of the neighborhood. “It has its own culture,” Stiving says. “It’s unbreakable.”

The area’s strong flavor is something that even came up in discussion between Mayor Coursey and a group of students from the Roseland school district at city hall. “I told the kids Santa Rosa has grown all around Roseland, making  the neighborhood like a hole in the middle of a donut,” Mayor Coursey says.

This statement elicited a poignant response from a young schoolgirl who stuck her hand up and said, “Roseland isn’t a hole. It’s the jelly.”

It’s an observation Mayor Coursey agrees with. “It is like the jelly filling for the city in a lot of ways,” Mayor Coursey says. “It’s sweet, with a lot of flavor to it.”

Another observation most residents generally agree on is the ability of Chaparro to represent Roseland and help guide the area as it ventures into uncharted territory.

“We’re not doing this to have a token brown guy,” Sanchez-Strawbridge says. “He’s someone who if you put in the right position, he will walk through it. I’m proud of the city for doing this. It’s a really progressive move.”

Chaparro appears up for the challenge of Roseland’s first community advisory board member. However, there’s an even bigger challenge down the road that Chaparro believes he can take on.

“The mayor asked me where I see myself in five years,” Chaparro says. “I told him, ‘I want to be the mayor.’”