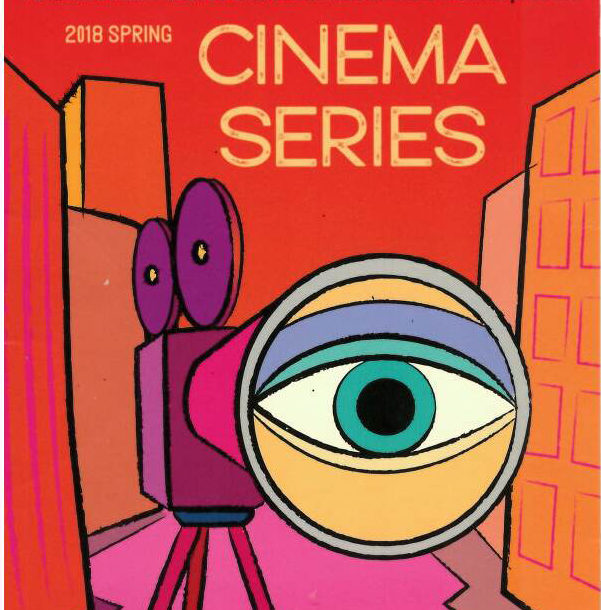 The flyer for the 2018 Petaluma Cinema Series.

The Petaluma campus isn’t the cultural epicenter of the Santa Rosa Junior College experience. The Santa Rosa campus boasts the brick buildings, the sports, the art and theater productions. And while the “community feel” of the main campus is sparse, it is almost non-existent in Petaluma. But this all changes on Wednesday nights with the Petaluma Cinema Series and the unique culture and community it fosters.

“I honestly think that having the PCS on campus made a community of film enthusiasts, which is unseen at NYU. It is nice to have an environment where people are talking critically about film,” Schmidt says.

Each semester, the PCS has a new selection of films chosen by Programming Director and Media 10 professor, Mike Traina. The features range from Oscar nominees to cult classics to arthouse films rarely seen on U.S. big screens.

Traina structures the series into three parts with crowd pleasers and Oscar nominees up front. These are movies like “Three Billboards”, “Lady Bird” and “The Shape of Water”, which can still be viewed at local theaters. Traina selects films vying for top prizes so both the students and community get one last chance to watch them.

“They are also kind of special, non-theatrical bookings because none of them are out streaming or on DVD. So besides the cinema series, the only other place to see these films is to go pay three times the amount at the multiplex,” Traina says.

The middle section of films, are selected to exhibit a specific aspect of filmmaking. “The Shape of Water” will be shown to teach production design, “The Apartment” for cinematography, “City of God” for editing and “Song of Granite” for sound design.

The third part of the series is the most flexible. Traina uses this time to showcase exciting movies on the film landscape. This year the PCS will feature a documentary called “Faces, Places”, which Traina named as one of the runaway favorite docs of the year.

Each semester also offers a silent film with live music accompaniment. Traina chose two Lon Chaney and Todd Browning collaborations, “The Unholy Three” and “The Unknown”, which will feature a live pianist on April 18.

“For those who have never seen a silent film with a live musical performance, it is a very unique experience,” Traina says.

But the most popular special events are the guest lecturers. Visiting directors or film scholars are consistently scheduled to provide students a different film perspective. This year Traina scheduled Canadian director Ivo Marloh presenting his 2017 documentary, “All the Wild Horses” on March 28. The first director visit will take place this Wednesday in a special Valentine’s Day event with Finn Taylor and his 2016 film, “Unleashed.”

“It is really hard to make a good independent romantic comedy and “Unleashed” is a sweet, wonderful, unexpected story by a local Bay Area director,” Traina says.

Taylor has directed for over 20 years. He’s traveled to hundreds of film events around the country; he’s never heard of an event like the PCS.  Taylor is a big fan of the concept. Although most people who watch “Unleashed” will likely stream it, Taylor says most directors still make their movies hoping they are viewed on a big screen. While touring in the past he witnessed some community cinema societies, which project smaller films like his for otherwise unreachable audiences, but they have mostly died out.

Taylor has never encountered a community-centered film discussion like the PCS. He is hoping to talk with the audience about the difference between craft and art, passion and careerism.

“It is an exciting format for dialogue because, as Americans, we are not all literate in novels and poetry. But, we are quite literate in film,” Taylor says.

For Traina, this is the goal. The PCS not only hosts unique movies open to the public. He delivers a prelecture focused on the techniques in the film, and facilitates an audience-driven discussion after the viewing.

“The aim is to create something analogous to a book club, where people get together, share the experience of the visual text and have a conversation about its meaning and resonance,” Traina says.

Where book clubs are powerful in bringing people to a common page for discussion, they take time and commitment. The PCS is like a four hour book club injection. And there’s popcorn. The content is absorbed in less than two hours and the immediate discussion ensures the information is fresh. For students and community alike, the discourse after can be just as fascinating as the movie.

For a film buff like Schmidt, the movie itself is of extreme importance. The PCS is where he found “Force Majeure,” “the number one best film ever created,” according to Schmidt. But still, he considers the post-discussion integral to the Wednesday night experience.

“I think the SRJC students and the wider community are a pretty interesting bunch, spanning from very liberal people to very conservative. I find it fascinating to hear all the opinions because some of them are fairly controversial,” Schmidt says.

Nora Murray, 21, took Media 10 in the fall of 2017. Her favorite part of the class is a tie between the film viewing and the post lecture. Murray said it was interesting to hear the emotional responses from peers because it often fuels a political discussion.

“When we watched “Get Out” for example, one of the community members said, ‘I don’t understand why it is important that he is black,’that really fired up a lot,” Murray says.

Not only does Traina play provocative films that push many outside of their cinematic boundaries, he provides a forum for them to share their reactions face to face. This type of event—with provocative content, and a venue for discussion—has the capacity to change perspectives.

Taylor believes this is something the younger generations needs now more than ever.

“Sometimes with the ubiquitous nature of the cell phone, it is almost painful for younger people to talk to one another eye to eye,” Taylor says. “But you will learn so much that way that you can’t read in text. Things you can hear in a person’s voice or see in their body language.”

The post-discussions are audience driven, but there is no doubt that the Petaluma Cinema Series is a reflection of Mike Traina. He chooses the films, leads the prelecture and plays a significant role in steering the conversation.

It’s the PCS’s 10th straight year of production, except for the fall of 2014 when Traina taught in Paris. He is currently planning another trip. This time, Traina will leave for the full 2018-19 school year on sabbatical.

Perhaps the true test of the cinema series is its resilience under the direction of a new programmer. The first contestant is Alex Pirolini, the Italian Film scholar who is projected to teach Media 10 and host the PCS while Traina is away next year. Pirolini will have his first go on April 4, when he comes to guest-present the Italian thriller, “Don’t Look Now.” But no matter how capable the technician, the series will surely take new form.

Luckily for Pirolini, Traina, or anyone else with a vested interest in the PCS, some back bone remains. The dedicated students and community members—some of whom have attended for more than 10 years—will continue to support this event. The community of film enthusiasts remains.

After the movie there is a short break and then, from 9 p.m. to 10 p.m., the film discussion. The entire event is free to students with a Cub Card, $5 for those without and $6 for non students—the most affordable big screen viewing around.