From low GPA to President of SGA 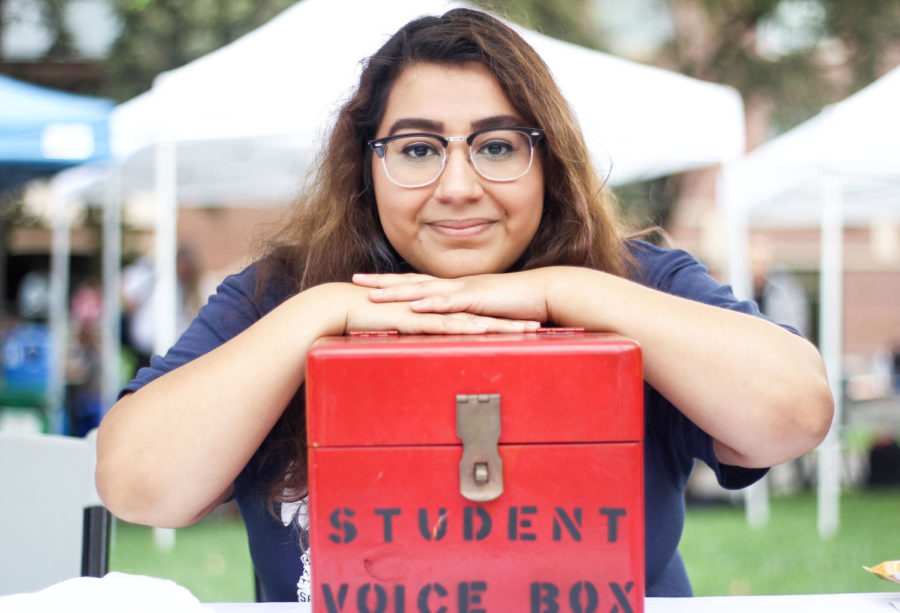 There is a common misconception that successful Santa Rosa Junior College students follow a linear academic path straight from high school. Student president Evelyn Navarro, 24, seeks to challenge more than one convention in her role at SRJC.

“The norm is not a woman of color in a position of leadership. I want to make my story a norm,” Navarro said.

Navarro sat at her desk in Bertolini Student Center in early December and reflected on her presidential experience, she described her journey from dropping out of high school, and failing out of SRJC, to holding the highest student leadership position on campus.

Navarro’s office was filled with lively decorations. A Dia De Los Muertos skull sat in the far corner and colorful fliers were taped around the room.

“We are not allowed to tack anything on the walls,” she said. “But I do my best to make it look more inviting.”

Just as the interview began, someone from administration entered to schedule a meeting on an upcoming Friday. There was some deliberation in attempts to move the meeting from what Navarro would later describe as her one personal day of the week—a day often devoted to sleeping, crocheting or reading.

Navarro grew up in Santa Rosa until the age of 12, when her parents’ separation sent her to the small town of Paso Robles. At age 17, Navarro returned to Santa Rosa, where she soon dropped out of high school . After receiving her GED a few months later, she enrolled at SRJC in what she describes as her “first go.”

During her campaign, Navarro often publicized the struggles she faced as a student.

“I am very much a returning student, one who who actually failed her first time,” she said. This was an intentional attempt to challenge the norms of how people often perceive SRJC students. “Our perspective of JC students is kids fresh out of high school, these 18-year-olds who are bright-eyed and bushy-tailed and ready to take on the world,” she said.

Navarro explained that although this description represents some students, it’s becoming less common. The SRJC student body encompasses many varying experiences, including those of returning veterans, adults getting their first collegiate education, students who return to school after long breaks spent working or struggling through personal issues—to name a few. Navarro described her path to SRJC as one of the many unique journeys.

Navarro’s “first go” at SRJC centered on activism. She worked mostly with MECHA and Black Student Union. Navarro is of Mexican, Ecuadorian and Moroccan descent. Although she identified most with her Mexican heritage growing up, she experienced the loss of identity by assimilation. It was through groups like MECHA that she developed a more revolutionary mindset and “discovered she was brown.”

Although her activism flourished at SRJC, Navarro’s grades fell as personal stressors grew overwhelming. After her father was deported, she was forced to leave school with a 0.8 GPA on her record.

She relocated to Oklahoma for two years but found the environment less hospitable to her education. After leaving Oklahoma, she returned to Santa Rosa and worked for a few years before fully committing to SRJC once more. She re-enrolled in the fall of 2016 and took 19 units to raise her GPA as quickly as possible.

“That whole past year was a cleanup,” she said.

She raised her GPA from 0.8 to 2.1, a mark high enough to qualify her for student government. Navarro was not initially drawn to Student Government Assembly (SGA). Former President and current Inter-Club Council Chair Joshua Pinaula was determined to get her into SGA and asked her to join both before she left for Oklahoma and once she returned.

“She is very caring and she is very involved, and these are the hardest things to teach,” Pinaula said.

Entering the SGA, Navarro’s intention was to become vice president of diversity. At a meeting where she spoke about her vision for SRJC, one of the members suggested she run for president.

“I didn’t want to run because I wanted to give the students the best version of myself,” she said.

Despite her doubts, Navarro followed the advice of Stephanie Lynn Star, current vice president of diversity, who advised her not to put off goals she has for herself, or time might pass her by.

Navarro considers herself one of the least popular members of SGA. She describes her winning the presidency by riding on the coattails of the people she ran with. During the campaign Navarro worked to constantly advocate for herself and establish recognition. While scrolling through Facebook to promote one of the many campus events she was excited about, she explained that she refrains from sharing too many events because her lack of presence on the site.

For reference, she clicked on the page of Ryan Sansome, vice president of student health.

“He has a huge presence. It looks like he hid how many friends he has, but it must be like over a thousand,” she said.

After her victory, some students started to recognize and approach Navarro on campus. Some call her “madame president,” which makes her feel awkward; she prefers Evelyn. Others have approached her to reveal they voted for her because she is a woman or a woman of color. Navarro understands the desire to see more women of color in leadership roles but notes that these are not her only attributes.

“It is important to realize that women of color have these positions because we fought hard for them,” Navarro said.

Leadership is not new to her, however she faces unique setbacks as SRJC president.

“It is easy to be on the outside, to be revolutionary, to want to change things up,” Navarro said. But Navarro and her fellow SGA members’ ambitions constantly face the constraints of time, money and clout.

Some tragedies are so unexpected, no leader can adequately prepare for them. In 2017, one disaster marked Navarro’s presidency the most: the North Bay Wildfires. In the aftermath, Navarro advised leaders to first make sure your team is okay and to take care of yourself.

“She very much looks at our body as a family,” Pinaula said.

Navarro echoed this in recalling that immediately after she learned of the fires, she contacted all her “kids,” a term of endearment she uses for her assembly members.

When asked what advice she’d give to students dealing with disasters like the fire, Navarro recommended taking advantage of available resources as soon as possible. At the time, many students did not know about the available Fire Relief Fund and many have not received funds because they are now depleted. She recommended taking care of oneself, physically, mentally and emotionally and listed PEERS as a great organization.

“So often we promote these resources without thinking of them as a resource for ourselves,” she said.

Navarro and colleagues set up a Student Disaster Relief task force to help future leaders navigate such disasters. Navarro paused to make a mental note to contact student representatives she had met from the LA area.

“It makes me sad to think they are going through what we went through. I want to reach out and share information that we compiled in the task force,” she said.

Navarro named the SRJC food pantry, established in 2013, as one of the biggest aids to students after the fire. The free food booths work to combat student hunger.

“Last Wednesday, we accidentally got twice the amount of food. There was nearly 2,000 pounds of produce, and we gave away almost all of it. The need for food is vast,” Navarro said.

At the SRJC Fire Relief event, she spoke to the crowd about unity and pointed to the banner behind her, which read, “The love in the air is thicker than the smoke.”

“I love this quote because you know what is left after the smoke is cleared? Love,” she said. Navarro says she still sees love on campus. “As the weeks go by it kind of dissipates, but I think there is a lot more openness.”

She hopes students are reaching out to each other.

Coordinator and SGA adviser Zack Miranda has witnessed many presidencies throughout his time at SRJC. Miranda reflected on specific aspects of leadership in which Navarro excels.

“She makes a serious effort to check in with SGA members one-on-one, and she takes every opportunity to sit down with students to hear their concerns,” he said.

The thing Navarro would most like students to know about her is that she is open.

“I almost never close my office door,” she said, as her eyes panned to the door she reluctantly saw close at the beginning of the interview. “I purposefully leave it open so people can walk in and speak to me any time they like.”

The presidential office was more restricted in the past, but she pushed to improve her accessibility. Navarro describes herself as awkward and shy, but she tries to reach out to people and get to know them.

“If you see me walking on campus, I am someone you can approach,” she said.