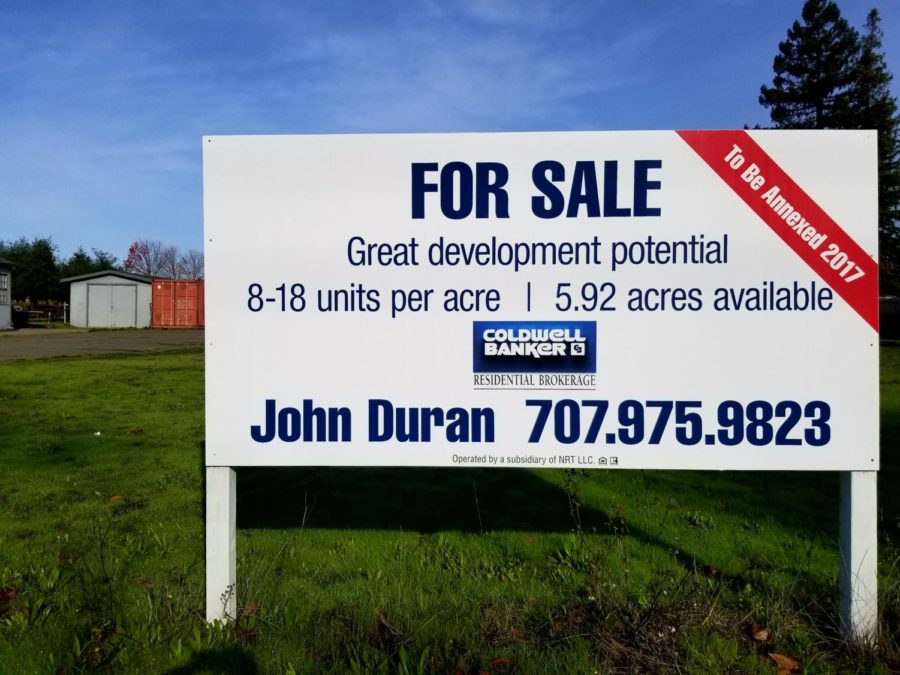 A real estate sign on Sebastopol Road, touting the recent annexation of Roseland as a selling point.

There’s a neighborhood in Santa Rosa that once existed within a bureaucratic purgatory realm. The neighborhood is part of a 715 acre, concrete chain of five islands, situated inside Sonoma County yet outside of any city limits. It’s an area considered to be more urban than its surroundings, with a highly concentrated population forming a residential nucleus.

The United States Census Bureau defines these areas as a Census Designated Place or CDP for short. The locals in Santa Rosa have a somewhat more appropriate and endearing term for the area. They call it: Roseland.

Roseland, located just minutes south of downtown Santa Rosa, is now “officially” part of Santa Rosa following a successful vote to annex the neighborhood into the city, in which only 44 voters and 41 property owners filed formal objections.

The vote to annex Roseland is the culmination of an initiatives undertake by various city and county officials over the course of the past ten years. The Nov. 1 approval increased Santa Rosa’s population by an estimated 7,400 residents.

In Roseland, goats and sheep graze in the yards as taco trucks and tamale stands grace the streets. This population of farm animals and Latino vendors have been at the heart of Roseland for decades. Following the recent annexation, residents question whether or not city-implemented and developer-driven changes will force Roseland to have a change of heart, so to speak.

“We want to maintain the character and culture of that area, but we will prioritize infrastructure that will be needed,” said Jessica Jones, Santa Rosa’s supervising planner.

Due to its long-standing designation as a census designated place, Roseland has gone decades without the benefits of improved sidewalks, roads and commercial development.

Glen Salazar, Roseland resident and student success technician at SRJC’s Southwest Center in Roseland, knows this all too well. “It kind of feels like we’re in a Third World country here with the roads and infrastructure,” Salazar said.

Santa Rosa is slated to receive $12 million from Sonoma County to offset the cost of improved roads, parks and other basic municipal needs for Roseland. In 2015, a city report estimated that it would cost Santa Rosa upwards of $80 million to bring the neighborhood on equal ground as the rest of the city.

With improved infrastructure comes increased costs for the city to cover the balance. Who will pay these costs and how is a concern for Roseland residents.

“The biggest questions we get are ‘what is going to cost me?’ Are my taxes going to go up?’” Jones said.

The city has assured residents that property taxes will not increase as a result of the annexation, however it will implement new taxes and fees. The city added a five percent Utility User Tax to the cost of monthly utilities PG&E provides.

Garbage and recycling services will also increase for 2018, the current charge for a 32-gallon can is $17.05, effective January 1, the new rate for a 32-gallon can will be $26.85 per month. Taxes such as these are estimated to add up to more than $220,000 in new revenue for the city, a number that will increase annually.

For the majority of Roseland’s low-income families, the increase in the aforementioned taxes and fees—although incremental—can place an added strain on financially strapped residents.

“I think residents will definitely be affected with the regulations and the taxes,” Salazar said.

Along with taxes and fees, another increase Roseland residents can expect to see is the development of desperately needed housing, which is already underway. The county has long struggled with a massive housing shortage, exacerbated by the recent and unprecedented North Bay wildfires’ devastation.

“We’re not going to focus our housing efforts in Roseland,” Jones said. “We want to distribute to equally. However, the housing is developer driven.”

A San Ramon-based Lafferty Communities development site named Blume is currently underway on Sebastopol Road and advertises 51 single-family-residences ranging from 1,355 to 2,450 square feet and 16 townhomes from 1,368 to 1,600 square feet.

The company describes Blume as being “…in the urban heart of the wine country, an area with a vibrant culture waiting to be explored.”

A stone’s throw down the road from Blume is another billboard located near Brittain Lane advertising close to six acres offered at $2,395,000. The Coldwell Banker billboard touts the location as having “great development potential” at 8-18 units per acre.

“I’m happy we are finally part of Santa Rosa, but this is five months too late. I would have voted for Measure C and I’m worried that because it didn’t pass, those of us in Roseland will be negatively affected.”

Measure C, which would have implemented rent and eviction-control ordinances in Santa Rosa, was rejected by 52.5 percent of the voters at the ballot box this past June.

Devin Cardenas, co-director of the North Bay Organizing Project, was one of many advocates pushing for Measure C to pass. Cardenas believes Sonoma County is the next domino to fall in the Bay Area’s losing battle against gentrification and the ongoing housing crisis.

“There’s been push out happening across the county due to the rising housing market and greedy landowners,” Cardenas said. “I think low-income, multi-family unit housing will be crucial. We need to make housing on public land accessible to working-class people.”

Cardenas points to Sonoma County’s recent SMART Train as one of the possible factors in the displacement of residents.

“Public transportation projects like the SMART Train can be synonymous with the push out of low-income, working-class residents.”

Research from a joint UCLA-UC Berkeley Urban Displacement Project on gentrification and displacement in urban communities revealed that from “2000 to 2013, neighborhoods near light-rail or subway projects are more associated with increases in white, college-educated, higher-income households and greater increases in the cost of rents.”

The findings stated, “Conversely, neighborhoods near rail development are associated with greater losses in disadvantaged populations, including individuals with less than a high school diploma and lower-income households.”

The study acknowledged that, “The impacts vary across locations, but the biggest impacts seem to be around the downtown areas where transit-oriented developments interact with other interventions aiming to physically revitalize those neighborhoods.”

The SMART Train is receiving praise for rejuvenating the businesses in Santa Rosa’s downtown Railroad Square with its 7 Fourth Street station. The Railroad Square station is one of three stations in Santa Rosa, with the others located at the Sonoma County Airport and off of Guerneville Road in North Santa Rosa. Unsurprisingly, there are no stops in Roseland.

“People in Roseland need to form a voting block to push the city to give low-income families access to public transportation, better wages and rent protection,” Cardenas said.

For Roseland residents, the annexation finally allows them the opportunity to get involved and vote on initiatives directly affecting them. Yet, a majority of the nearly 60 percent of Latinos who call the neighborhood home may not have the privilege of voting because of their legal status.

Without the security blanket of rent control, the fear of price gouging and rapid development has some Roseland residents leery of the future.

“I’m worried there’s nothing to stop the cost of living to go up higher even though wages aren’t going up” Martinez said.

Other residents choose to look at the potential benefits future development can bring to the area.

“People might be resistant to the change because they like to do things traditionally,” Salazar said. “If there’s more housing, then more people might enroll in the Southwest Center campus.”

A SRJC faculty member, who chose to remain anonymous, is concerned for the impact on the cultural and ethnic makeup of the neighborhood, worrying that Roseland could be on its way to suffering the same fate as San Francisco’s Mission District.

“Is Roseland going to be the new hip place to kick it?” the resident asked. “Where the tacos are organic and cost $5 and the Mexican Market becomes a fair-trade coffee shop?”

The Roseland Community Village shopping center on Sebastopol Road appears to serve as ground zero for the ongoing revitalization efforts in the neighborhood, with a city planned event called “Roseland Community Celebration” scheduled to take place there on Jan. 20, 2018.

Event planner and Roseland resident Jake Ward, the man behind the first ever “Roseland Community Festival” that took place on Oct. 1, has volunteered to assist the Community Advisory Board with the annexation celebration event.

“Some people living in Roseland don’t even realize what exactly is going on legally there,” Ward said. “Some of the residents wonder how retaining the unique cultural identity amidst being annexed is going to be possible?”

The city will “grandfather in” certain taco trucks, food vendors and livestock lots for longtime neighborhood residents following the annexation. However, this legal flexibility pertains to only one generation of Roseland’s residents, business owners and farmers.

“When I hear grandfathering in, I hear ‘you’re sustaining a generation,’ but long-term what happens for Roseland? How many more years do we have of the culture and energy it has right now?” Ward said.

In 2007, the Sebastopol Road Urban Vision Plan proposed a tree-lined plaza housing mixed-use buildings, a grocery store and acres of newly developed parks for families in and around the Roseland Community Village shopping center.

Ten years later, there’s no tree-lined plaza, just a Dollar Tree. No mixed-use buildings, only the Roseland Community Library, which may not be open past June 2018 depending upon its budget. The new grocery store is the same one that has always been there, Camacho Market. And as for acres of newly developed parks for families, behind the Dollar Tree is Remembrance Village, a newly developed encampment of more than 100 homeless recently uprooted from highway underpass encampments downtown.

As numerous efforts and proposals to revitalize and redevelop Roseland into something bigger and better have come and gone, one constant remains: the resiliency of community members who remain loyal to a neighborhood that allows them to maintain their collective identity. This resilient identity is the beating heart of Roseland.

The recent annexation into Santa Rosa brings another round of even more ambitious development and revitalization plans to the neighborhood, leaving many in the community to wonder how long the heart of Roseland can continue to beat at the same rate it has for decades.