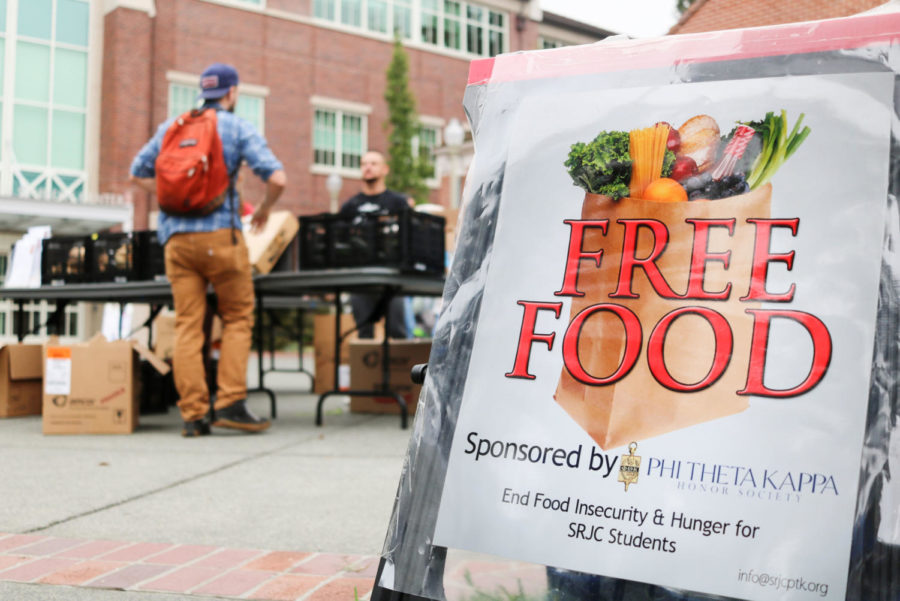 Mumphrey moved to Santa Rosa from Anaheim to play football for the Bear Cubs last summer and he commits at least 30 hours each week to practice, work-outs, team meetings and games.

That’s in addition to his regular academic work load. Players are required to take on at least 12 units each semester, although most take between 15 and 20.

Mumphrey doesn’t have the time to work and gets by on money he saved during high school. Sometimes this puts him in a situation where he has to choose between paying bills or buying food.

Mumphrey is one of an estimated 3,500 SRJC students affected by a plight much less visible but more pervasive than wildfires: hunger. According to a University of Wisconsin study of California community colleges, 13 to 14 percent of students face food insecurity, which means their ability to afford food is not consistent or reliable. Students suffering from food insecurity have to prioritize their educational goals and other basic needs over healthy nutrition.

“Sometimes their schedules are so crazy,” said football coach Leonard Wagner. “They’re going from one thing to another without a chance to get food. But I think the challenge for our student athletes is more that they don’t have the money to eat. They’re trying to live with very little food.”

Wagner’s hands are tied by NJCAA guidelines that prevent him from giving financial assistance to his players, but he tries to connect them with services that are available to all students.

He believes the problem of food insecurity is a wider issue on campus, affecting more than student athletes. “I think it’s pretty severe on our campus,” Wagner said.

Although SRJC has not conducted a scientific survey specific to food insecurity, a third of respondents reported that financial problems and pressures from employment were barriers to staying in college, according to a survey the Office of Institutional Research conducted in 2016.

DeAnna Rogers, head of the Basic Needs Resource Center in Bertolini Hall, works with Student Equity to help give students access to services that may help ease their financial burden. Providing access to resources is an easy way to decrease food insecurity and increase enrollment retention.

“The cost of living in Sonoma County keeps getting higher and higher,” Rogers said. “It’s not just students but faculty who have to make tough choices when everything is this expensive.”

Rogers worries that as the cost of living in Sonoma County continues to rise, financial pressures will force prospective students to abandon their educational aspirations for the workforce. SRJC has faced a decrease in enrollment in recent years and the full effect of October’s fires on enrollment remains uncertain. Providing more help to students who struggle with food insecurity and meeting other basic needs may be a way to prevent further drops in enrollment, which negatively impact the school’s budget.

As a member of the Black Student Union, Sabrina Rawson provided free meals to student athletes. As student trustee, she has worked with Phi Theta Kappa (PTK) and the Student Government Assembly (SGA) to expand food banks on campus.

“If you’re in danger of not being able to pay your bills, there is no way you’re going to be able to afford the books, transportation, tuition and food,” Rawson said. “Food is the most expendable item when it comes to providing for yourself.”

Shannon Deller, 18, is a psychology major struggling with food insecurity. “I choose to pay for rent, my phone bill and bus fare over food. I’m hungry all the time, but I’ve kind of gotten to a place where I’m like, ‘Well, I can’t eat.’” Despite this, Deller and her roommate, nursing major Cat Williams, 20, don’t take advantage of services SRJC or the community offer.

“We go to cheap grocery stores like Grocery Outlet. Our food staples are rice, tortillas, cheese, noodles and cereal,” Williams said. “We’ve been talking about food stamps—we need to get on food stamps.”

Nurse practitioner Cynthia Dickinson tries to get students connected with the many services available to help them cope with food insecurity through SRJC’s Student Health Services.

“I was surprised when I came to the college to find that students had not eaten until 2 p.m. They were coming into the health center feeling pain in their stomachs,” Dickinson said.

“They hadn’t eaten that day because they didn’t have food. It was mostly towards the end of the month because they were living month-to-month or on some kind of stipend.”

Dickinson said most students are not aware of the benefits they can receive from the state’s CalFresh program, which can provide qualifying applicants with up to $200 each month for food. Only a quarter of students referred see the process to the end. Dickinson also directs students to food banks on campus, including one that her office operates on the Petaluma campus. In addition to the food banks SGA and PTK operate in Santa Rosa, campus food banks serve an estimated 500 students each week.

Student Ambassador Will Coole said students rely on the food bank he works at in Petaluma. “There were people who came to campus specifically for this,” he said. “We’ve got a few people who are getting food for their entire family for the week.”

Students can find resources for dealing with food insecurity at Student Health Services and the Student Resource Center. SGA has taken steps to work with clubs and other campus organizations to create a permanent food pantry available to all students throughout the week.

Nursing major Natalie Hernandez, 33, is no stranger to hunger. “I’m a single mom and food insecurity is actually the story of my life,” she said.

She is grateful for SRJC’s resources, including the food banks, but she acknowledged for a lot of people struggling, it is difficult to talk about.

“People are embarrassed and no one knows what you’re going through or what to say or what to do for you,” Hernandez said.

“People get ashamed. But for people who go through it, every little bit helps and is appreciated.”

For former SRJC student Ben Gruey, 29, the sacrifices he made paid off. Gruey was enrolled at SRJC full-time from 2011 to 2014 when he was homeless. He slept on rooftops and dumpster-dived to sustain himself while he pursued his academic goals.

Gruey went on to UC Santa Cruz where he completed undergraduate degrees in computational mathematics and applied physics. He is currently in a master’s program and plans to go on to complete his Ph.D.

“I thought, ‘I can stay in school or support myself with a job,’” Gruey said. “I chose to stay in school because I knew it would get better later on. Staying home and being homeless and not having any food was taking a step forward.”

Gruey didn’t take advantage of services the administration offered due to the stigma attached to asking for help.

Only a handful of peers and instructors knew about Gruey’s situation. “Most of them didn’t know. I think in general the student body around me didn’t know or wouldn’t have guessed,” he said

Sophie Ammerman, 18, is a member of PTK and helps out at one of their club-sponsored food banks. She agrees that stigma is a major barrier to helping the food insecure, who may be suffering needlessly.

“I grew up food insecure, and whenever I needed food, I was really embarrassed to ask about it. I totally understand where they’re coming from.”

David Goodman, director of the Redwood Empire Food Bank, which partners with SRJC to provide food distribution on campus, agreed.

“Stigma is the biggest hurdle for everyone. Suddenly you find yourself as an adult and the only way you’re going to get food is if somebody feeds you. Our society, especially these days, has this myth that if you go to school, get a job, and work hard, everything will be OK, but the fact is that’s not true,” Goodman said.

Goodman believes the problem of food insecurity, including the stigma around it, is due to its lack of visibility.

“So many things have led to a person being in the situation where they go hungry. One out of seven people is food insecure, but they’re invisible. Hungry people look like you and me,” he said.

Goodman sees the problem as solvable if institutions like SRJC step up to deal with it. “They could be doing more—I don’t think they’re doing anything right now. You’ve got a couple people helping fellow students out, but that has nothing to do with the JC. You can provide people with nutritious meals for very little.”

Mumphrey is grateful for the food pantries and CalFresh benefits he takes advantage of. Despite the NJCAA’s rules, Mumphrey said he has one more place to go if he needs help.

“Coach Wagner’s doors are always open for us, so that’s another good resource,” Mumphrey said. “He always says, ‘If you need food just come on in.’”