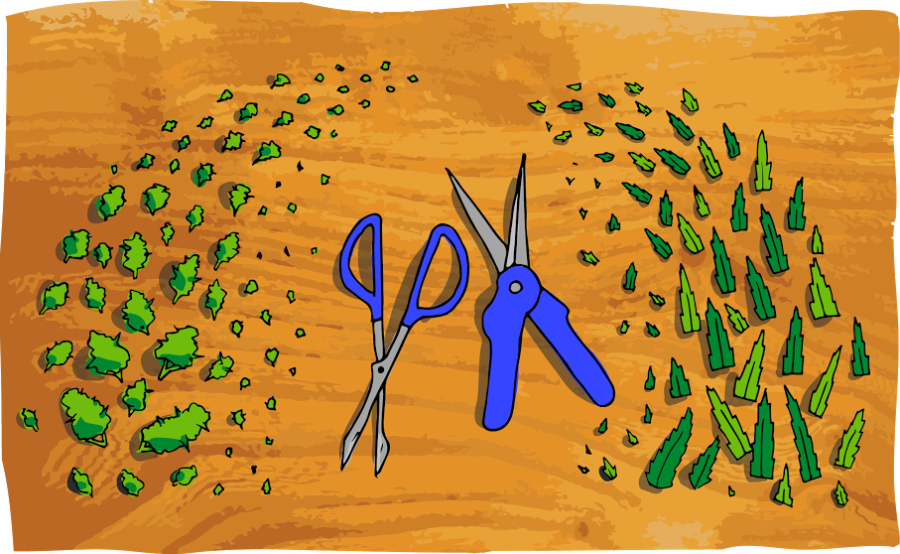 Scissors and Fisakrs: the tools of the trimmer trade.

As fall continues, you’re bound to see more hitchhikers waiting with outstretched thumbs at freeway entrances headed north in search of harvest work. Many are young adults with a lust for green of both kinds.

One plant in particular draws people from all over the globe to three counties in Northern California known as the Emerald Triangle; Mendocino, Humboldt and Trinity.

Every fall, hundreds of seasonal workers traverse to these counties hoping to gain jobs in a budding industry as seasonal cannabis trimmers. It may seem like an unconventional job to some, but many desire it for the high pay, sense of adventure and love of marijuana.

The process of trimming includes pruning dried cannabis stalks of the non-psychoactive leaves to reveal THC-encrusted marijuana buds. For locals and college students in the Emerald Triangle, this work can help make ends meet.

Trimming was a gratifying source of income for former Santa Rosa Junior College and Humboldt State University student, Joey, 26, of Santa Rosa, who did not want his last name used, because he earned money doing something he’s passionate about.

For five fall harvests, Joey made his way into the forested hills hidden within the Emerald Triangle to trim for local growers.

“I lived in Arcata. It’s a small community and chances are your friend grows,” Joey said.

In the underground world of cannabis production, pay is dependent on how much one can trim. A typical pay rate is roughly $200 per pound of marijuana trimmed. However, in more recent years, $150 is the average for a day’s wage.

In addition to cash payments, some farm coordinators offer food, alcohol, camping land and generous amounts of marijuana to smoke.

“I was lucky enough to see some of the last of the ‘outlawish’ spots. e whole trim scene won’t be the same in another five to 10 years,” Joey said.

Not all aspects of underground cannabis production are as pleasant as the pay and camaraderie.

Trimmigrants often camp outside on grow properties and face weeks of rain or sweltering heat, as well as the wildlife in the area.

“My biggest freak-out was a bear that was right by my hammock eating trash. I thought it might eat me.” Joey said.

No longer bearing the wilderness, he now works in the cannabis industry as a budtender at a local dispensary and credits his knowledge of cannabis and its production to his experience as a trimmer.

To trim legally, most collectives ask for a medical marijuana license. Proposition 215, the Compassionate Use Act, was passed in 1996 and enables people 18 years and older to purchase medicinal marijuana from licensed dispensaries. After 20 years of medicinal marijuana production under Prop 215, a new resurgence of cultivation regulations have come with the passing of Proposition 64.

Voters passed Prop 64, the Adult Use of Marijuana Act, in 2016. It allows for recreational marijuana use among people 21 and older. With this new expansion and regulation the demand for cannabis-related jobs in this prosperous industry has increased.

Now students can find jobs even closer to home than the Emerald Triangle. For third-year SRJC student and first-year trimmer, Shannon Strawn, 21, work is as close as Penngrove.

“My good family friends own the collective I trim for, I had been babysitting their kids, but they told me I could trim instead if I wanted,” Strawn said.

She works in what she says are safe conditions—in a friendly environment where employees are able to converse, listen to music and smoke.

In the regulated sector of cannabis production, trimmers like Strawn average nine-hour weekday shifts with common starting rates of $15 an hour.

For others who are pursuing independent careers, the cannabis industry is a great way to branch out and network.

“Working in the cannabis industry has been a blessing,” said Ariel Aum, 21, a bud- tender and patient consultant at Redwood Herbal Alliance. “You meet so many great people at the dispensary, it’s definitely a great chance to network and create connections.”

Aum is putting her income from work at this local dispensary towards cosmetology school.

The financial opportunities cannabis offers are endless, not only for the younger generations but also for those who grew up in the cannabis subculture of the ‘60s and ‘70s.

In a predominantly millennial-led industry, Patti Silva, 60, an event and office manager at Sonoma Patient Group, began work at this local dispensary after a few harvests. Silva trimmed for friends in Santa Rosa and Lake County in 2013 and 2014.

While she doesn’t trim anymore, the 40-plus-year cannabis user found a new passion through the cannabis industry. Silva was able to carve a path in a new career due to her knowledge of cannabis and previous experience as a trimmer. “I love my job! It has allowed me to start a new career at the age of 59,” Silva said.

In the recent Northern California wildfires, Silva’s work experienced a financial hit during a four-day evacuation period and subsequent power outages. “Business has been slower the past few weeks,” Silva said.

Although the fires caused setbacks to this year’s harvest, the cannabis industry continues to expand. Countless job opportunities will develop, not only just for millennials, but also for baby boomers who desire to start new careers.