Canevari’s off the menu special 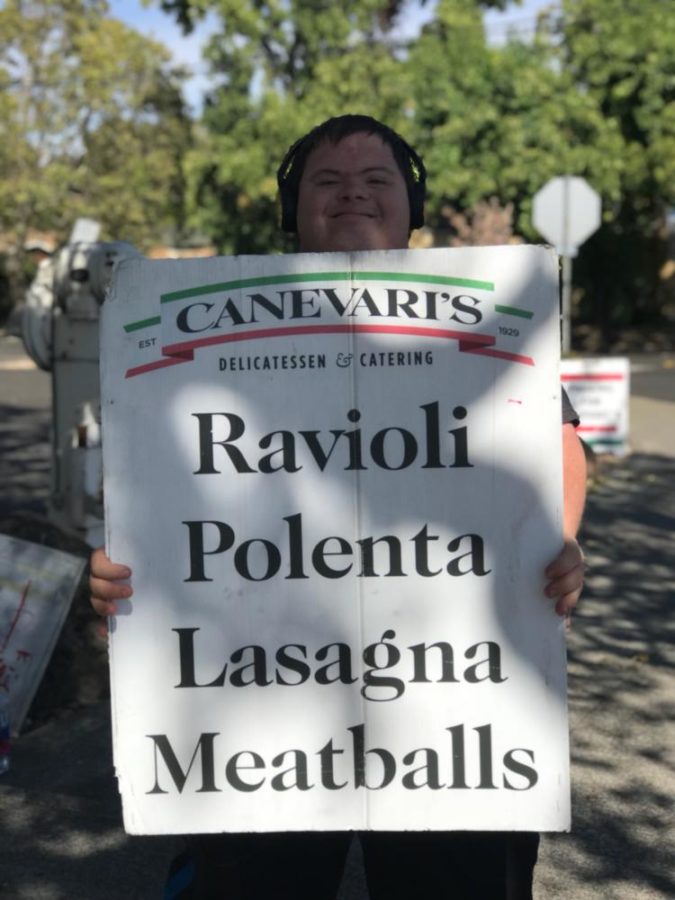 Chadwick Tatum, 30, is one of three sign spinners employed at Canevari's Deli in Santa Rosa.

It’s Friday at Canevari’s Deli, which means it’s Italian cheesesteak day. Canevari’s cheesesteak is a construction of gooey cheese, finely sliced beef and fresh peppers. It’s one of the best sandwiches in Santa Rosa and it’s only available on Fridays.

Canevari’s offers another special on Fridays, something off the menu; a trio of ingredients not found behind the deli counter. Rather they are found outside the venerable Italian eatery and go by the names of Asher Cairo, Chadwick Tatum and simply, O.G.

Collectively, they’re the sign spinning superstars strutting their stuff up and down Lewis Road and Mendocino Avenue.

Cairo, 26, is a unique entertainer with an eccentric flair. Tatum, 30, lives with down syndrome and O.G., 40, is a recovering addict. The trio utilizes these aspects of their personal lives to create the most entertaining and effective sign spinning trifecta in Sonoma County.

Cairo has been spinning signs for a few years now.

“I used to be a dancing pickle and then I was a dancing cow,” Cairo said.

For Cairo, spinning signs is more than just a fun way to earn some quick cash, it’s a way of life.

“What I do is a job and I’m passionate about it. I get applauses and some tips, and sometimes I get flashes.” Cairo said. “Most people tell me, ‘you’re not going to be a sign spinner all your life,’ but if you enjoy what you do then why not take that chance.”

Cairo, has an affinity for music and dancing, two passions he utilizes to his benefit when sign spinning:

“I can express myself and bring a smile to people’s faces,” he said. “I usually do a spin or pretend like I’m walking to the store with a bag.”

Cairo’s choice of music when doing his job consists of, “Cher, Madonna and pretty much anything 80s’.”

For Tatum, his musical choices are Michael Jackson on his CD Player and Adele on his iPod, the latter serving as a backup when the former runs out of battery.

His reasoning for spinning signs is simple.

Living with down syndrome limits a person’s options when entering the workforce, but Tatum isn’t allowing the diagnosis to prevent him from earning a living.

“I do this for five hours a day and four days a week I work at Amy’s Drive-Thru, cleaning the lobby and taking out the trash.”

Despite his disability, Tatum has career aspirations that go beyond spinning signs and taking out the trash. “I want to be a wine taster, jiggling the glass around and slurping the wine, that’d be really cool,” Tatum said.

O.G. is the veteran of the group, a recovering addict who will tell you he’s been sober for a year and 223 days to be exact.

O.G. has been spinning signs for over 20 years.

He admits living as a sober sign spinner isn’t easy, but it is rewarding.

“Sobriety is a bitch, it get’s boring, but I like getting out here and bringing positivity to people who are having shitty or fucked up days,” he said.

His positivity hasn’t touched everyone he’s attempted to reach. Canevari’s was the recipient of an angry tirade by one passerby who noticed O.G. one day.

“We had someone call us and tell us: ‘this is 2017, you should not have a black man spinning signs, are you selling chicken and watermelon? You should have him do something worthwhile,’” said Canevari’s manager, Vincenzo Chambrone.

“Some people just don’t understand, they look at our sign spinners and think we subject them to standing out in the heat for little pay, but they came to us because it’s something they love doing.”

Lou Chambrone, the current owner of Canevari’s, whose heart is as full as one of his homemade raviolis, took on the gamble of employing the unique personalities.

“They are the only advertising I do,” Lou Chambrone said. “They came in right off the street looking for work. They don’t get a whole lot of breaks in life so I’m happy to help.”

Chambrone’s decision to employ the three sign spinners right off the street raised some concerns.

“At first I was pessimistic about it, but there are people who come in every Friday because of the sign spinners,” Vincenzo Chambrone said.

“I get calls from people saying our sign spinners put a smile on their face and made their day,” Vincenzo said.

The novelty of employing sign spinners to promote a business or spread the word on a particular issue is nothing new; the practice dates back to 19th century London where citizens took to the streets to protest taxes.

Charles Dickens even once described those advertising with signs as, “a piece of human flesh between two slices of pasteboard.”

The men spinning signs for Canevari’s Deli are far more than simply flesh and bone, they are complex individuals providing valid contributions to the world around them, despite often being dismissed as nothing more than a human billboard.

Much like the old-world style, family-owned Italian delicatessen that is Canevari’s, the art of sign spinning is a novelty that appears to be in short supply in the modern age. Regarded as relics of past generations, antiquated institutions in dire need of upgrades by future generations in the digital age.

However, like the mouthwatering sandwiches, pastas and raviolis found in Canevari’s Deli, the talents of Cairo, Tatum and O.G. prove that there’s always a place in this world for a deli that can serve up a savory, homemade, Italian cold cut and a person who can serve up a unique and stylized sign spinning routine to go with it.