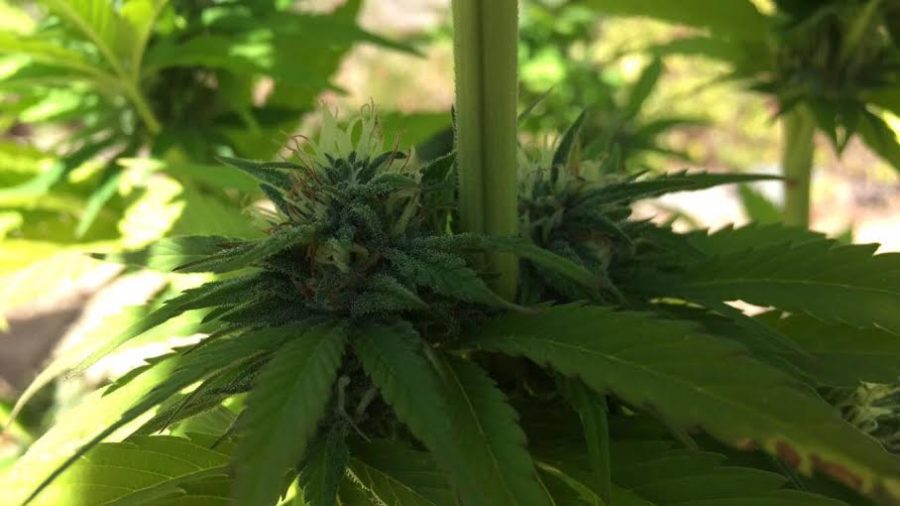 Marijuana plant during its flowering stage. It will soon be harvested and trimmed.

With the expansion of legalized marijuana throughout the nation comes the challenge of making cannabis more acceptable in a society that has long been against drugs.

In the 2016 election, seven states legalized either recreational or medicinal cannabis.

California was among those states to legalize recreational marijuana with the passing of Proposition 64, the Adult Use of Marijuana Act, which allows people 21 and older to purchase regulated cannabis from licensed dispensaries.

Along with legalization comes the dismantling of cannabis’ stigma, mostly lead by the nation’s young adults, including Santa Rosa Junior College students.

In a 40-year long study on drug use in “Monitoring the Future,” published by the University of Michigan, data shows that marijuana consumption among people in their 20s is on the rise, while the use of illegal drugs like cocaine and amphetamines is on a decline in comparison to people in their 40s and 50s.

Marijuana users o en won’t reveal their use because it’s more acceptable to have a drink than to light up. Fear of judgment and repercussions at work also motivate some to keep their usage private.

It bothers some students that cannabis is still less socially acceptable than alcohol.

“I have friends who smoke weed everyday, all day and they are some of the most successful people I know,” said Juana Nunez, 21, a Santa Rosa Junior College student and former cannabis smoker.

Nunez used cannabis to help soothe anxiety and depression as well as to relax and sleep but stopped in March. She initially slowed her intake to curb her tolerance.

Since her medical marijuana recommendation expired, she quit smoking altogether. “I will go back to smoking when it becomes recreational in 2018, but only CBD to help with my anxiety and pain,” Nunez said.

Cannabidiol, or CBD, is the non-psychoactive element found in cannabis that can be used for pain relief, anxiety and more. e more popular side of cannabis is tetrahydrocannabinol, THC, which is the psychoactive element of the plant. The human frontal lobe is not completely developed until the mid- 20s. So consuming cannabis regularly can have detrimental effects on cognition, which controls aspects like intuition, judgment, emotions and problem solving.

Contrary to marijuana user stereotypes, Nunez did not see a negative impact on her ability to perform in school and has maintained a 3.3 GPA as of last spring.

Cannabis can also have beneficial effects on reducing body pain.

At a young age, Cassie Beltran, 23, a kinesiology major at SRJC, was diagnosed with Attention Deficit Hyperactive Disorder(ADHD) and anxiety. She was prescribed countless pharmaceutical drugs that left her feeling like a shell of herself.

After obtaining a medical marijuana card, she felt like she could finally alleviate her symptoms safely without
the side effects of prescription drugs.

Beltran is a 15-year Kempo Ju Jitsu athlete who also has four and a half years of Judo experience. These hobbies have led to her fair share of injuries, including a broken spine and subluxed shoulders. Cannabis not only helps with her ADHD and anxiety, but also with the physical pain she has endured.

“It’s great after a hard training session when my body is bruised and sore,” Beltran said.

Cannabis, a staple drug in college culture, not only relieves anxiety symptoms but can also ease stress levels.

“I think most students these days treat it like beer,” said Joey, 26, a dispensary worker and cannabis connoisseur. “It’s a way to de-stress a er nals or to keep themselves from going crazy with the day-to-day stress.”

Millennial smokers as a whole are on the forefront of a new acceptance movement by creating and partaking in cannabis careers in this expanding industry.

“Millennials hold a majority of cannabis-related jobs these days, Joey said, “I personally don’t work with anyone over 35. Cannabis is giving economic power to millennials.”

Yet, the stigma behind cannabis remains strong among older generations who grew up during the “Reefer Madness” scare from the late 1930s into the ‘50s, and with those who lived through the “Just Say No” campaign led by First Lady Nancy Reagan in the ‘80s.

For some on campus, there are still concerns about the use of cannabis as a form of medicine.

“I might be a little biased, but I don’t think that it’s good to use in any way,” said SRJC Nurse Practitioner Kit O’Neill-Conover.

O’Neill and her family were impacted by marijuana when her younger brother began smoking at age 12. He later dropped out of high school to begin work with someone who sold cocaine and marijuana. Eventually, he began making methamphetamine and subsequently spent time in prison.

“I’m sure there are people who can use it recreationally, like alcohol, and be perfectly safe,” O’Neill said, “I’ve never had anyone come to me saying that they felt like they had a problem.”

The movement toward cannabis acceptance and normalization is also led by colleges, which are historically known to be centers of cultural change. Sonoma State University has plans to expand its cannabis seminars into a complete certicate course.

While SRJC offers plenty of courses that cover the wine industry, and more recently courses in brewing beer, the school still has yet to release courses in cannabis education and production.

He said the school has discussed plans with Sonoma County Growers Alliance and CannaCraft for a cannabis certificate program. Despite some pushback from older generations, the stigma behind cannabis and its users is slowly being dismantled by a new generation of smokers who are leading productive lives and positions in the cannabis industry.