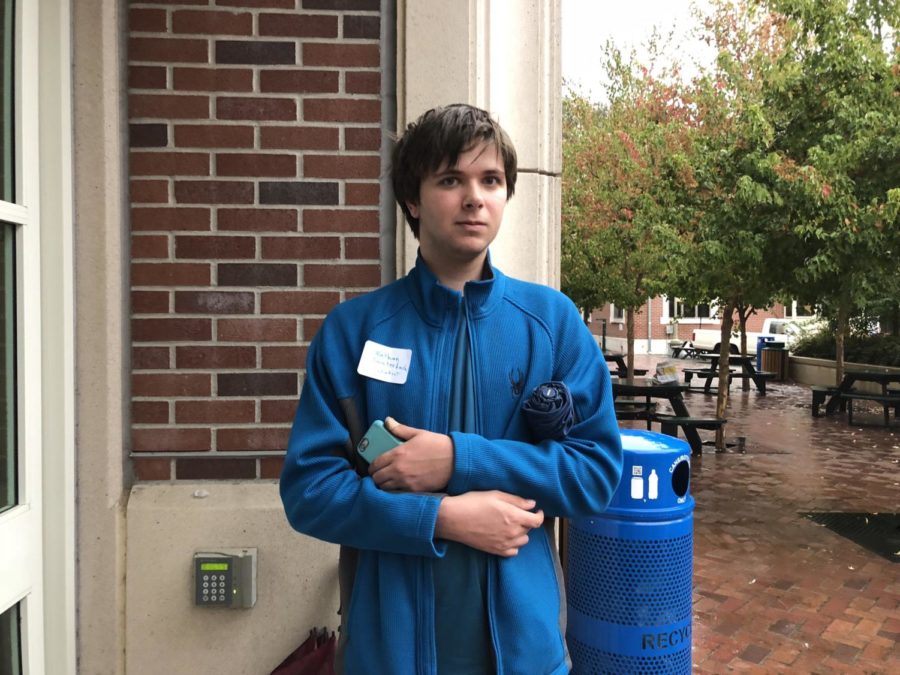 SRJC student Nathan Lauterbach doesn’t recognize the hill where his family home once stood. The entire landscape was destroyed by the fire, along with his neighborhood. PC Rachel Edelstein

Nathan Lauterbach smelled smoke as he was getting ready for bed around 10 p.m. on Oct. 8. He was at his family’s home on Heights Road east of Larkfield. He checked CAL FIRE, but its map showed the fire was far away, so he went to sleep. At 1 a.m. his mom woke him; they had to get out.

There were sparks flying, and they could see the glow of the fire.

“I grabbed my wallet, keys, some clothes, my Nintendo DS. I threw my cat in the car. When I opened the garage door, I could see fire coming straight towards the house,” Lauterbach said. “As I drove away, there was fire on both sides of the road.”

His parents both made it out in their separate cars, although his dad’s truck caught on fire on the road, forcing Lauterbach’s father to abandon it and have his neighbor pick him up.

“I got to my parent’s vineyard in just my underwear and socks and waited there for my parents,” Lauterbach said.

He described hearing explosion after explosion echoing through the valley all morning long. He thought they would have to evacuate again.

Lauterbach and his parents are staying in a trailer on their vineyard for now and must go to friends’ houses for dinners and showers.

Lauterbach has a lot of questions, specifically, why the county didn’t activate the emergency broadcast system. At this point, he says he’s looking for something to explain to him why the regular alert systems didn’t work.

On Oct. 22 Lauterbach found they’d lost their home. He went to see what was left, but the rubble was too dangerous to walk through. He was able to find a page from his old high school yearbook.

“The only way I can describe how I feel is sad,” Lauterbach said.

It’s changed his perspective on disaster preparedness, and he is now concerned that the hillside where his home once was is in danger of mudslides when the rain comes this winter. He’s uncertain what the next few months will hold.

“I’m not sure if I’ll continue with school,” Lauterbach said. “I’m still in shock. I forgot my backpack. I lost all my notes and textbooks. I’m taking five classes this semester.”

The changed landscape is just as jarring as the loss of material possessions. All the trees are burnt and the undergrowth is gone.

“It’s hard to recognize the hillside where I grew up,” he said. “You can’t see any of the landmarks anymore. I don’t know what to do. It’s amazing and terrifying.”