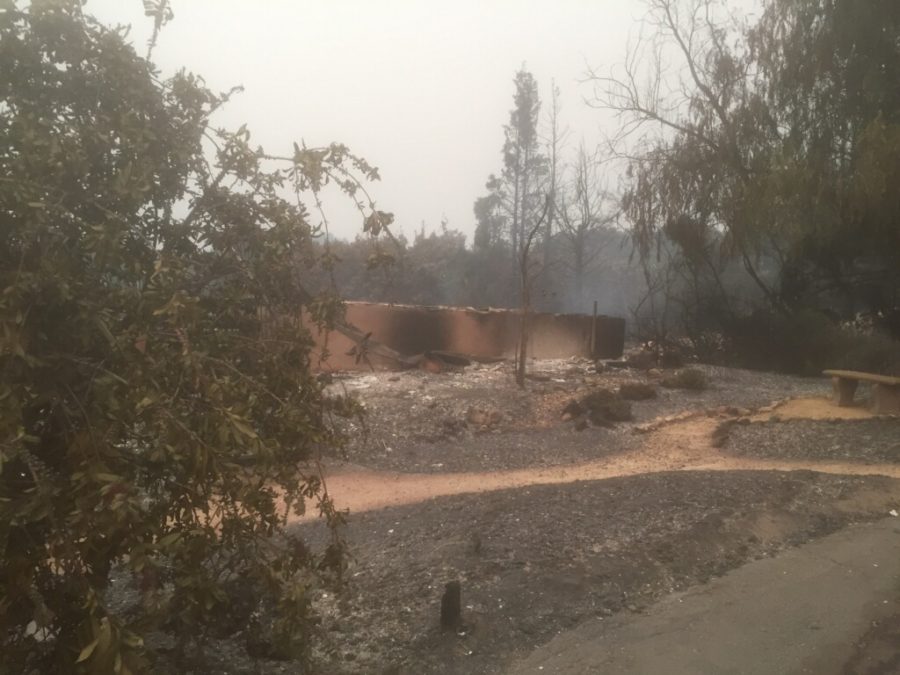 What some Sonoma County locals lovingly refer to as “God’s country” now resembles a Devil’s playground; a hellish wasteland of ash, smoke and persisting flames.

The North Bay wildfires’ scope of destruction is unprecedented. An estimated 88,000 acres have burned, and at least 21 lives were claimed to date by the wildfires. Officials expect the numbers to rise as more information is collected in the days following the disaster that began late on the night of Oct. 8. As ash continues to fall, harrowing stories of evacuation emerge.

Adams and hundreds of other SRJC students, faculty and staff faced a terrifying crisis in the middle of the night as they evacuated their homes to escape the raging Tubbs firestorm. The fire started in Calistoga near Tubbs Lane and swept through several northern Santa Rosa neighborhoods before jumping Highway 101 and razing the Coffey Park neighborhood north of Piner Road.

Adams had just fallen asleep after studying when he was awoken by a knock on the door. “I found out at 1 a.m. My landlady said the fire department called telling us we needed to evacuate in the next five minutes,” Adams said.

Adams, a foster child, stuffed only his class textbooks and two changes of clothes in a backpack and raced into the night on his Honda NC700X adventure bike, unsure of where he was headed and of what exactly he was escaping from. Operating with little rest and scarce information, Adams found himself in the middle of a traffic jam near his Larkfield-Wikiup home. Despite the maneuverability a motorcycle offers, Adams was trapped by vehicles as countless evacuees flooded the roads to escape the blaze.

“I didn’t know the conditions of anything. It was horrible,” Adams said. “I was breathing in all the dust and ashes from the fire on the 101 by the Hopper area.”

The toxic potpourri quickly infiltrated Adams’ lungs, causing him to vomit in the middle of the gridlocked traffic.

“I was puking right next to cars that wouldn’t let me pass. Finally, one driver saw me and began shouting, ‘We have a motorcyclist here who’s puking! Let him through!’ and thankfully they cleared a path for me,” Adams said.

He eventually reached a friend’s house in southeast Santa Rosa, where he is now helplessly waiting out the ongoing disaster. “I just want to get back into my home. I’m afraid of looters and identity theft. I’m also worried about how the school is going to make up for the lost time with the midterm,” Adams said.

Not far from Adams, former SRJC dean and adjunct instructor, Ty Benoit, 68, returned to her home in the Wikiup area after a night at the Mill Valley Film Festival. She was still buzzing from seeing Sean Penn and Holly Hunter in person. Benoit was scheduled to moderate an SRJC panel for the play ‘It Can’t Happen Here’ on Oct. 11. A  10:30 p.m. call would change her plans.

“We looked at Calistoga and we could see the smoke. We packed our cats and a few things and headed towards Molsberry Market,” Benoit said. “When I left my home, I was pretty certain I wasn’t coming back to it.”

It didn’t take long for Benoit and her husband to realize their initial escape route to Molsberry Market needed to be abandoned. “We were driving right into it. Everyone else was driving the other way,” Benoit said. The couple eventually made it to Windsor, where Benoit said, “We were literally breathing our house with all the ash in the air.”

A few days later, a neighbor of Benoit’s showed her a photo, taken from a phone, that confirmed her fears: her house burned to the ground. “It was like the Kennedy assassination or 9/11. I will always remember where I was at that moment when I got that news,” she said.

In another section of the city, the flames encroaching upon the Coffey Park area spread quickly, rapidly growing in size. The flames would eventually wipe out an entire block of homes, leaving an area of Santa Rosa resembling a war zone. “It was surreal. I saw the back of the house, and it was glowing orange,” said Anetra McCartney, 22, a first-year SRJC international student.

McCartney spent that Sunday afternoon at Walmart. “I was getting ink for my printer and some groceries. It was really windy and reminded me of a hurricane without the rain,” she said. McCartney is from the Bahamas, a place familiar with natural disasters in the form of hurricanes. “I went to sleep at 2 a.m., and at 3:30 a.m. my roommate knocked on my door. My roommate never knocks on my door.”

McCartney had minutes to assemble whatever she felt was important to take during the evacuation. “I don’t want to be the kind of person who thinks about material things so I took a change of clothes and my passport,” she said.

McCartney, who recently moved to Santa Rosa in December, had only her roommate in the car in front of her to guide her out of the inferno. “The farther away you drove, the more you could see, and all you could see was the flames. Some people in Sebastopol just parked their cars on the side of the road and watched the fire,” McCartney said.

McCartney, a center on the SRJC Women’s Basketball team, kept in touch with her coaches and teammates via group chat. Due to the campus closure, the team was unable to practice or train. “I’m starting to get concerned with the amount of junk food I’ve been eating and not being able to go to the gym,” McCartney said. “But I’m lucky. There are classmates I know who lost everything.”

On Sunday night, SRJC student Bee Ian Leonard, 21, spent time with friends on Hopper Avenue, engaged in ‘Shadowrun,’ a science-fiction, fantasy role playing game. Leonard wishes he had woken to a fantasy early the next morning. “I woke up, and I could see the fire right across the street,” he said.

As Leonard piled into a car with six other people and two dogs, a violent explosion spread fire to the house next to Leonard’s. Once on Highway 101, all Leonard could see was “a wall of ambulances and firetrucks,” and all Leonard could think was “I am in hell.”

Leonard lost his school I.D. in the evacuation, along with the majority of his personal possessions. “I have no way of getting to school reliably, and I have no way of paying the costs,” he said.

For residents of Coffey Park, the Tubbs Fire reduced lifelong memories to mounds of smouldering ash and rubble in a matter of hours. Second-year SRJC student Craig Lowry, 18, was among the residents sifting through rubble after the smoke cleared.

On a day when Lowry would normally be sitting in an air-conditioned classroom, he found himself laboring under a layer of toxic, dense smoke and shoveling the remnants of a friend’s home into a wheelbarrow to aid in the search for a fireproof safe. “This is something you don’t experience every lifetime,” Lowry said.

When the flames initially approached the Coffey Park area, Lowry grabbed his laptop and a change of clothes and evacuated to Cotati. The destruction of the blaze transformed hundreds from college students, faculty and staff members to victims of a natural disaster. The ongoing fallout from the wildfires that ravaged Sonoma county left more than 500 members of the SRJC community facing hazy and uncertain futures.

Some students are worried about how the school will respond to lost time during the semester while other students, like Lowry, don’t have the luxury of such concerns: “I’m not even thinking about school right now. This is bigger than that, and it’s not over.”

As the wildfires continue to leave a path of destruction, the response from the residents of Sonoma County is one of resilience and unity. “The support and generosity from everyone has been overwhelming,” Benoit said. “I saw a photo of a sign in Santa Rosa that says, ‘The love in the air is thicker than the smoke’.”