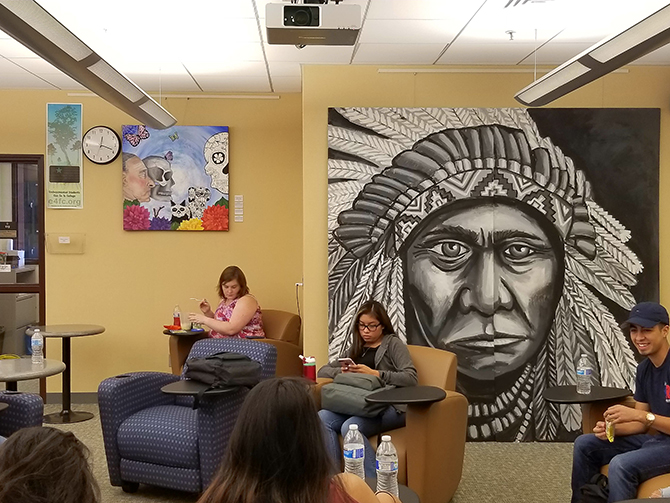 Our House, located in Petaluma, is the sister space to Mi Casa. Counseling services, access to computers and printers ,and access to a quit space are just a few things 'Our House' offers.

You’ve heard the phrase: “School isn’t for everyone.”

Usually this is uttered by someone who is no longer earning an education. However, even students who are in school–especially those who belong to low-income or minority groups–fall victim to this mentality all too often. These groups of pupils who attend Santa Rosa Junior College perform a complicated juggling act with their daily lives: attending class, holding down a full-time job, raising children and maintaining their sanity.

It’s easy for a student to become overwhelmed with the assigned workload, to get lost navigating the curriculum or never really find a place on campus where they feel like they belong and eventually drop out of school altogether.

Our House Intercultural Center, located at the Petaluma Campus aims to make the daily struggle easier to pull off.

Our House, the sister space to Mi Casa in Santa Rosa, opened their doors in room 116 of the John M. Jacobs Hall at the Petaluma Campus in the Spring of 2016. Our House serves as a study space/lounge where students can do homework, gain access to computers and printers, club meetings, workshops and have one-on-one time with counselors. More importantly than that, Our House is a place where underprivileged and disadvantaged students can go and not feel like an outsider on campus.

Ricardo Garcia, a Mexican-American student, has been coming to Our House almost since its inception, “I feel more comfortable here, it makes it easier for knowing deadlines and events coming up,” he said.

The Latino population on both the Santa Rosa and Petaluma campuses exceed the 25 percent demographic required to be designated as a Hispanic Serving Institution, making initiatives like Our House and Mi Casa much needed additions to the Santa Rosa Junior College campus experience.

This number is not lost on Our House Coordinator, Amanda Morrison, “It’s not a coincidence that it has that Latino flavor in here, but not exclusively.”

Morrison, who identifies as Chicana and holds a doctorate in cultural anthropology admitted that, “Latino students have claimed the space,” but wants students to know the space is for everyone: “It’s the living room of campus here. It’s a place that we’re trying to cultivate for everyone to feel comfortable.

Especially for people who have otherwise felt alienated in institutional settings.” Crystal Hotz, a member of the student success team and Our House regular echoed that sentiment. “I’m not Latino. I’m a part of the LGBTQ community and it’s very non-exclusive,” Hotz said. “I feel like when this first started coming out it was like a diamond in the rough. But, now it’s really starting to get polished.”

Mi Casa Coordinator, Malena Hernandez, who was born in Mexico and now has a double major in Anthropology and Spanish from Saint Mary’s College of California is aware of the difficulties facing students who have trouble adjusting to life on campus, “We want to make students realize that there is a place for everyone on campus, where you feel comfortable being a student,” Hernandez said.

Mi Casa and Our House are both working towards the same goal: improve retention among Chicano and low-income students who attend both Santa Rosa Junior College campuses. However, unlike Mi Casa, which has received federal funding through the Hispanic Serving Institution (HSI), Our House is funded through the Department of Student Equity, and unlike Mi Casa, Our House doesn’t benefit from being located directly on the Santa Rosa campus. This has proven to be a challenge for the space, “Petaluma has been thought of as a commuter campus for most of its existence, where you come in and out for your class, you’re kind of a solitary student just getting whatever units done and it’s not a strong sense of campus life or sort of cultural identity,” Morrison said.

One aspect Morrison believes will provide a greater sense of awareness and community at the Petaluma Campus is the impressive slate of diverse events Our House has scheduled for the fall: two spoken word and open mic nights on Sept. 13 and Nov. 15, a lecture on the commonalities between Mexican corridos and American gangster rap (which Morrison herself is giving) on Sept. 27 and a LGBTQ workshop on Oct. 3.

Like the low-income and minority students who make up a significant portion of the school population, Our House Intercultural Center is still growing and realizing exactly what it can be within the ecosystem of campus life, becoming a vital entity to the cultural enhancement and enrichment of the diverse landscape that is SRJCo. School may not feel like it’s for everyone, but Our House Intercultural Center is here to help quell those fears.

Our House Intercultural Center is located at 116 in the John M. Jacobs Hall on the Petaluma Campus and is open Monday to Thursday from 10 a.m. to 7 p.m. and on Fridays by appointment only.