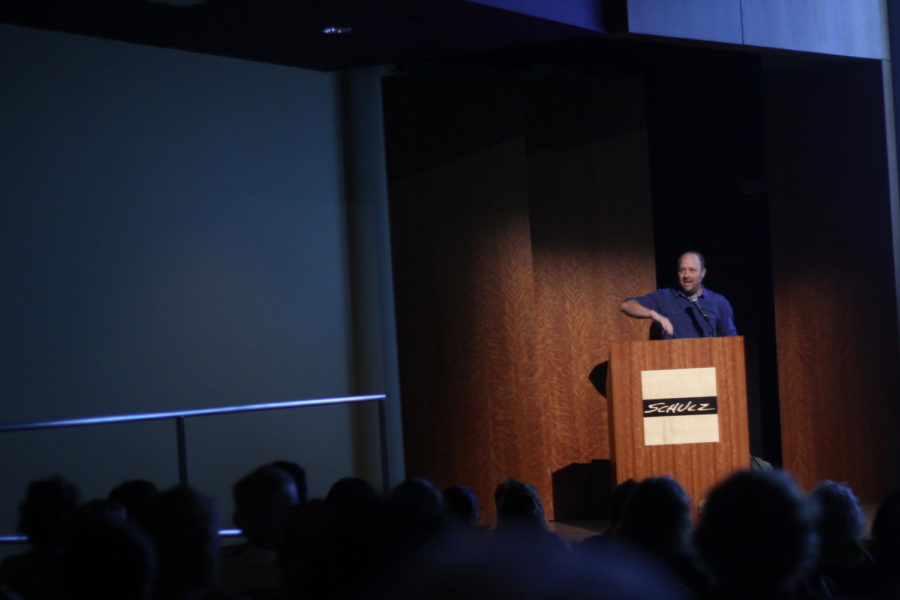 Jay Asher explains the story behind his best selling novel, "13 Reasons Why." Asher gave a presentation at the Charles Schulz museum on Sep. 2.

Conflict, mystery, love and suicide; all prominent themes in “Romeo and Juliet.” But what once reigned as the greatest love story has been dethroned to a story that has reached the hearts of a generation.

No modern writer has impacted an audience more than Jay Asher and his bestselling novel, “13 Reasons Why.” His novel highlights the tragedy of Hannah Baker, a junior at Liberty high school who abruptly takes her life. The twist, however, is that she provides thirteen tapes containing the reasons why she killed herself which eventually fall into the hands of Clay Jensen, a remorseful lover and active participant in the tapes.

Ten years after the initial release of the book and almost one year since the launch of the television series, Jay Asher came to Santa Rosa to pay tribute to the Charles Schultz Museum and to spread his message of hope a little further and explain the difficulty he faced writing “13 Reasons Why.”

While the majority of his fans praised his work, Asher transitioned his tale to another platform where his message could reach a larger audience. When he gave Netflix the green light, he never knew how popular his book and show, would become; although he was fully aware of the controversy surrounding it. Subsequently, he received mixed responses from his readers.

“People say that about the book, that it ‘romanticized’ suicide. With a television show, everything is bigger and you hear about it a lot more,” said Asher.

When Netflix premiered the first season of “13 Reasons Why”, some viewers felt that they handled the issue poorly, some even stressed it “romanticized” the process of suicide.

“At first it was very painful to hear, because obviously, I knew why I wrote the book and what inspired the book, and from the first day the book was out I had readers, usually teens, emailing me sometimes saying the book saved their life, or it made them realize maybe they needed to ask for help, or it made them realize one of their friends was really hurting and they were overlooking the signs.”

Asher chose to write about a controversial topic in hopes to reach an audience that needed to hear it. He received emails daily from both fans and critics, with a majority gratuitous for his efforts,

While some argued the situation was handled poorly, others took the extra effort to try and get the book banned.

Additionally, he added: “No matter how you write about this issue there’s going to be people saying it should have been handled the other way. And the alternative, if you don’t want to have any criticism, is to not deal with these things and to me, that wasn’t an option.”

A non-disclosed relative of Asher’s caused him to realize the absence of conversation surrounding suicide.

“With my relative, that was part of it; she didn’t see people talking about this stuff or they would talk about it in a cliché way when she didn’t feel comfortable asking for help. And I think you have to write about it very honestly so that people who are hurting can know, yes, it’s uncomfortable, but you need to talk about it and it’s okay talking about it.”

During his presentation, Asher revealed how his career began, and how long it took to truly publish “13 Reasons Why”, originally titled “Baker’s Dozen,” which was later changed by the publishers.

He made the last edit to the book on Christmas Eve 2006, which had been rejected 12 times before, and finally sold on the 13th attempt; a perfect conclusion to his journey of the thirteen tapes as they explored the difficulties of suicide.

Now, Asher gets to relive his journey with his characters through the creation of the Netflix series, filmed and cast in Sonoma County, which is almost a mirror of the original setting of the book in Asher’s current town of residence, San Luis Obispo.

“In my mind, I pictured the town of ‘13 Reasons Why’ like my town and I know they were envisioning something similar as well,” Asher said. “They were looking for a place with lots of trees, [but] not a big city, which is like where I live.”

Although Asher did not make the decision to film in Sonoma County, he describes his first encounter vividly.

“When I saw some of the houses they were using, I’m like ‘Yup. That’s like the picture I had in my mind,’ so I think this area is absolutely perfect for how it looks and it’s been fun to get to know some of the locals who have been extras.”

As the show now films its second season, Asher commented the main difference between his book and the series was how the series developed all of the characters, as opposed to only focusing on Clay and Hannah.

“To me, in a way, it was a perfect adaptation. I wrote the book one way because I wrote it as a book. If I wrote it for television, I would hope I would write it as well as they did,” Asher said

He also confirmed the symbolism behind the cover art, stating that the original cover showed a playground behind Hannah, representing the loss of innocence and emphasizes the dramatic tone of the novel.

Amongst the jokes sprinkled between personal anecdotes, Jay Asher only confirms that he is as genuine as they come. With “13 Reasons Why” skyrocketing to fame, Asher stays true to his core values and remains passionate to create discussions revolving suicide in hopes of saving those who feel alone.

If you or anyone you know is in danger of harming themselves, please call the National Suicide Hotline at 1-800-273-8255.